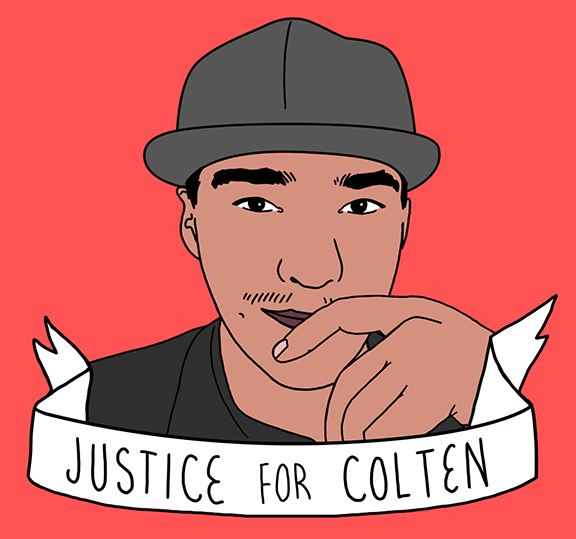 Colten was a 22 year old man who was murdered on Tuesday, August 9. He was out for the day with friends. On the way back home they got a flat tire. They drove down a farmer’s lane to get help. They chose the wrong farm. While sitting in the back of the car Colten was shot by the farmer whose laneway they drove down. In one article I read the farmer’s wife was reported as saying “that’s what you get for trespassing” to the surviving friends.

Last week the farmer, charged with second degree murder, pleaded not guilty and was let out on $10,000 bail.

After Colten’s murder was released in the news social media was full of people posting in support of the farmer, Gerald Stanley.

1 person posted “In my mind his only mistake was leaving 3 witnesses.” That person was Ben Kautz. Kautz is (was) a councillor for Regina. He was not fired for his post that advocated for the death of 3 people. Rather, he “offered to resign” after social media responses to his post put pressure on him. Kautz’s wife was reported as saying “My husband removed his comment. I wish we could just leave it at that.”

Kautz himself said “It was a stupid thing to say. It wasn’t serious, (but) the damage is done. I’ve got to live with it.”

Why the callousness and such disregard for the lives of these young people as well as lack of grace for what the mourning family, friends and community of Colten’s must be going through? Because Colten was from Red Pheasant First Nation. Colten, as an Indigenous male, was in the wrong place at the wrong time looking for help from a bigot.

Another city councillor was reported saying about Kautz’s comments ““I think everybody says something sometimes that they regret 10 seconds after. I don’t think you’re human if you haven’t.”

Equating hate speech as something we all do? Only people with bad hearts say things like this and don’t consider the weight, the impact and the hurt those words have.

I have been in arguments with people that say Canada isn’t racist. I have had one person concede that that racism is well – “benign racism.” I am not really sure what that means as racism is never benign. Maybe it means that if that person doesn’t have a weapon that the person on the receiving end of the racism won’t be injured or even worse killed, that racism in Canada is different because the gun laws here differ from the States? Maybe Gerald Stanley’s Canadian brand of benign racism might have had different results if he wasn’t holding a gun that he felt justification for shooting because they were on his “property.”

A life has been lost, a community impacted and the other young people with Colten that day have to carry that trauma now throughout their life.