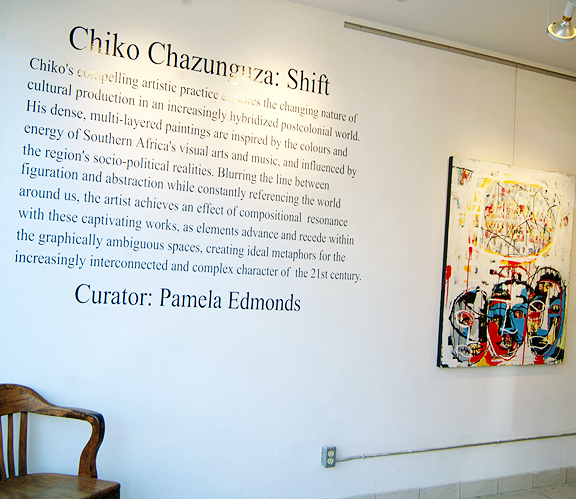 Reflecting on the Traditional in Transition

Perhaps the most obvious comparison one might make upon seeing Chiko Chazunguza’s paintings would be to the work of Jean-Michel Basquiat. But to stop there would be like experiencing a Wifredo Lam painting in the Cubist style and expecting that its inspiration followed the same trajectory to creation as a painting by Picasso. Like these masters of Cubism, Chiko and Jean-Michel punctuate the compositional conversation with some shared visual shorthand and technique but the point from which they leap off of is, like Lam and Picasso, individually unique and located within their own cultural specificity.

Originally from just outside Harare, Zimbabwe, Chiko spent seven years in Sofia, Bulgaria on an art scholarship. While in Sofia he “was trained in the classical modes of printmaking, drawing and painting”. Upon arriving home though Chiko realized that in order to expand as an artist he would have to enter back into the culture of his youth so he could find a visual language that would be his true to his way of scripting a story.

“I wanted to pick a language I could use that was compatible to my history, my tradition.” 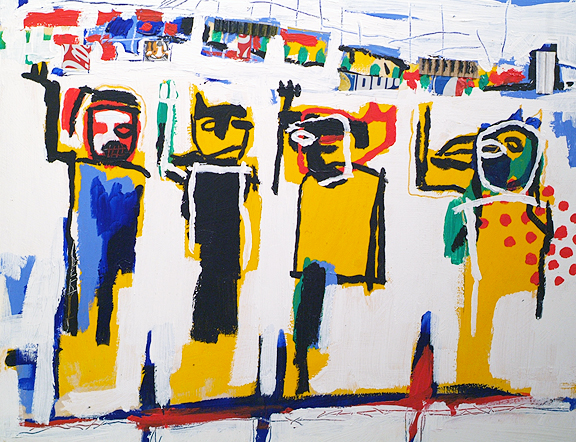 The inspiration of mis-registration, the effect given by the areas that overlap and bleed out in screen-printing, seemed appropriate for this cultural provocateur. It was Chiko’s experience as a printmaker that made him “approach painting with an attitude of non-conformity”, to shift the paint just outside the lines. This overlapping and layering, inherent in the process of screen printing, spoke to the layers of culture – traditional tribal, leftover colonial, urban contemporary – that blanketed Zimbabwe in repression upon Chiko’s return.

“It was like being in Sofia during the breakdown of the old regime. Communism was kicking its last kicks was a dying horse and the political condition that I arrived home to was much the same.”

But it was not until another move, another cultural relocation, that Chiko began the collection and style of paintings showcased at the  B.A.N.D Gallery for his show SHIFT.

Upon moving to Canada this artist, who is known back home for his installations that poke and prod at the socio-political contentions of a country in flux, picked up a pop can then oddly enough was inspired to paint. 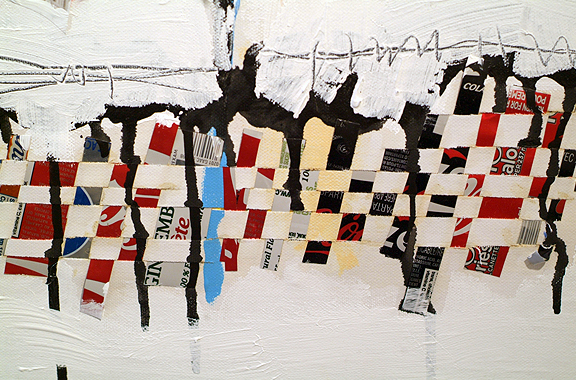 It was the omnipresence of aluminum soda cans in Canada and their ease of acquisition that made them fitting as a symbol for consumer culture. Along with being ubiquitous they were durable – omni-persistent! 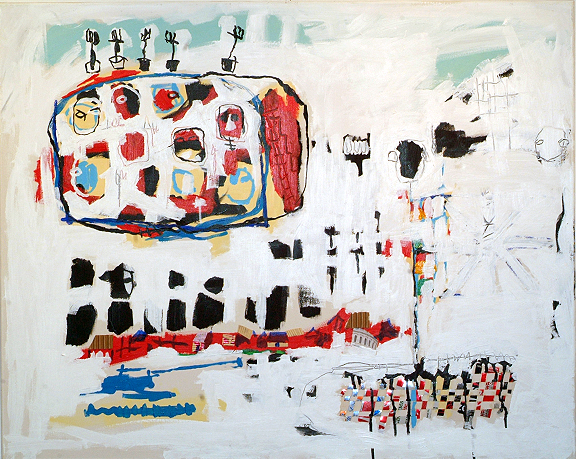 It was the “generousity of Canadians” who upon hearing he was an artist stocked him up with paint that got him started in combining the two materials to continue his theme of “reflecting on the traditional in transition.”

“Here food is always being advertised. It is at your doorstep, in your mailbox. Pop is a drink that is not necessary but it is always in front of you.”

Juxtaposed with hard memories of scarcity back in Zimbabwe, where people had to line-up single file into endless rows for basic staples, a vision was realized for a new body of work.

“Line-ups and people waiting in suspense for something to come, that was my inspiration…these line-ups look beautiful in their own way and you can almost forget the struggle…When there is a crisis, a shortage of basic commodities people behave differently and visually this informs.” 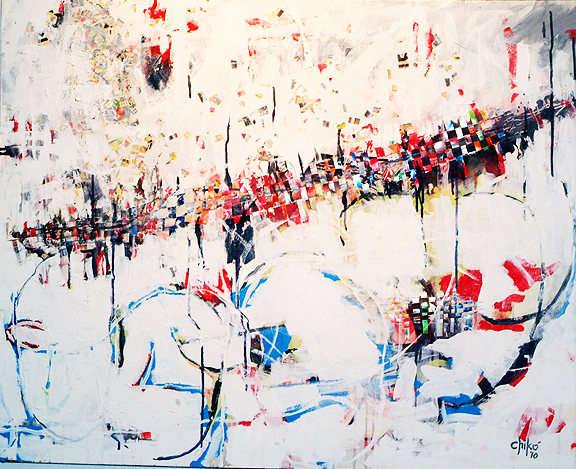 Shifting our Ideas of Who We Are

Many of the paintings in the SHIFT show come with pop cans, liquor labels and food advertisements cutting through the canvas like interruptions. They are then woven over, around and through deconstructed figures, busy heading nowhere in never-ending cues for food, for water, for life. Urbanization in Zimbabwe led to the inability for one to produce his or her own food which had been the previous traditional practice.  A population of producers turned into a population of dependent consumers enmeshed (like the cans in Chiko’s work) in the ebb and flow of changing regimes.

“The figures are multi-faced; the disfiguration is because one’s face may change into all sorts of faces in that queue.”

While waiting in line with a stranger one can “start chatting, become friends, fall in love.” But by the end of the line the friend becomes the enemy and the lover a foe if one gets the last ration with nothing left for the one behind. 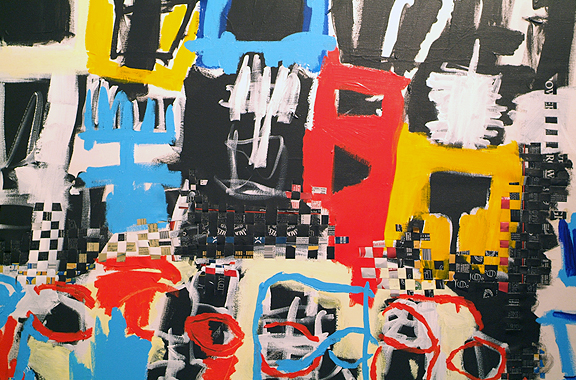 Although the painted experience in Chiko’s work is intimately personal the anonymous quality of the figures in his paintings let them become the every(wo)man, no longer a “them” but an “us” as together, in this contemporary context, we face a future of scarcity on a global scale.

Following in the tradition of artists like the aforementioned Wifredo Lam we can see that Chiko, for his inspiration and call to action as an artist, draws from the common experiences of humanity in transition.

“Through art, I reflect upon how issues such as spirituality, disposition, denied access and interference with basic commodities, and the painful evolution of ancient cultural traditions into contemporary yet uncertain urbanized communities, all shape and shift our constructed notions of identity.” 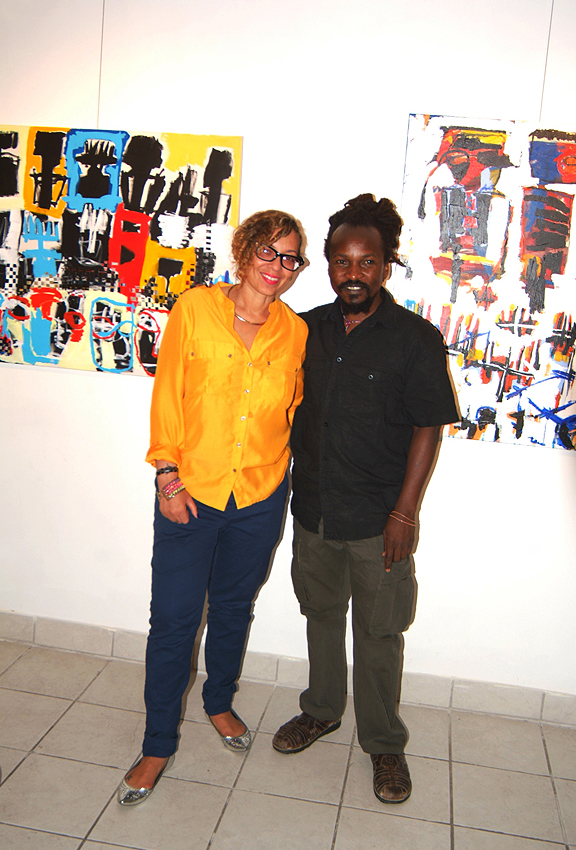 More of Chiko’s work can be viewed on his website www.chikochazunguza.ca or until March 31st at the The Lorraine Fritzi Yale Gallery in Ottawa, Ontario.

All photography by Leah Snyder for Mixed Bag Mag.