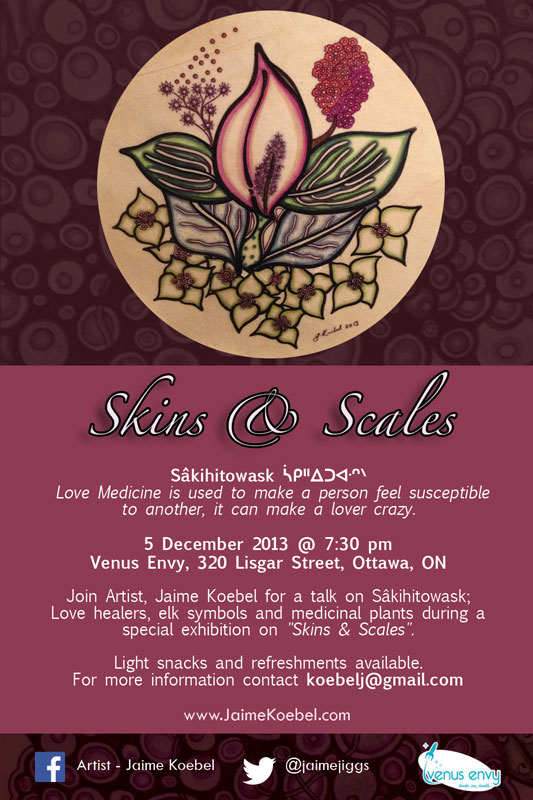 If you are in Ottawa tonight “Skins & Scales” promises to be an interesting event!

The exhibition will feature a talk by the artist on Sakihitowask ᐊᒐᐦᑯᐢ or Love Medicine and the use of plants, elk symbology and love healers in her artwork.

In addition to the Skins & Scales exhibition & Sakihitowask ᐊᒐᐦᑯᐢ: Love Medicine talk are five Indigenous artist who will share stories of burning love:

Jaime is Metis from Lac La Biche, Alberta. She is an artist, a performer, an educator and a public speaker located in Ottawa, Ontario.

Her inspiration for her artwork comes mainly from her Metis heritage, particularly flower beadwork and plant-life. Her German grandmother would often tell her so much about plants that she became interested in their medicinal qualities and how she could connect those qualities to the human spirit. The artwork she creates ranges from images on drums, tattoos, logos, fish scale art to beadwork. When she creates inked images on drums she free-hands the style most times and each one is unmistakably unique!

Drop in for snacks, poetry & stories, and to check out, appreciate (maybe even purchase) beautiful art”