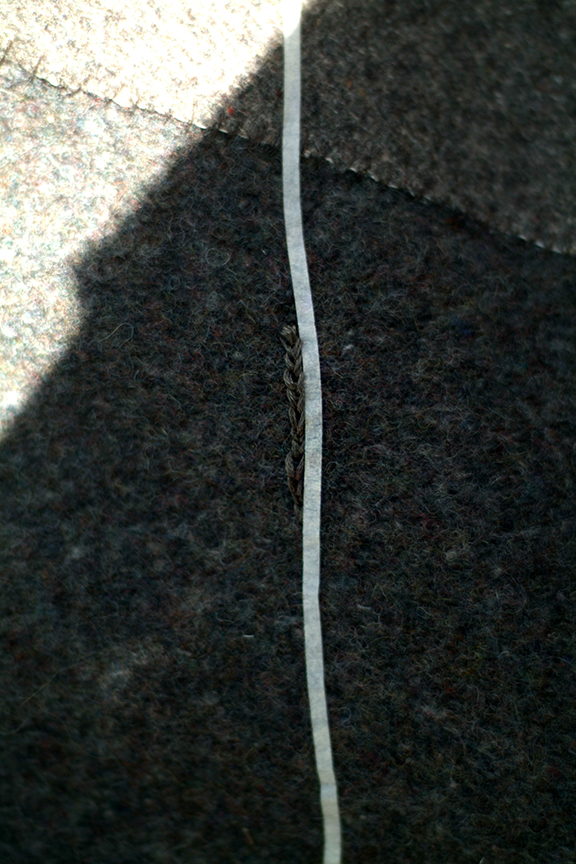 As our long winter was on it’s way out and a new spring beginning an interesting initiative began here in Ottawa. Vicki Heyman, wife of US Ambassador to Canada Bruce Heyman, launched Art in Embassies, a project started by John F. Kennedy as way to share the talent of American artists abroad as well as “start cross-cultural dialogue“.

Maria Watt was the American artist chosen to open what has become a series of events focused on the role of art as a catalyst for social change. The timing seemed oddly predestined. Marie, a woman of mixed Settler / Indigenous heritage sat on the stage at the National Gallery of Canada speaking to Greg Hill (the NGC’s Audain Curator of Indigenous Art) about the connecting quality of her work.

“My work draws from my experience as a Scottish German Seneca person in the US growing up in Oregon…[I explore] Indigenous moments in history and European history – those nexuses.”

This was on the eve of the Roundtable Discussion on the Missing and Murdered Indigenous Women and Girls that was also taking place in Ottawa that week. On the Friday, as Carleton University was hosting the National Roundtable, the Carleton University Art Gallery (CUAG), in collaboration with Art in Embassies, was holding a roundtable on Indigenizing the Gallery with Marie as the honoured guest participant. If a nexus “is a series of connections linking two more more things” than what was happening at that precise moment in Ottawa, in the social spaces where art, academia and politics converge, was a moment where Indigenous women’s voices were being prioritized. 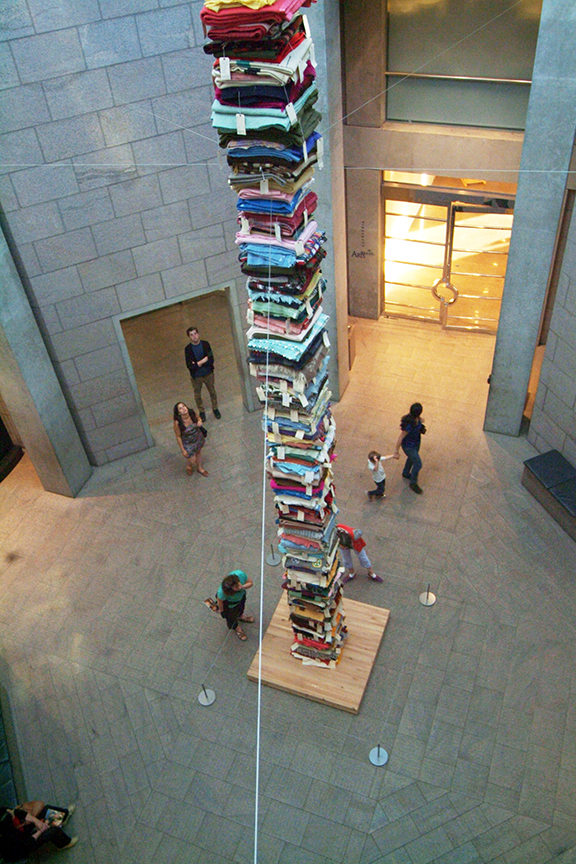 One of Marie’s well known works is Blanket Stories: Seven Generations, Adawe, and Hearth. The piece was installed during the National Gallery of Canada’s Sakahàn: Indigenous International Art exhibit and true to Marie’s practice it involved sending a call out to participate. A request was made for anyone who wanted to contribute to drop off or mail out a wool or natural fiber blanket to the NGC. The original call out on the Sakàhan website describes how the installation:

“will highlight the rich history of commerce and trade in Ottawa. The word “Ottawa” comes from the Algonquin word adawe, which means “to trade.” 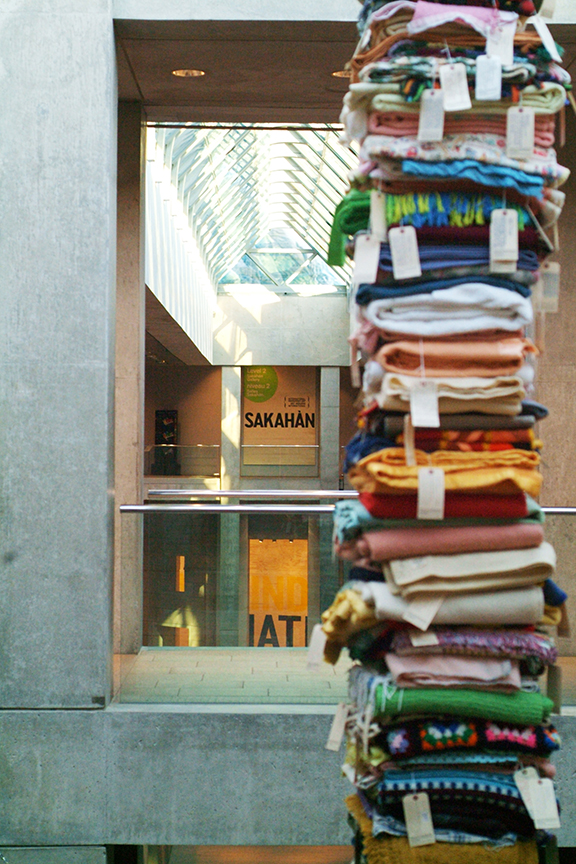 Along with their blankets participants were requested to write a story that illustrated the importance of that blanket to their family. The stories become the currency and their richness is revealed in their ability to criss-cross countries and cultures, span many generations and fuse past with present. With her works involving blankets Marie does what she can to have the stories available for audiences to read (view some of stories from the NGC install here). At her National Gallery talk she related a few of them to us. One story was Peter’s. The blanket he gave to Marie came from a concentration camp. If I remember correctly, it was his wife’s and it was all she had when she was liberated from the camp. Eventually that same blanket would be used to wrap and protect art work purchased by the couple in the life they created together. Marie feels that such a story flies in the face of Hitler’s denigration of art and is a perfect symbol of reclamation – a blanket’s meaning transformed by its new role.

The stories are also ways for people to enter into the intimate space of another. In this complex historical moment where we struggle to understand the meaning of words like reclamation and reconciliation sometimes the way of navigating that complexity is through the simple act of creating a space for people to share moments. This is the strength of the Art in Embassies initiative which has been infused by Vicki’s desire to explore art as social practice precisely because it can build bridges and foster understanding between disparate social circles. As a way of gathering a diverse group together for a common goal, another event that was held as part of Marie’s visit to Ottawa was a sewing circle. It was moving to see people of all backgrounds, ages, and genders stitching together in the Great Hall at the National Gallery. And the artist was present! Marie took the time to speak with people as well as listen to new stories being shared. For Marie, it’s about being affable in her process. As she says, a sewing circle is about “tucking yourself into something as humble and familiar as cloth. It’s a safe space that’s a much more informal space – getting together in a neighbourly way.” 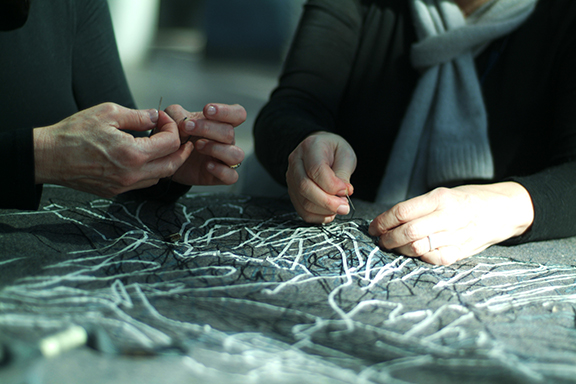 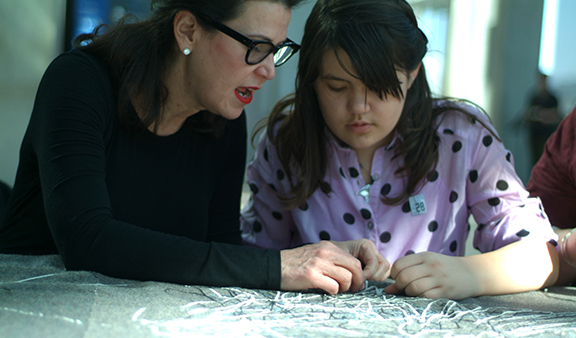 In these informal spaces people can digest what they might otherwise feel challenged to confront. Marie’s work, although not overtly political, is charged by a political climate that does it best to ignore Indigenous rights and a national leader who publicly declared that the issue of #MMIW (Missing and Murdered Indigenous Women) as not “really high on our radar.” As a Seneca woman she uses her art as a way to generously share Indigenous teachings to a non-Indigenous audience. 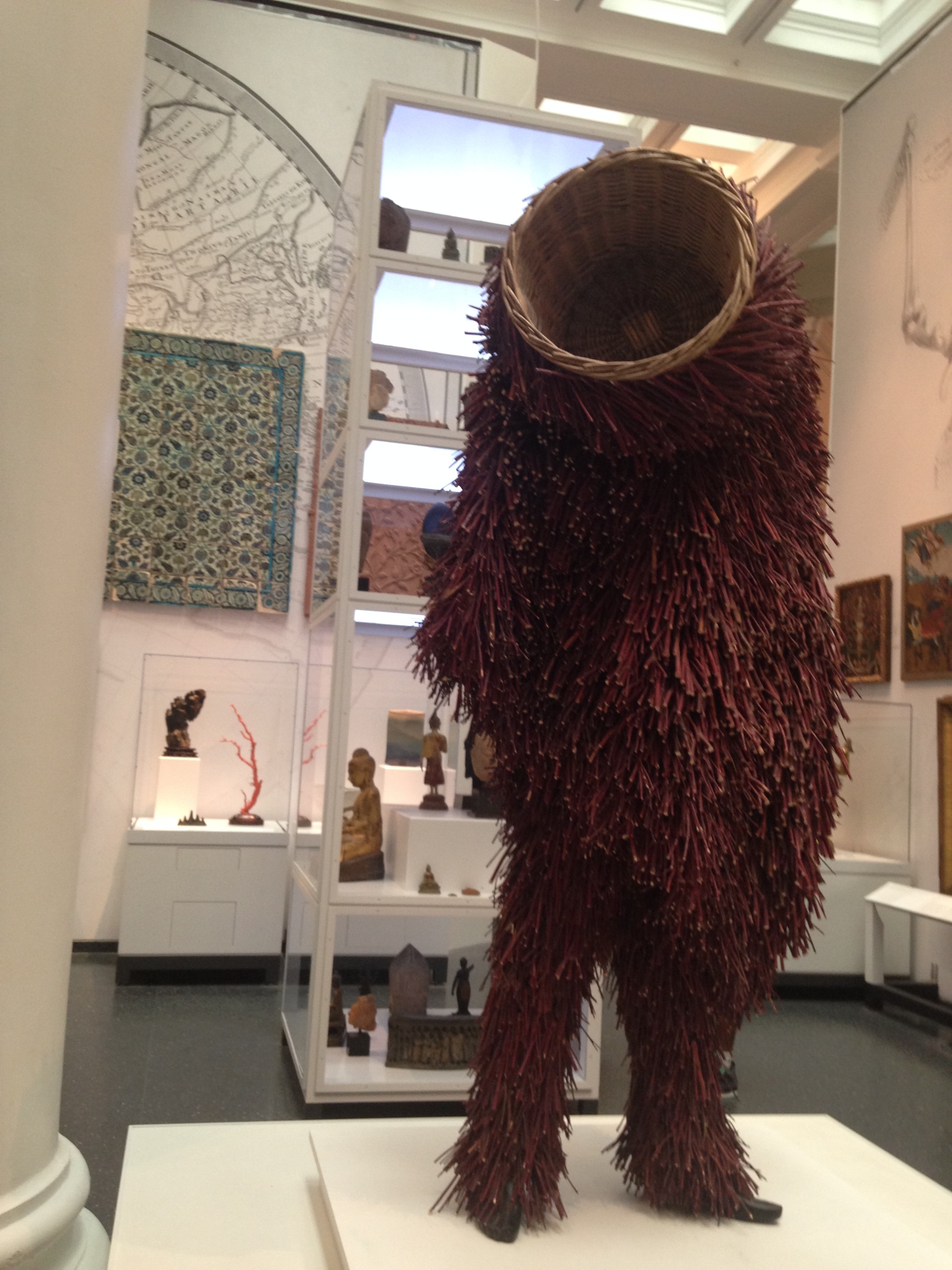 The next artist speaking as part of the series is Nick Cave. Nick’s work is also about looking at social as well as disciplinary nexuses of art, dance and fashion. Like Marie, he uses the act of sewing and assemblage to move a challenging conversation forward. The intense subject of racial profiling prompted Nick to look at ways we disregard and denigrate. His first “soundsuit” was created by gathering discarded sticks and twigs, the things that surround us during our day that we ignore and allow to become invisible. The final product functioned as both apparel to be worn by a dancer during a performance and sculpture to be inserted into a gallery space. Whether still or animated by performers whose race and class are concealed inside the soundsuits, Nick’s work is meant to break open a space. They are impossible to ignore. As performers climb inside they have a chance to access the feeling of being connected with something seemingly foreign from their everyday but yet some of the materials that Nick utilizes, like Marie’s blankets, are humble ones that are familiar to all.

Again, the timing of this event is important. After months and months of the heaviness of how racial profiling is being executed – literally – by agents of power, we need to widen the discussion around race that has been split open by the murders of black men at the hands of the police. The problematics of race isn’t just an American issue. Here in Canada the erasure of Black bodies in cultural, academic and political institutions has the potential to fester and become a much deeper problem. We need to have the challenging conversations immediately and those conversations have to happen in places like the National Gallery of Canada, an institution where Black contribution to Canadian history and art has been close to absent. No time like the present.

I applaud the audacious spirit that Vicki has brought to the cultural table here in Ottawa and I look forward to participating in more of these types events that create a nexus for change by widening the circle of social influence.

You can follow the conversation at #artconvoAIE. More events will be coming up in 2015!