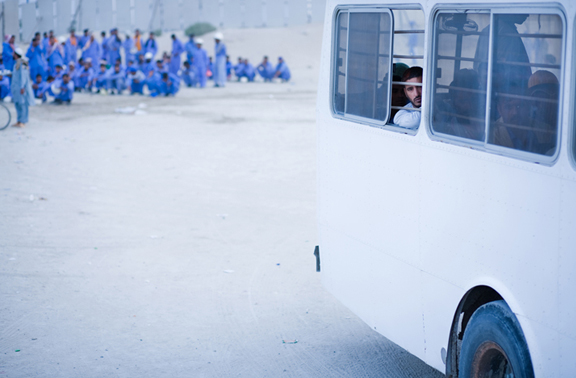 “brings together artists who explore the tenuous relationship between identity and place, and who investigate how movement has become a mode of being in the world during an era of globalization.

The month-long exhibition will feature established and emerging artists from Toronto, Calgary, and Vancouver, and highlight their aesthetic engagements with cultural dislocation. Artists Annie Sakkab, Meral Pasha, Mona Kamal, Jin-me Yoon, Brett Gundlock and Jamelie Hassan consider how we negotiate a place for ourselves from one social environment to another. 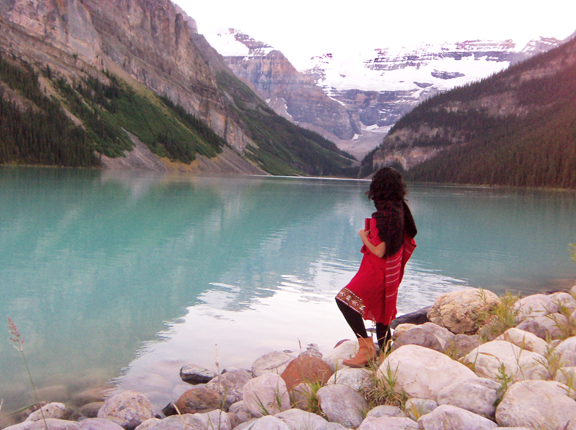 They examine what travels with us across personal, political, and social borders during different kinds of migratory trajectories, and what we leave behind. As discussions on place and identity have shifted towards more fluid understandings, these artists engage with particular kinds of uprootings and regroundings that are embodied and specific. Their work articulates a sense of self which is gendered and cultured, and explores how visual culture informs the way we see ourselves in the world, as well as how others situate us in it.

The exhibition will launch the opening of the new Riverdale Hub Community Art Gallery and its arts programming which is geared towards community development. Located in the heart of Little India in Toronto, the Riverdale Hub provides invaluable hands-on training opportunities to marginalized women and their families, enabling them to develop sustainable livelihoods.”

Curators Sevan Injejikian and Annie Sakkab are looking for your help to contribute to their crowdfunding campaign on Indiegogo.

“With your contribution, we will be able to establish a new gallery in the heart of Little India, further the Hub’s goal of engaging the community in dialogue through art, and present the work of 7 established and emerging contemporary artists who address experiences of migration.”


Images by Annie Sakkab, Untitled, from the series Projections – Ghosts of Dubai’s Boom, 2008

“Exploring the photographic medium as a way of seeing, this year’s Festival theme, Field of Vision, frames a series of primary exhibitions and public installations.”

What lies outside our own field of vision? From gender to sexual orientation; culture, race, place; nature vs the unnatural; the understanding of new technology, the experience of a physical disability…

…sometimes it takes truly seeing what is right in front of us in order to shift our focus.

As artists, photographers will manipulate light, context, and composition to suit the telling of a ‘Truth’.

They use photography to explore how best to let someone into a world they might not be aware exists to experience stories they may not be able to hear. Something about seeing can move people into believing. An image can authenticate an experience not just for the artist but for the viewer.

“From the age of 14 – 17, the Toronto-based photographer Janieta Eyre developed a disorder that made it impossible to speak. As a consequence, many people gave up attempting to converse with Eyre and instead behaved as if she did not exist. The imposed silence and isolation had a curious effect on the artist’s development: in her silence, she began to have strange thoughts and to wonder if she was, in fact, invisible.” Read more…

“Using professional lighting and a medium-format film camera, Levine creates a studio within each home environment, positioning objects that appear within the frame. These settings explore private queer space as a realm for the development of community and the expression of genders and sexualities often marginalized within the public sphere.” Read more…

“Unreleased explores the gap that can exist between a person’s sense of belonging within a culture, and the culture’s opinion of that person. In this work, 2Fik performs multiple visions of “self,” while exploring the positive and negative prejudices that accompany visual perceptions of the “other.” This exhibition presents a series of dramatic tableau photographs in which characters from different cultures meet and evolve.”  Read more…

“Dislocations brings together artists who explore the tenuous relationship between identity and place, and who investigate how movement has become a mode of being in the world during an era of globalization.” Read more…

NOTE: If you would like to contribute to the Dislocations Exhibit funding campaign click here for their Indiegogo Campaign.

“Deliberately referencing the constructed aesthetic of digital image-making—the pixel, the choice of red, green, or blue tape, and the surface/depth tension of altered focus—Miyoshi’s analogue self-portraits use metaphor to evoke a slew of contemporary questions about the status of the photographer/author and the referent/real in the digital age.” Read more…

NOTE: This exhibit closes May 11

“In recent years, Meryl McMaster has travelled to remote landscapes on journeys that have helped her begin to understand her place in the natural world. These processes of self-discovery continue when McMaster returns to her studio and incorporates what she has learned into her art practice through the exploration of new themes. In-Between Worlds is an expression of one of these themes: McMasters bicultural Aboriginal-European heritage, which she views as a synergistic strength rather than a struggle between opposing forces.” Read more…

“ The images have a surreal and ethereal quality that blurs the viewer’s concepts of space and reality. Pesce’s photographs depict both explicit and implicit narratives that investigate the idea of objectifying the female body.” Read more…