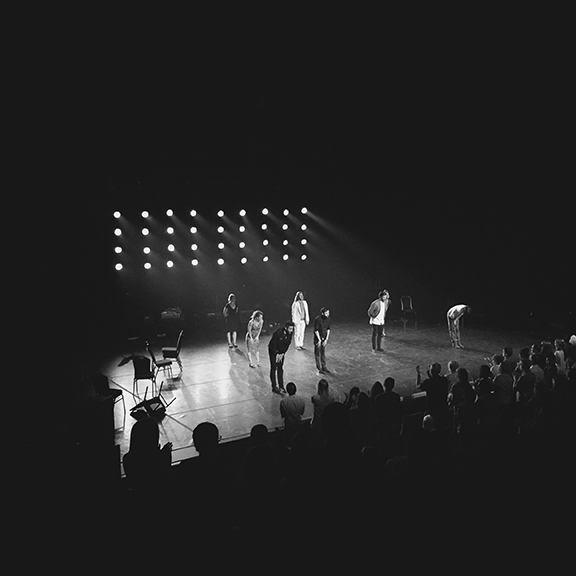 This weekend is your final chance to participate in Canada Dance Festival 2016!

“Like Gravel’s previous works, Usually Beauty Fails was created in close collaboration with the dancers and musicians of Grouped’ArtGravelArtGroup. In this surrealist and unbridled metaphor on our relation to beauty, Gravel creates an intensely physical exploration of everyday movement. The dancer’s combinations of physical restraint and furious motion collide with their charming sweetness and casual bravado to produce an invigorating work that challenges our perspectives on dance, beauty and society itself.”

Esmeralda Enrique will perform as part of Saturday’s Older & Reckless

Tomorrow night the Festival closes with Older & Reckless at the Arts Court Theatre.

“Making its Canada Dance Festival debut, Older & Reckless is an acclaimed dance series gaining notoriety for its celebration of mature dance artists and their tenacious life-long pursuit of physical expression.  Appealing not only to a senior audience, but to all generations, Older & Reckless shines a light on those Canadian dance artists who have dared to approach mastery in their art form.”

Also, on the agenda this week was a Roundtable on Pluralism hosted by the Canadian Dance Assembly (CDA) and CDA’s Pluralism Committee. “Pluralism, diversity, and equity are urgent issues; the dance sector is seen as a leader compared to other disciplines, but what do we really know? ” The result was important discussion on the role CDA can play in taking the Truth and Reconciliation Commission’s Calls to Action and implement them into policy, process and performance at the CDA.

There are still tickets available for today and tomorrow’s performances. Check the full schedule here also follow along on twitter at #CDF2016. 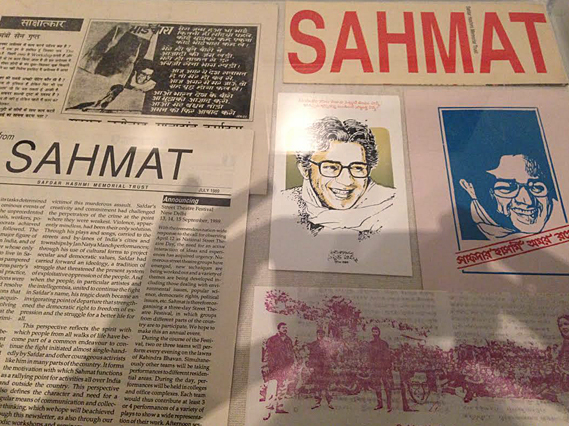 The Sahmat Collective is another great show at the AGM!

I recently had the chance to get in to the AGM to see this incredible show. The Art Gallery of Mississauga isn’t exactly small and it isn’t exactly large but it seems to be the optimal amount of space and it’s always beautifully utilized. The corridor that takes you into the main gallery feels like an intimate welcome that primes you for what lies ahead. There is also a cave-like alcove that works perfectly for video installations. Every time I see an exhibit here I am impressed! 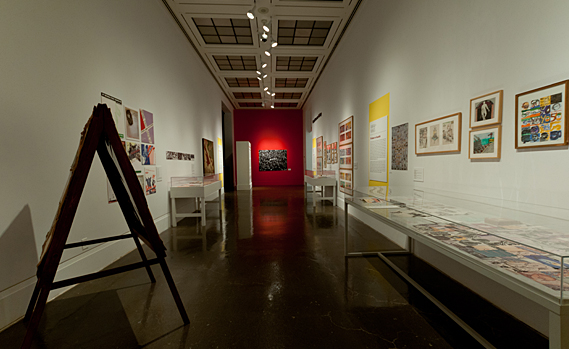 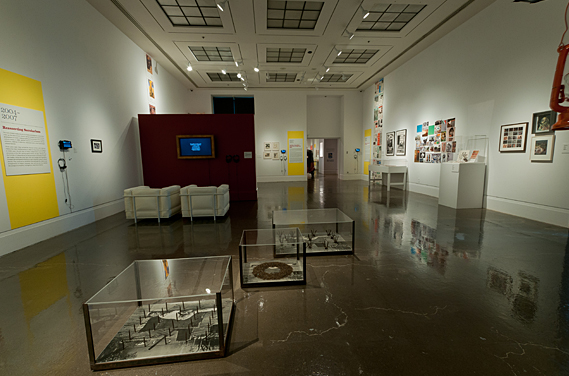 Above images of gallery space courtesy Art Gallery of Mississauga.

The AGM is a gallery that is doing a tremendous job making their institution relevant to the broader community of Mississauga – one of the most culturally diverse in Canada. Their current exhibit The Sahmat Collective: Art & Activism in India since 1989 uses up almost every available surface in the gallery to create a time capsule of India at a moment in her history when culture clashes were reaching a boiling point. 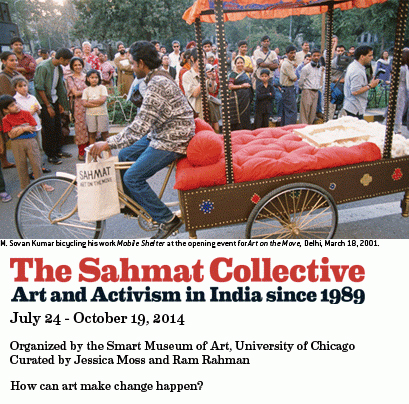 “Since 1989, the influential Delhi based Sahmat Collective has offered a platform for artists, writers, poets, musicians, actors, and activists to create and present works of art that promote artistic freedom and celebrate secular, egalitarian values. The collective formed in the weeks after playwright, actor,and activist Safdar Hashmi was fatally attacked by political thugs while performing a street play. In the more than twenty years since, Sahmat has drawn on India’s secular heritage and an expansive group of collaborators to produce a series of projects that engage in important political and social debates through a mix of high art and street culture.” Read more… 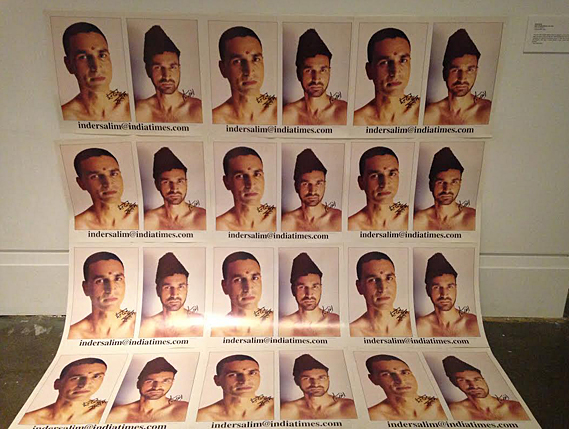 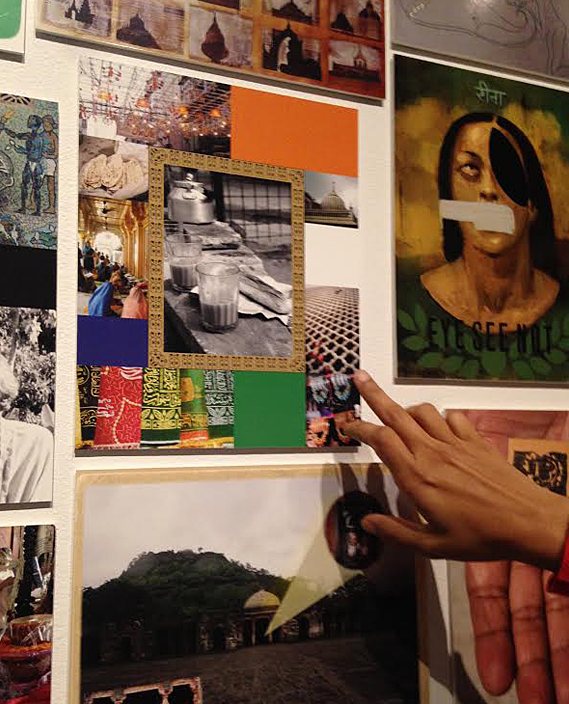 I walked through the show with a friend who had grown up in Gujarat. As a Muslim she had memories of the religious conflicts. The exhibit timeline reached back to touch her early childhood. The Sahmat Collective was the result of a reaction to what was taking place around her, her family and others at this time.

Ways of Resisting from Smart Museum of Art on Vimeo.

In urban settings where much of the population comes from abroad arts institutions can become midwives for the emergence of memories that provide a link to the motherland left behind. Galleries can give the members of their community an emotionally deep experience by participating with memory, not as nostalgia, but rather as place to locate dialogue that can impact social change here in Canada.

As part of the programming for The Sahmat Collective show the AGM did just that. “Thinking Globally, Acting Locally” was a panel discussion on “Art, Activism and Artist Collectives” that included Canadian artist duo Condé + Beveridge activists / artists whose careers stretch back even father than 1989. The panel posed the question:

“What is the role of the artist collective and what is the relationship between art and activism from both a global and local perspective?”

Galleries should also be looking at the spiritual topography that New Canadians layer onto the land as a way to be relevant to more diverse audiences. “Stories of our Landscape | Conversations after Sahmat” was an event that brought people out to ride along in the “Architecture Bus Tour” for “an introduction to the migration of various religious architectural traditions to the Mississauga cityscape.” 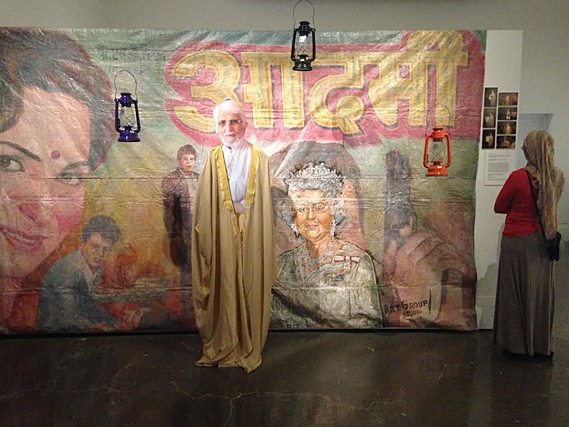 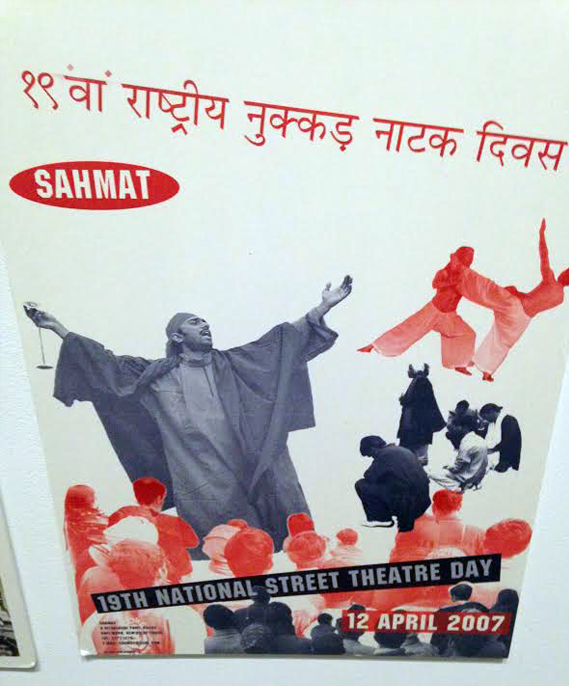 “animated by the urgent belief that art can propel change and that culture can reach across boundaries. Sahmat has offered a platform for an expansive group of artists and collaborators to present powerful works of art that defend freedom of expression and battle intolerance within India’s often divisive political landscape. Based out of Delhi, the Sahmat Collective uses a combination of high art and street art to resist forces that threaten the pluralist and democratic spirit of creative expression in India. In conjunction with this exhibition, the Art Gallery of Mississauga presents programming that interprets exhibition themes within the Canadian context to critically examine the role of the artist collective, the relationship between art and activism and the ways in which art has the capacity to make change.” Read more…

In plurality their is unity. With unity comes strength.

To explore The Sahmat Collective further visit Vimeo for a selection of videos that give an informative background of their rich practice. 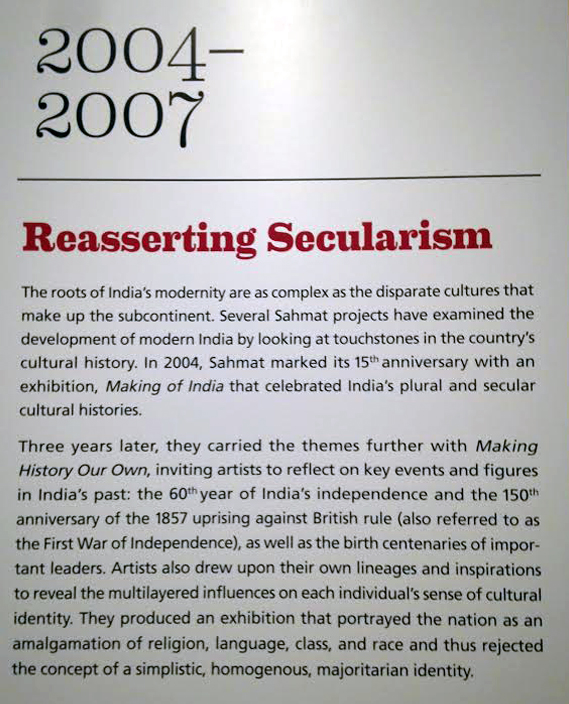 In the reality of each of our lives lies the potential for magic.

The stories of Salman Rushdie often centre around hybrid places and the impact they have on the psyche of their inhabitants. His characters labour with the problems that can arise with religious and ethnic pluralism. The characters in Midnight’s Children, a story set at the birth of India’s Independence, flesh out a history whose fecundity is ripe with possibilities but also all the pitfalls that come along with a diverse population in competition for their own interests.

The story of Midnight’s Children revolves around Saleem Sinai, a baby boy born at the precise moment of Independence, whose divine timing, as he says makes him “handcuffed to history.” Through his adult eyes we go back with Saleem to witness the importance of his birth and how it plays out in his life. Even the normal moments of his childhood that like so many of us involved bicycles, movie theatres and games of hide & seek, upon reflection become mythological in proportion. We join him in his search to connect the dots of a painful life that was not without its own beauty and his special gift that flips like two sides of a coin between being a blessing and curse.

In the book I enjoyed the twists and turns that the characters take along their migratory paths criss-crossing the sub-continent as well as landing in the newly formed Pakistan and Bangladesh. Rushdie’s tales are deeply layered and I appreciate the history lesson one gets when reading a Rushdie novel. I love his choice of using magic realism because the genre allows him to pierce the mystical qualities of life to show how simple moments, like a child born at the stroke of midnight, can be the stuff of legends.

In the movie I enjoyed Canadian director Deepa Mehta’s intimacy in her choice of shots. She allowed us to get very close to the characters which added a warmth to them that I missed in the book because it was so densely packed with historical details.

The other special elements in the movie was the choice to use Rushdie as the narrator and voice of Saleem Sinai as well as the moving musical score by the brilliant British composer Nitin Sawhney.

The book and the movie  each stand on their own but MIXED BAG MAG recommends treating yourself  to both. It is worth what you come away with – the idea that in the reality of each of our lives lies the potential of magic and the elements that myths are made of.