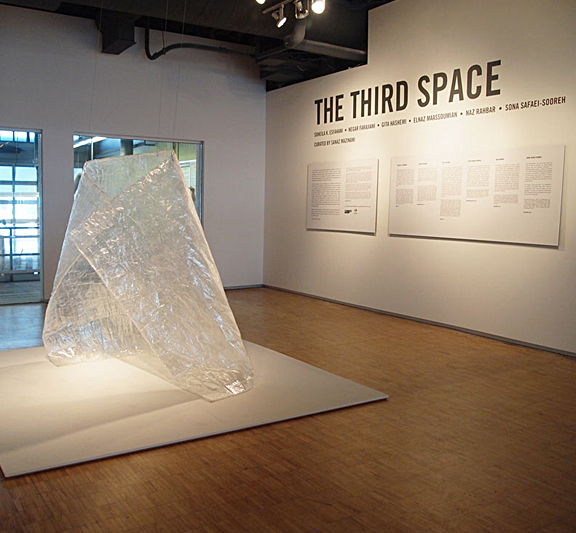 Curator Sanaz Mazinani’s show The Third Space is wrapping up this weekend at Toronto’s Harbourfront Centre. MIXED BAG MAG caught up with this busy and multi-talented woman whose career as an artist, educator and curator has her bifurcating herself between Toronto and San Francisco. In the second part (read Part 1 here) of MIXED BAG MAG’s look into the work of contemporary Iranian art Sanaz offers historical background to the contemporary foreground of some of the work included The Third Space and the symbolic and visual power of script.

The History of Calligraphy in Persia

Persian Calligraphy has had a significant effect on the enhancement of Persian arts and culture. The various Iranian Calligraphic styles, such as Taliq, Nastaliq, Naskh, Thulth, Reqa, Towqi, Shekasteh, and Kufic each carry with them an emblem of an era of history. These decorative scripts allow the reader to visually enjoy the composition of the word, in a wholly new way, providing the viewer with multiple levels of engagement with the work of art. 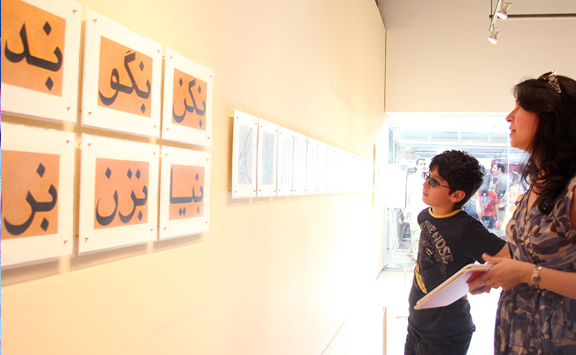 Contemporary use of calligraphy by Iranian artists

Many Iranian artists find inspiration in the traditional forms of Persian Calligraphy. However, few are able to successfully marry the traditional forms of calligraphy with a contemporary voice in new and successful ways. One of these artists is Gita Hashemi, whose recent project “The Book of Illuminations” is featured in “The Third Space” exhibition. In this work Hashemi explores the intersection between politics and the personal through calligraphic representations of culturally charged words. Her calligraphy paintings do not merely render poetic verses, but aim to unpack the meaning behind words that we use on a daily basis to symbolically question cultural in-tolerances. One example uses the word “غربتی” which is a derogatory term that comes from the root word “غربت” and means the longing for one’s homeland. But used as an offensive term, it takes on a new meaning and refers to that person as someone who does not belong, and does not fit into the norm. These terms shown here in proximity to the personal narration of the artist’s life writing speak to the expectations placed on us and the limitations of societal benchmarks. Hashemi’s The Book of Illuminations is a fresh approach to the long tradition of calligraphy from Iran and uses a feminist perspective to challenge this traditionally male-dominated, decorative practice by inserting the political into the equation. 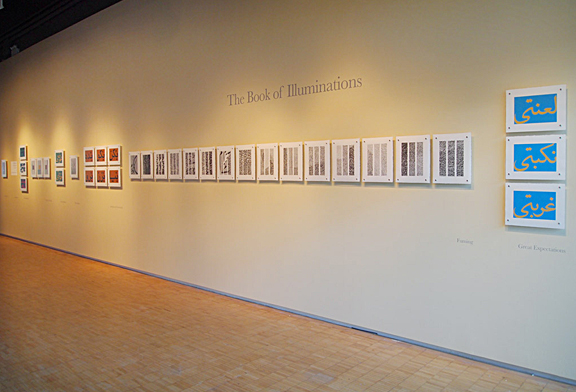 In another project, Toronto based artist, Sona Safaei, uses the Farsi and English alphabet and essay writing styles  to uncover the differences in the two languages, which intern demonstrate alternative ways of thinking through a subject. Her process often engages with lost meanings in translations, as she questions the possibility of communications across cultures through looking at the self and the feelings associated with otherness. In The Third Space exhibition, Safaei-Sooreh two works respond to the meeting of two languages (English and Farsi). In Alphabet, the viewer finds herself in front of a split screen video as the camera tracks two alphabets being hand written in pencil – one in English, from left to right, and the other in Farsi, from right to left. A dense and textured sound enhances the experience of watching each gesture. The sounds from the left and right videos combine in a seamless collaboration. An amalgamation occurs precisely at the moment when the video loop comes to a close and both sets of alphabets have been written out tin their entirety. This charming momentary union marks an important occurrence, as the English alphabet includes 26 letters and the Persian alphabet 32, this serendipitous synchronicity signals a potential for cohesion of these two cultures. Safaei-Sooreh’s second work titled, Border is a dual channel video installation in which two sets of texts on the subject of art intersect at the corner of a room. The writing disappears on the borderline where adjacent walls meet, creating a unique experience for the viewer, as the piece examines the duality of experiences always at play in transcultural situations. 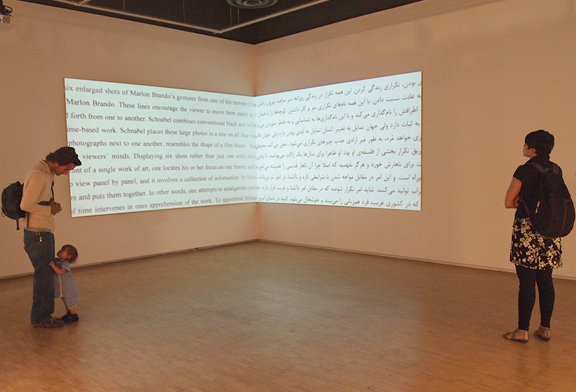 CLOSING TOMORROW SUNDAY SEPT 15!
The Third Space is on at the Harbourfront Centre’s York Quay Gallery.

All above images courtesy of curator Sanaz Mazinani’s.