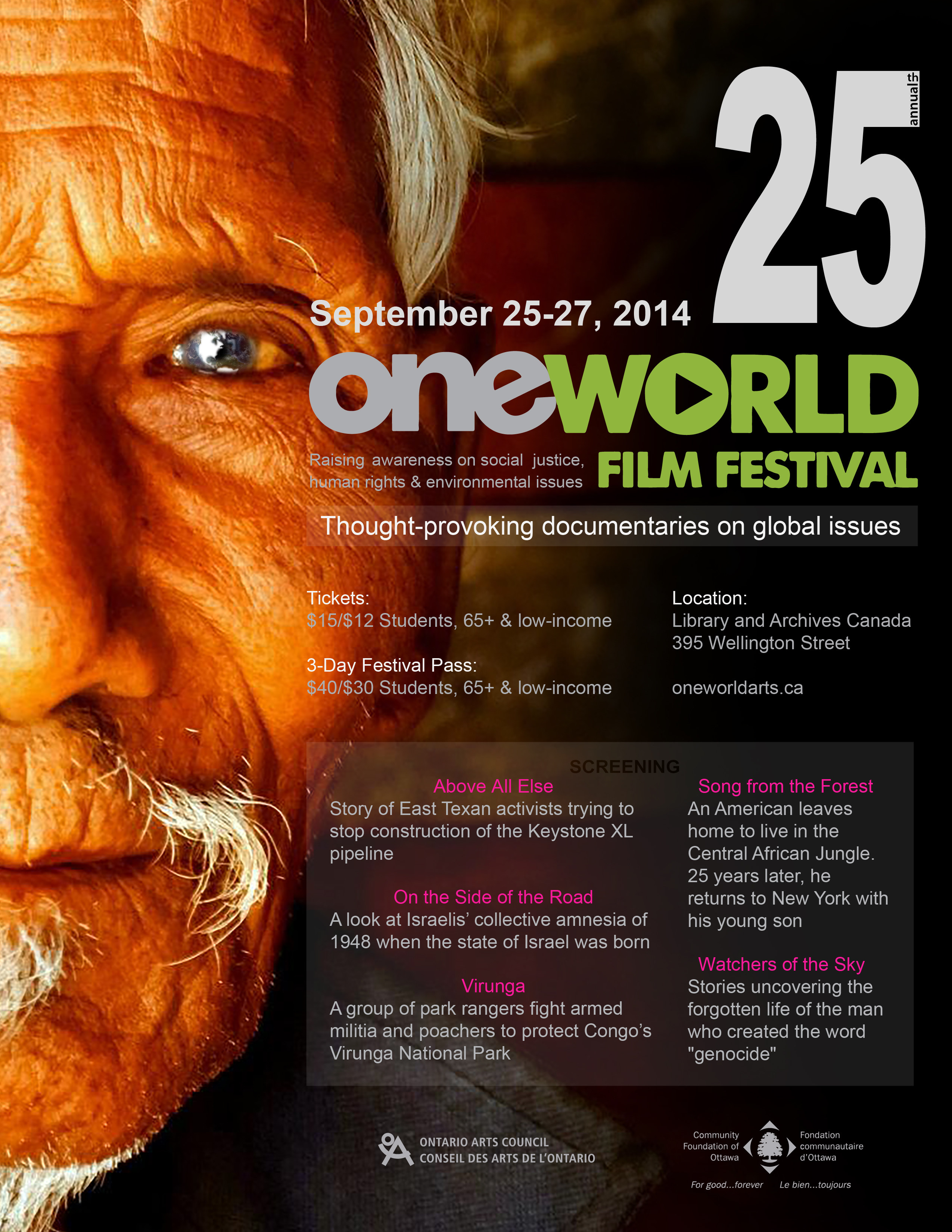 One World Film Festival opens at the Library & Archives this weekend in Ottawa.

This weekend whether you are in the Capital of Ontario or the Capital of Canada, both cities are hosting independent film festivals with programming that offers critique to current issues, like Oil and Occupation as well as Occupation because of Oil.

In Ottawa the One World Film Festival is in it’s 25th year. It runs from Thursday September 25th to Saturday, September 27th.

“an intimate portrait of a group of landowners and activists in East Texas who tried to stop construction of the Keystone XL pipeline, a $7 billion dollar project slated to carry tar sands oil from Canada to refineries on the Texas Gulf Coast. They risk financial ruin, personal safety, and the security of their families as they attempt to protect their land and defend their rights. The film is both an exploration of the human spirit and a window into how social change happens in America.” More info…

“Africa’s oldest national park, Virunga is a UNESCO world heritage site, and the last natural habitat for the endangered mountain gorilla. None of that will stop the business interests and rebel insurgencies lurking at the park’s doorstep. Orlando von Einsiedel pairs gorgeous natural scenes from Virunga with riveting footage of the Congolese crisis, raising an ardent call for conservation as a vital human enterprise. Along the way, he spotlights the incredibly dangerous work that is often required to safeguard the environment.” More info…

“WATCHERS OF THE SKY interweaves four stories of remarkable courage, compassion, and determination, while setting out to uncover the forgotten life of Raphael Lemkin – the man who created the word “genocide,” and believed the law could protect the world from mass atrocities. Inspired by Samantha Power’s Pulitzer Prize-winning book, A Problem From Hell, WATCHERS OF THE SKY takes you on a provocative journey from Nuremberg to The Hague, from Bosnia to Darfur, from criminality to justice, and from apathy to action.” More info…

“Former West Bank settler Lia Tarachansky looks at Israelis’ collective amnesia of the fateful events of 1948 when the state of Israel was born and most of the Palestinians became refugees. She follows the transformation of Israeli veterans trying uncover their denial of the war that changed the region forever. Tarachansky then turns the camera on herself and travels back to her settlement where that historical erasure gave birth to a new generation, blind and isolated from its surroundings. Attempting to shed a light on the country’s biggest taboo, she is met with outrage and violence.” More info…

The Toronto Palestinian Film Festival opens this Saturday in Toronto.

The Toronto Palestinian Film Festival (TPFF) runs from Saturday, September 27th to Friday, October 3rd (so in theory, you could attend both!)

Sunday includes a screening of Omar, one of my favourite movies of 2013. Along with dramas and shorts by Palestinian filmmakers, the festival also includes films about Palestine from the perspective of non-Palestinians. One example is Village Under the Forest.

“The Village Under the Forest explores the hidden remains of the destroyed Palestinian village of Lubya, which lies under South Africa Forest. During the 1948 Nabka, more than 500 Palestinian villages were destroyed. The Jewish National Fund raised money from around the world under the guise of ‘greening the desert’ and built forests and parks named after different countries on the remains of these villages in an attempt to erase their dark history. Writer/narrator Heidi Grunebaum revisits South Africa Forest, the forest she helped finance with the pennies she collected as a child twenty year ago. Using the forest and the ruins of Lubya as representative of a much wider process, this compelling film explores central themes of the Nakba – forced exile, erasure of memory, creating ‘facts on the ground’, and the Palestinian Right of Return.” More info…

“Making its debut at TIFF 2013, Giraffada is a light-hearted drama inspired by a true story. Ziad, a ten-year-old boy from the West Bank, spends all his free time at the Qalqilya zoo where his father Yacine (Saleh Bakri) works as the zoo’s veterinarian. In particular, Ziad has a special bond with the zoo’s two giraffes who he helps care for. Yacine, recently widowed, is determined to preserve the zoo as a haven for animals and for the local children who play there, temporarily escaping the hardships under occupation. One night, after an air strike on the city, one of Ziad’s beloved giraffes dies. The surviving giraffe stops eating due to the loss of her mate. Yacine is determined to save her by bringing in a new giraffe but the only zoo that can help him is in Tel Aviv. Yacine and Ziad are committed to doing whatever it takes to save their giraffe, even if it means breaking the law. Giraffada, which stars Mohammad Bakri (In Attendance), is a unique portrayal of childhood under occupation.”

“Cinema Palestine is a poetic documentary which explores the life and work of multiple generations of Palestinian filmmakers and media artists. Based on in-depth interviews with a wide range of Palestinian artists living in the Middle East, as well as North American and Europe, the film documents the emergence of a Palestinian narrative through film, the relevance of film to the Palestinian national struggle and the relationship between art, personal experience and politics in one of the most contested landscapes in the world. The film features interviews with numerous filmmakers screened at TPFF including: Annemarie Jacir, Rashid Masharawi, Mohammad Bakri, Najwa Najjar, Hany Abu-Asad, Nasri Hajjaj and Mai Masri. A post-Screening Panel featuring Tim Schwab, Mohammad Bakri and Mais Darwazah will follow the film, with our guests further exploring the role of Palestinian cinema in the emergence of the Palestinian narrative.”

Screenings for the TPFF take place at TIFF and the AGO’s Jackman Hall. For full schedule details click here. 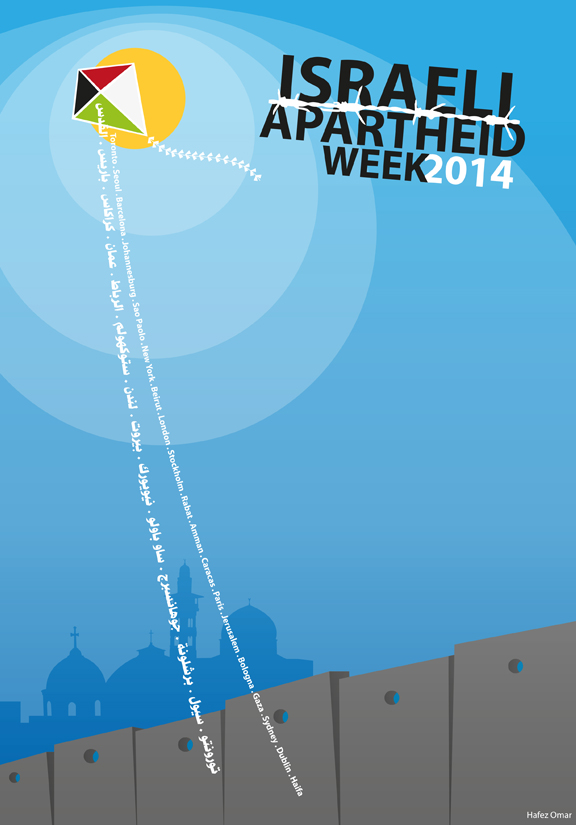 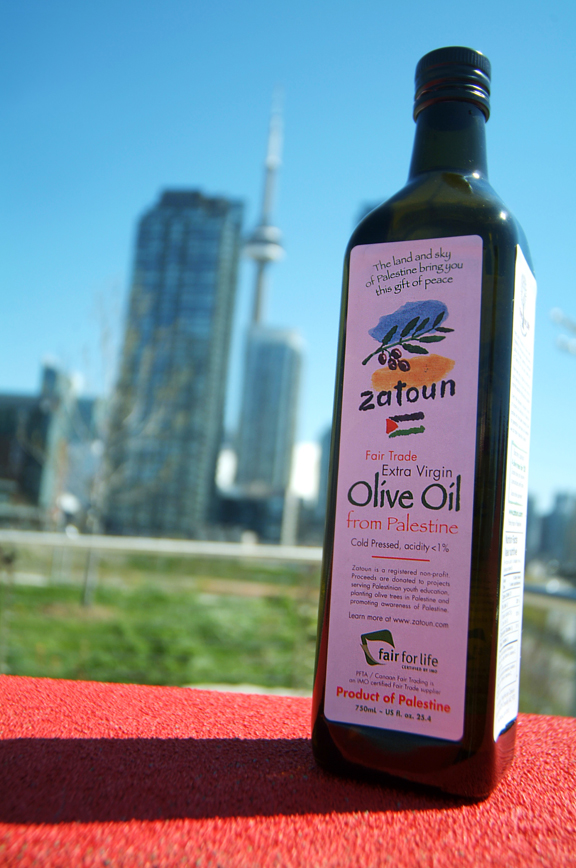