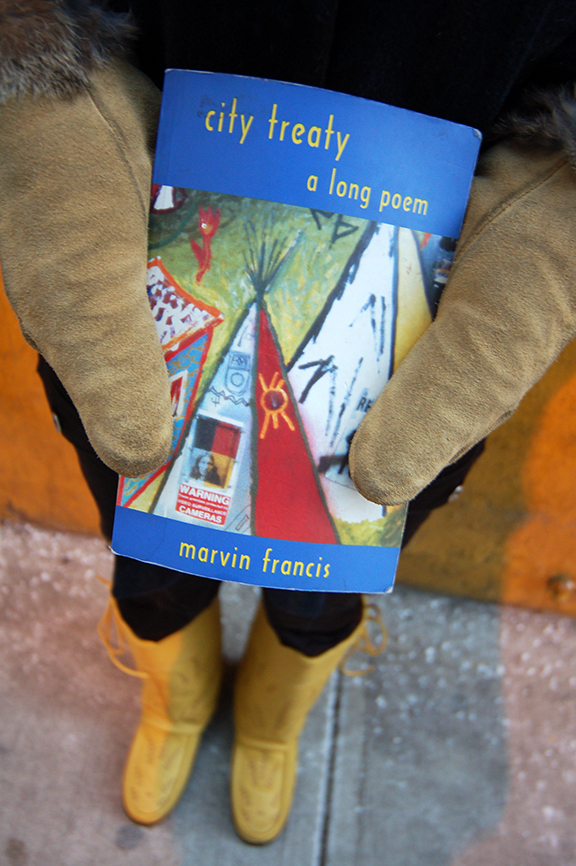 What’s in a name.

Looking at the typography of a city through an Indigenous lens can fracture what we think we know. Chorography is the act of “describing or mapping a region.” The chorography of our cities effectively maps multiculturalism but underneath the Little Italys and Chinatowns original place markers have been trampled under the foot of many a newcomer.

Recent headlines have pointed to Winnipeg as being one of the most racist cities in Canada. For the urban Indigenous population in Winnipeg the city, whose name is derived from the Cree word win-nipi, is marked with anxiety. Marvin Francis was a playwright, author, visual artist and poet from Heart Lake First Nation and his experience of living on the “Urban Rez,” as he referred to Winnipeg, formed itself into a book titled City Treaty: a long Poem.

and finds
the way
to finance
this project 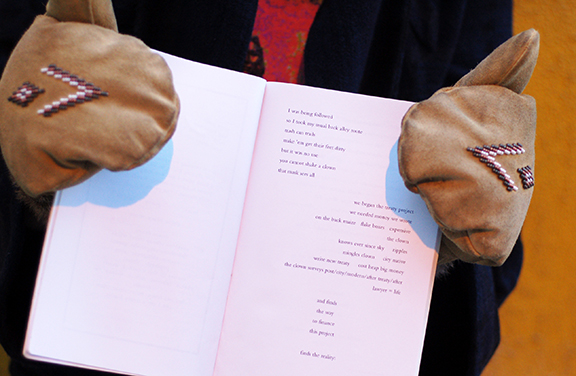 As a teenager, moving off his reserve to the city, Marvin developed a complex relationship with Winnipeg.

“The urban Aboriginal experience is dependent upon the circumstances of the individual, and speaking in general terms is always dangerous, but I think it is a fair statement that, for the average Native who comes from the Rez, the city contains a spectrum that ranges from new possibilities to that social monster, crack.” Read more…

It’s hard to know where you are standing when the original place markers become impossible to find. But they are still there for those who are tenacious enough to search. Sometimes names hint at the stories that lay just below the surface of maps made for our ‘modern’ times.

Where the trees are standing in the water, the beautiful lake

Counter-mapping is a term used to refer to the intentional use of mapping methodology and technology such as GIS, cartography and geomatics to make visible how dominant power systems have used maps as a way to assert control over territories often for the purpose of resource extraction and/or settlement.

In Canada, oral histories are now considered an important part of counter-mapping and testimonies of the historical use of that land by Indigenous populations becomes a way of providing evidence at land claims. (Read more about this in Maps and Memes: Redrawing Culture, Place, and Identity in Indigenous Communities)

Beyond the legal applications counter-mapping combined with visual ways of expressing space are being used by artists as a way of marking places with counter-narratives. 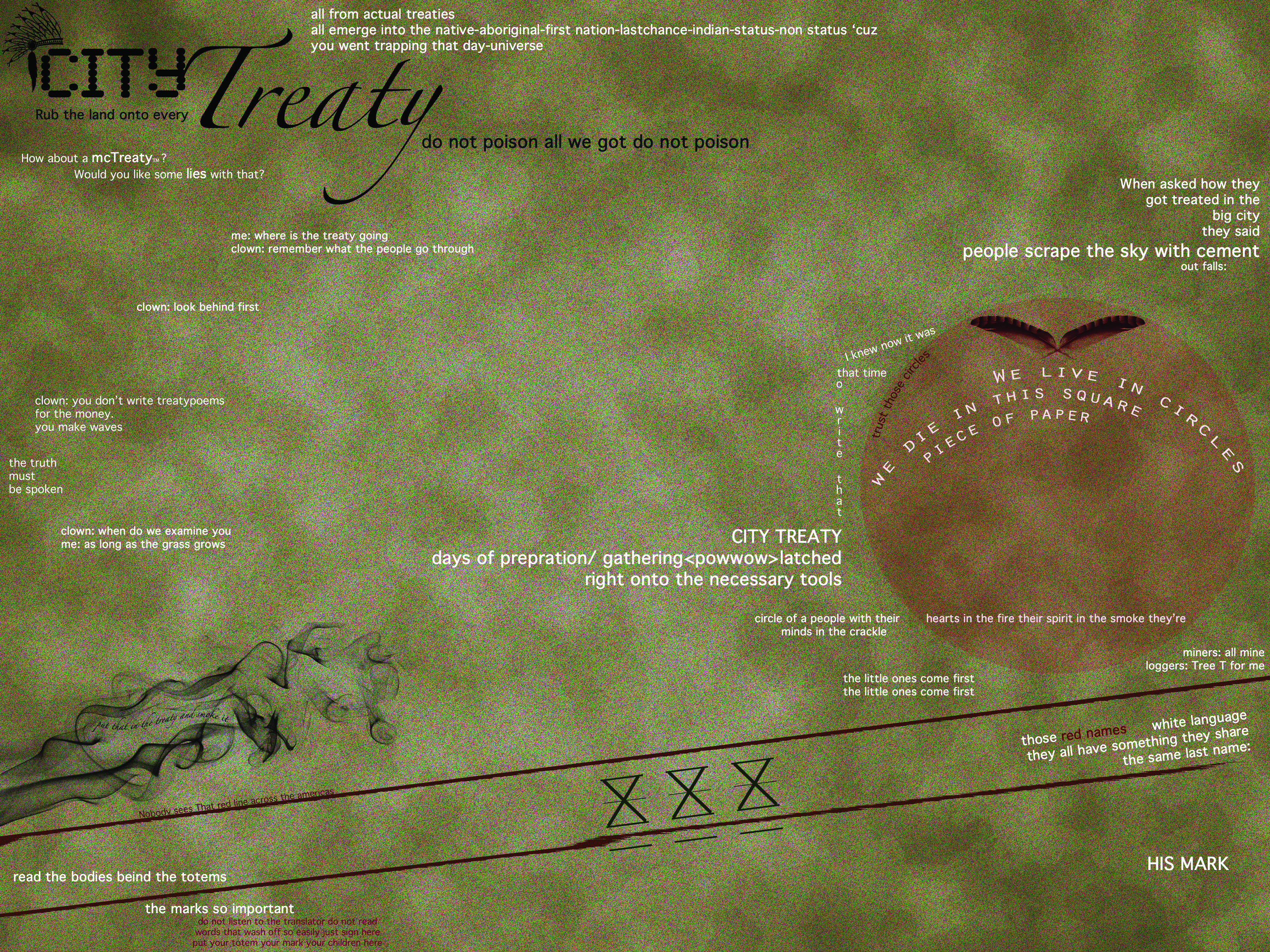 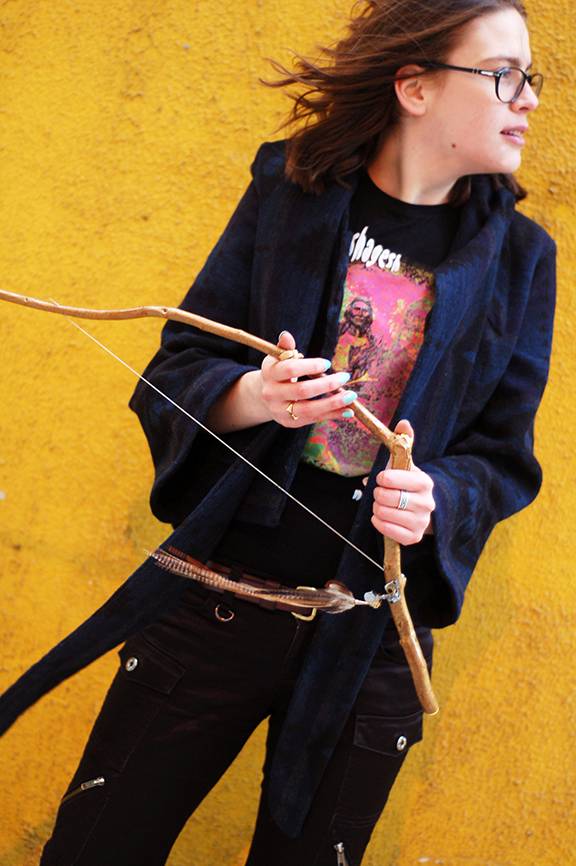 Sarah Yankoo “is Algonquin, Irish, Hungarian, Romanian and Scottish and edge walks between the bush and the city that gathers in Toronto.” While in York University‘s Environmental Studies program she discovered the poetry of Marvin Francis in a class titled Indigenous Literature, Survival and Sovereignty and for her, the earth moved. Her response was to become one of the tenacious ones who seeks to uncover what some have tried to make us forget. Her photographic work is about creating an image bank demonstrating that in urban spaces a counter-mapping movement is taking place – graffiti tagging, arts activism, and even random formations seem to be giving us a message.

In underpasses, subway stairs and skyscrapers Sarah finds markers that signify we may be at the moment before a seismic shift is about to go down. The ‘Urban Rez’, as Indigenous populations explode, can become a place of renewal and a city, like Toronto / Tkaronto is capable of flexing intuitively – as though it remembers. The shape of the map may not be changing, but the rigid borders of colonial mindsets shift to create a dynamic that will forever change the emotional contours of a city. 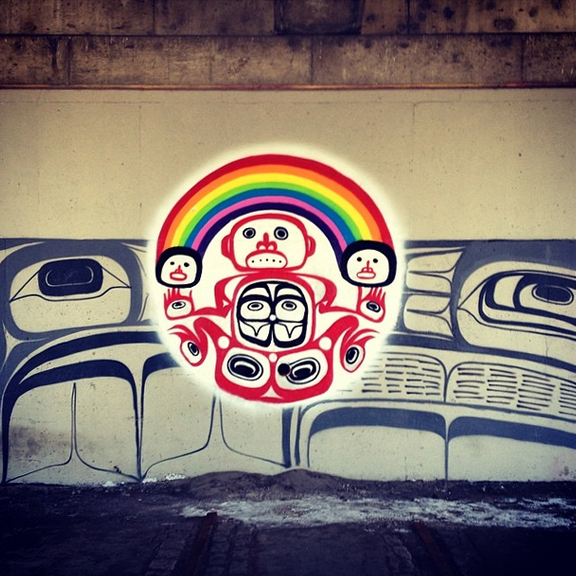 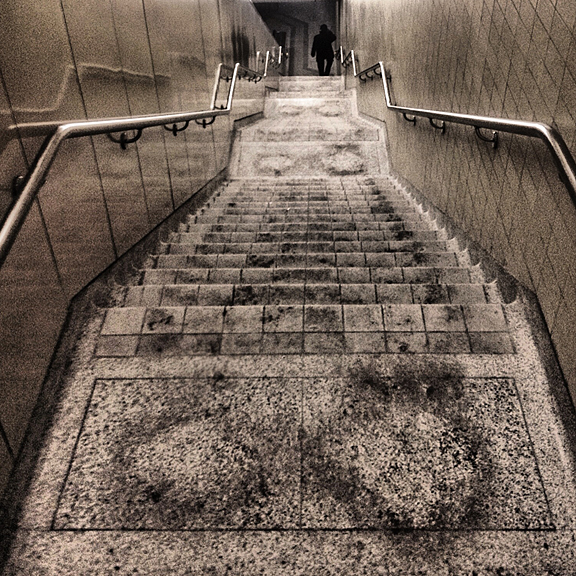 Sarah has also found a way to continue the work that Marvin started by “writing her own treaty poems while exploring the piece [City Treaty] as an installation work and political engagement piece.” For the University of British Columbia’s exhibit Claiming Space: Voices of Aboriginal Youth at the Museum of Anthropology she contributed City Treaty Manuscript. (view City Treaty Manuscript image above)

“Claiming Space: Voices of Urban Aboriginal Youth looks at the diverse ways urban Aboriginal youth are asserting their identity and affirming their relationship to both urban spaces and ancestral territories.” Read more… Kimiwan was started by Joi T. Arcand and Mika Lafond in summer of 2012.” 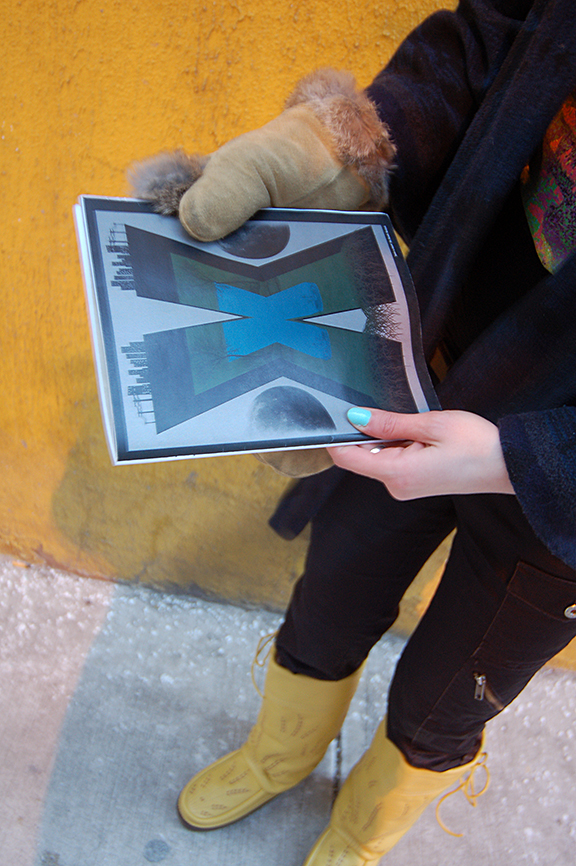 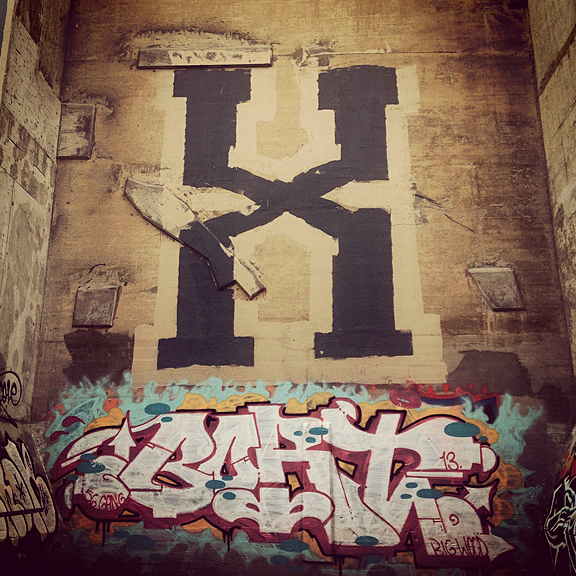 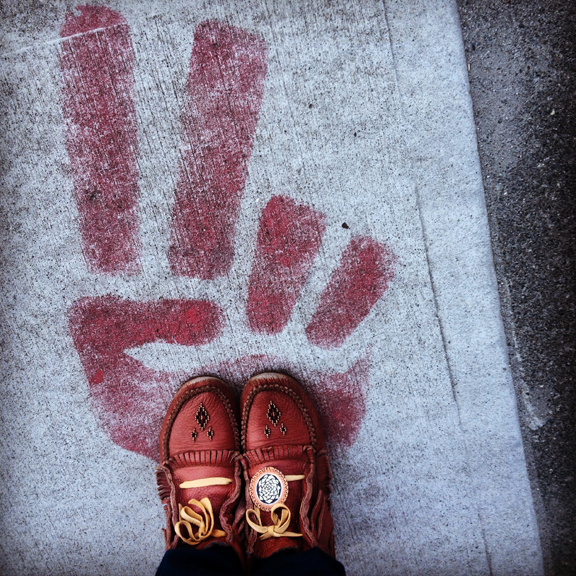 The Revolution will be Indigenized.

Marvin, who passed away in 2005, wrote of Toronto:

“Winnipeg, with its high Aboriginal population, is one place where you can walk downtown and meet other Aboriginals. Regina is like that, too, but a city like Calgary or Toronto has few Aboriginals visible downtown.”

In Toronto First Nations, Métis or Inuit populations can become invisible, absorbed into the multicultural mix but as the city becomes more inquisitive about Indigenous histories and contemporary realities after the earth moved during Idle No More, the Toronto of Marvin’s recollection is rapidly changing. A growing Indigenous presence comprised of artists, activists and academics is drafting a new city treaty with their work. This isn’t just taking place behind the institutional walls of universities and museums – their work spills out into the streets. During the summer of 2013 Ryerson professor Hayden King (Anishinaabe from Beausoleil First Nation on Gchimnissing) along with artist and educator Susan Blight (Anishinaabe from Couchiching First Nation) embarked on an intervention under the name Ogimaa Mikana (Leader’s Trail in Anishinaabemewin). In different locations in downtown Toronto street signs and memorial plaques were subtly counter-mapped by placing Indigenous names and text over the ones put in place by the operating Governments of Canada. Spadina was changed to Ishpadinaa and a plaque was covered at Queen’s Park with the words:

Toronto (Place where the logs flow)

We all live on Native Territory
Our Anishinaabe Land
Welcome to our Community
How do your recognize it? Above images of Ogimaa Mikana Project from www.ogimaamikana.tumblr.com.

With round dances taking place inside shopping malls and pow wows outside on University campuses even the rhythm of the city has changed.

Sarah also uses music as a way to infuse urban streets with Indigenous vibrations. She makes mouth bows out of branches she searches for when out in the bush. Inspired by the music of Buffy Sainte-Marie as well as A Tribe Called Red she also performs and is often remixing the recordings of her mouth bow on her iPad. 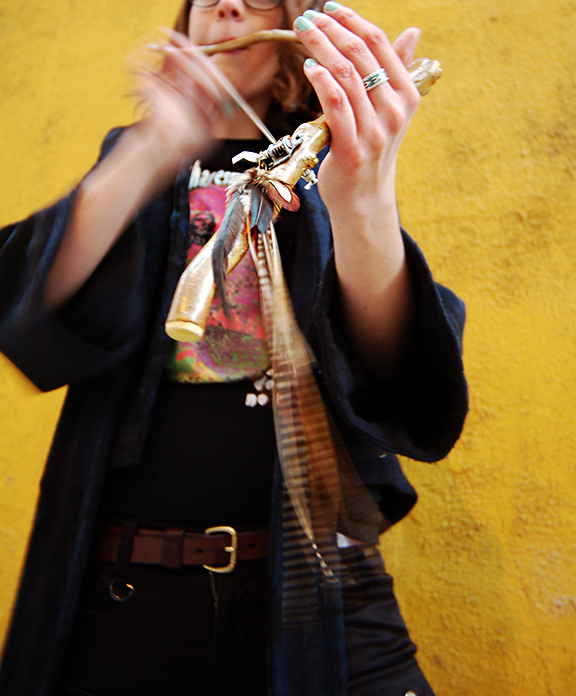 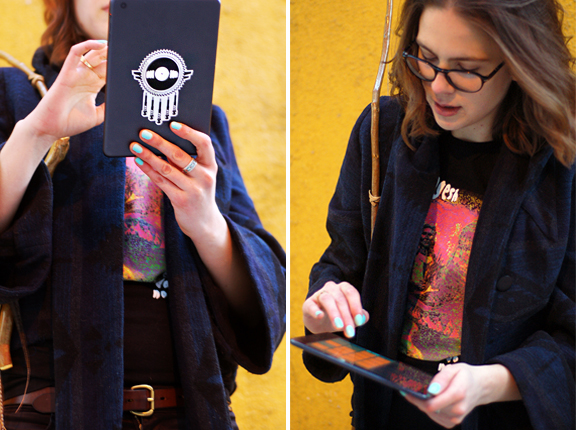 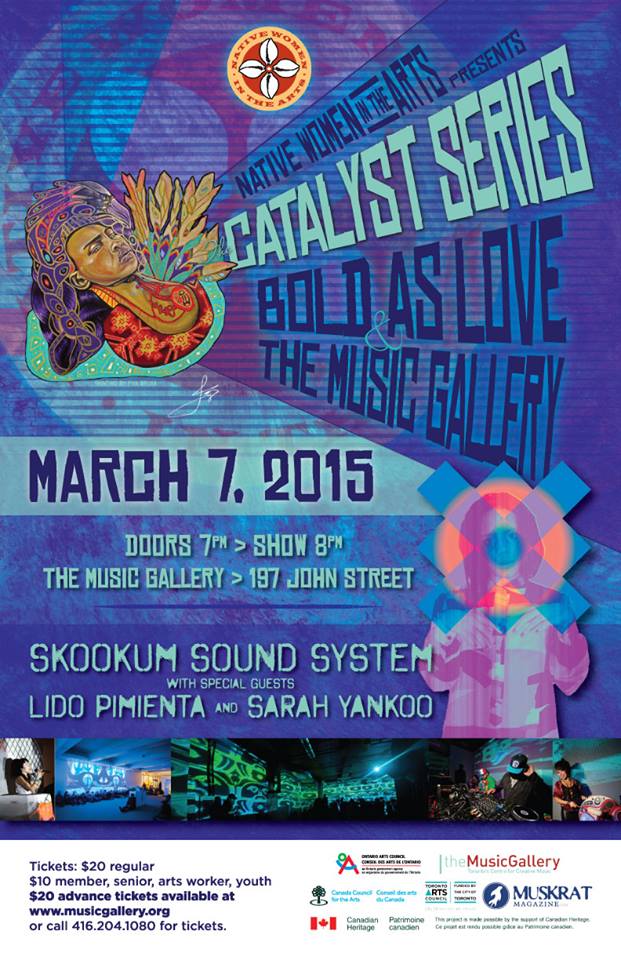 This coming Saturday she will performing alongside Skookum Sound System for Native Women in the Arts Catalyst Series hosted with the BOLD As Love Collective at the Musical Gallery, Toronto. Collectives like BOLD As Love, with their spoken word and musical performances, showcase the plurality of Indigenous voices fleshing out a deeper meaning of diversity.

Counter-mapping and marking alternate meanings into the urban space becomes a therapeutic act. Time to dig down into the bedrock to excavate those solutions. 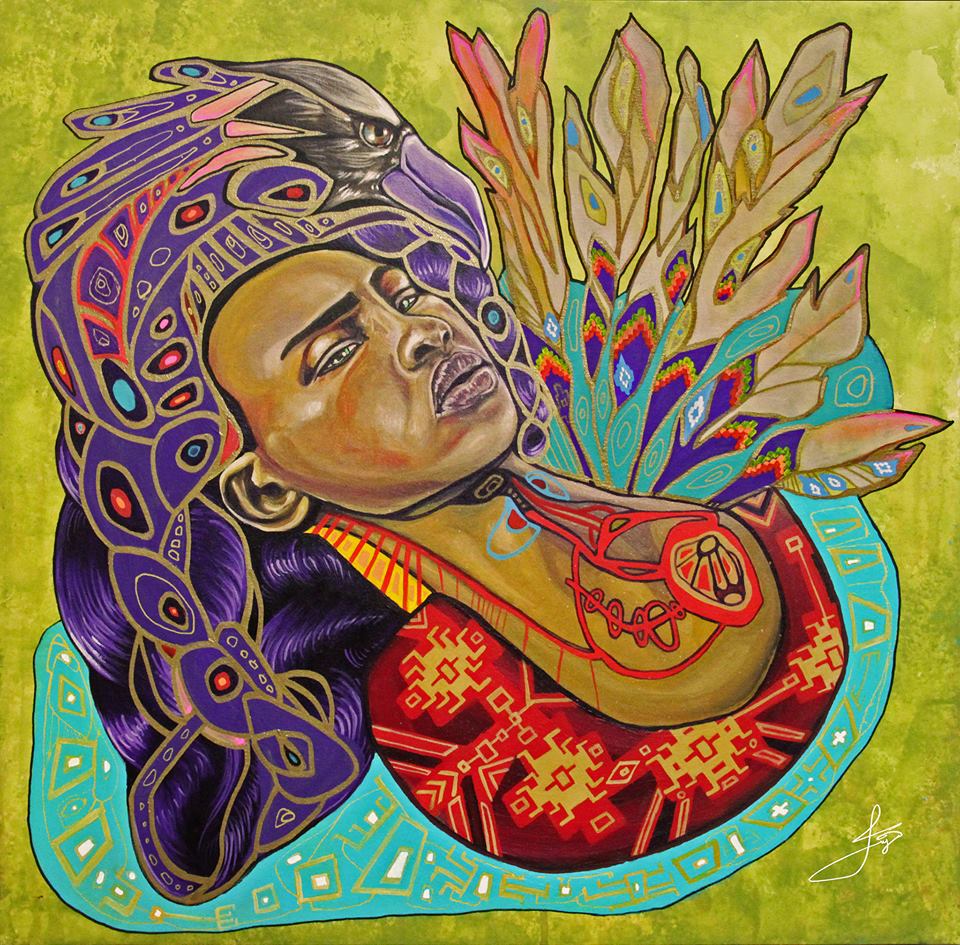 Read more about BOLD As Love in Now Magazine.

So pull your thoughts of others from history into today

And we all emerge from

To those treaties smouldering and collecting our dust

To loop the difference in times zoned

Flash present to a disguise that fools nobody’s god

To the territory as large as the land itself
Reach the borders and the sounds that fit the land contours
And while the rivers wash from the inside and the prairie undulates from the Canadian
Shield up one side of the Rockies and down the Mackenzie. Remember there is no
linear in the bush, and the city only thinks it does. so you can finally figure out that the
land is owned only by our children and never by us

Then do it again

For you must remember what the people went through 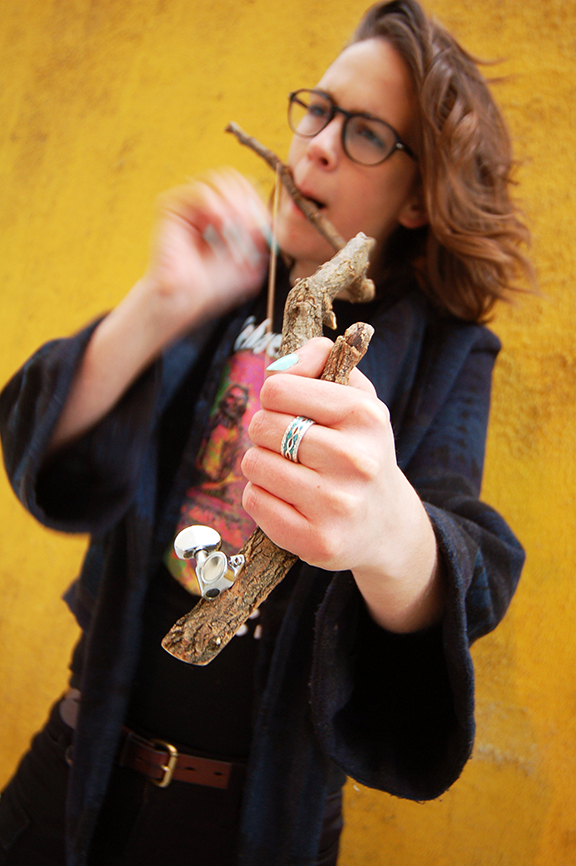 Above images of Sarah Yankoo by Leah Snyder for Mixed Bag Mag.

EDITOR’S NOTE: Sarah is rocking a jacket by Toronto based Dene designer Sage Paul and boots by Métis owned company Manitobah Mukluks. You can support Indigenous designers by signing a petition against DSquared’s #DSquaw collection from Milan Fashion Week at Change.org. The petition asks that Dan and Dean Caten apologize for their actions and as Canadians donate the profits from their collection to an organization that supports the rights of Indigenous women here in Canada. Click here to sign.