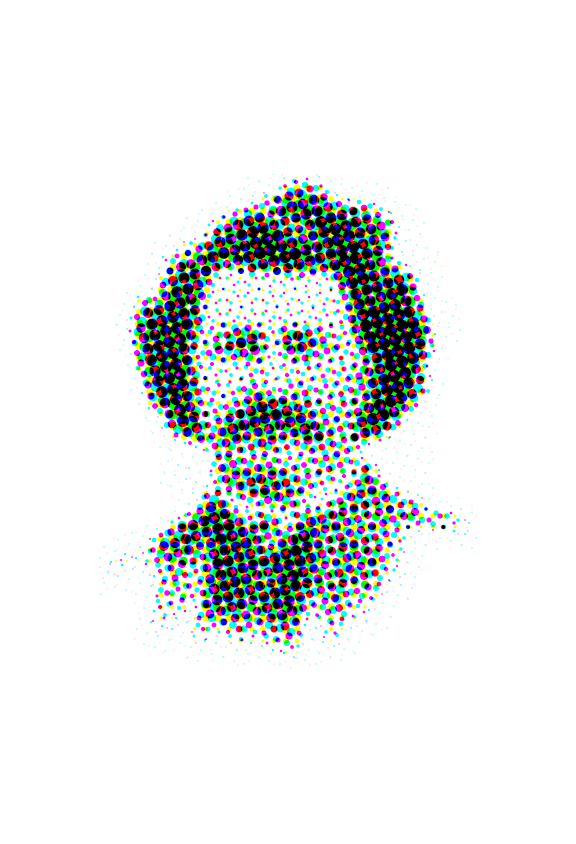 Honouring the spirit of Louis Riel and cultural resiliency.

Today, Manitobans are celebrating Louis Riel Day in remembrance of Riel’s political and social impact for the province of Manitoba. “Louis Riel was the driving force behind Manitoba becoming Canada’s fifth province. His dream of a province that embraces all cultures is still shared by Manitobans today.” (sited from Government of Manitoba’s website)

But Riel’s impact was larger than the locality of the battles fought in the late 1800s and his vision is  still relevant in contemporary times. As a leader who fought for the rights and cultural sovereignty of the Métis people Riel has become for many (even non-Métis people) an icon of resistance. He understood the fissures that occur in the dried up riverbeds that lie between culture and geopolitics. Today many are still praying for rain and fighting the same battle.

Riel also believed in the power of artists. He is quoted as saying “My people will sleep for one hundred years, but when they awake, it will be the artists who give them their spirit back.”

In this spirit MIXED BAG MAG celebrates Louis Riel Day with a feature on Cree Métis artist Jason Baerg. Jason’s current show at Urban Shaman in Winnipeg, Manitoba features his work from his series Nomadic Bounce. The work for Nomadic Bounce was produced as part of a residency in Australia RMIT School of Art and is about (re/dis)location. Nomadic Bounce points to the fact that whether we are near or far from ‘home’, it is an ever present concept we return to even when our feelings around home are ambiguous, even tenuous. 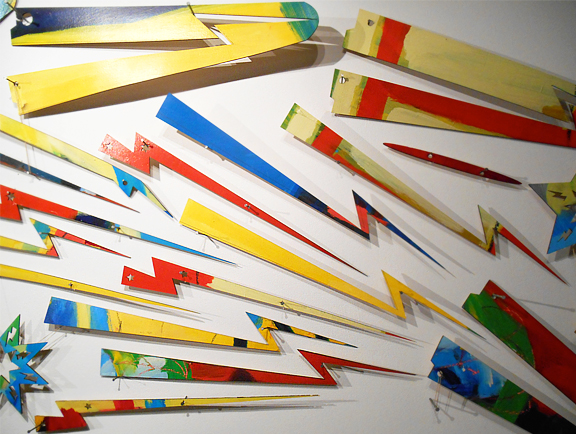 Jason has called many places home. Born in Sarnia, Ontario Jason was young when he moved with his mother and siblings to Prince Albert, Saskatchewan to be closer to his Aboriginal family. As a teenager he ‘bounced’ back to Sarnia, Ontario where he lived with his Mennonite father. Soon after he moved to Kitchener-Waterloo to finish high school. Then there was Montreal for university, Toronto for college and art residencies in New York, Santa Fe and Australia. 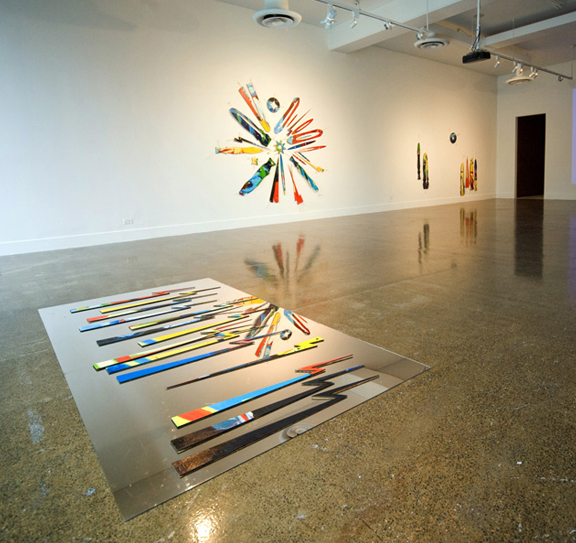 “Home is a headspace”

But like a bird, Jason always circles back to where his migration route began. For Jason home base is located in the power of Indigenous Knowledge, both the spiritual concepts and the potent visuals that speak through the language of symbols. This is what grounds Nomadic Bounce but like much of Jason’s work, with this project, he also chose to take a investigative journey around innovative techniques. 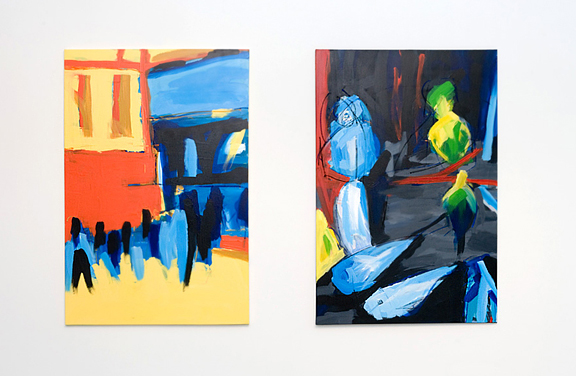 Nomadic Bounce was an exploration into what happens when you take traditional painting then utilize ‘cutting edge’ technologies to intervene and agitate perceptions of what painting / sculpture / installation can be. 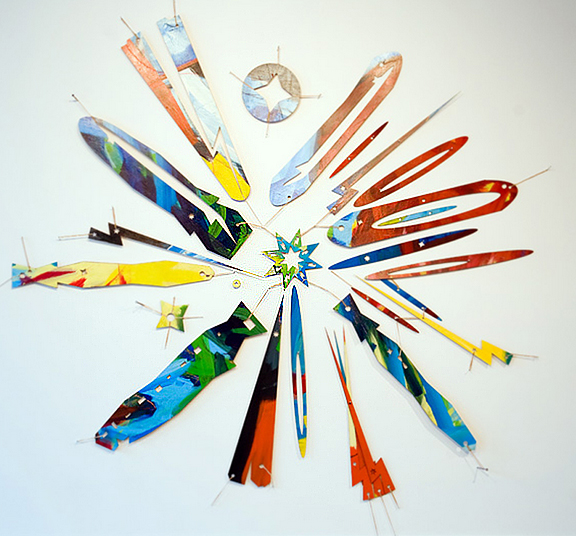 The paintings were based on seven 33 second video clips Jason made of poignant moments he experienced at home / abroad / in transit. Two mirror sets of paintings were created: one set remained as traditional paintings that could be fixed to a wall; the other set was laser cut into shapes and intended to be used for site specific installations. A shape that is ubiquitous in this series is the thunderbolt. Jason explains that he uses the thunderbolt often as it is affirms change but not just any type of change – it is the type of change that is “dramatic, immediate, rapid.” When he brings this symbol into his work it is about shifting energy.

The original intent of the body of work was to re-assemble it each time it changed location as the idea of a journey was the core conceptual premise of the series. In Australia the laser cuts were assembled into mandalas, powerful circles that establish a sacred space and represent the cosmos. Jason imagined that the next manifestation of the work would be something similar but then the work took on a life (or lives) of its own when it disembarked at each new destination.

In Prince Albert the work configured to resemble the cityscape Jason grew up with and the view of the buildings as seen from across the river divide. In Edmonton, as Idle No More gained momentum and the Journey of the Nishiyuu topped the headlines, the pieces were assembled into four jack rabbits that were inspired by the cunning abilities of the trickster when opposing the status quo. 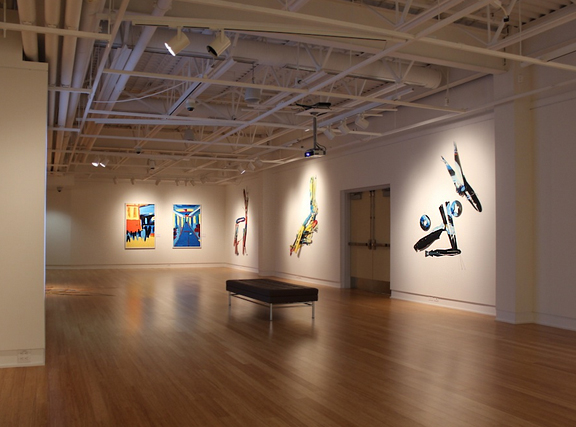 The Battle of Batoche in 1885 was a defeat for the Métis people that led to the surrender and eventual execution of Louis Riel. When Jason’s work arrived at The Mendel Art Gallery in Saskatoon the Battle combined with the impact of the railway on Indigenous people was the spirit that moved the work to configure into an empty train car modeled on the post-modern solar-powered speed trains of Japan. Jason says this form was about “an act of reclamation, giving the power back to the People.” 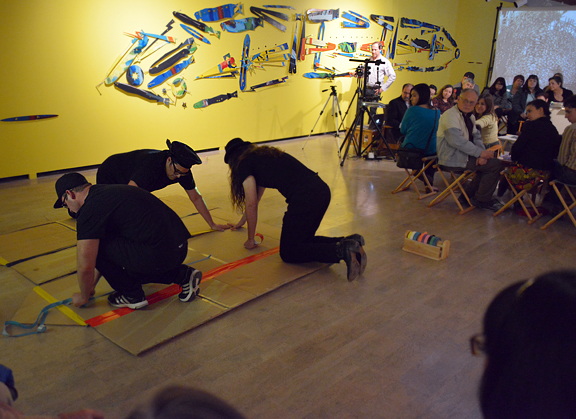 Now at Urban Shaman the work has emerged as two wolves, both in a strong stance, reflecting their gaze upon each other. Jason sees the wolf as an innovator who leaves the pack to find new knowledge that is brought back to fuel resiliency. “The wolf is looking into the future, the past, into the community and at itself, concurrently.”

The beauty is that this series of work that began as a meditation on home has become fluid, adaptable to place and flexible – changing shape without compromising the original sum of its parts.

FYI – Jason’s show RETURNING closes this weekend at Urban Shaman so if you are in the Winnipeg area this would be a great show to check out! 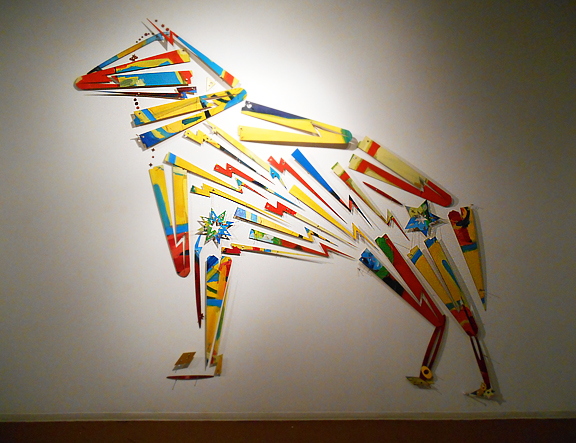 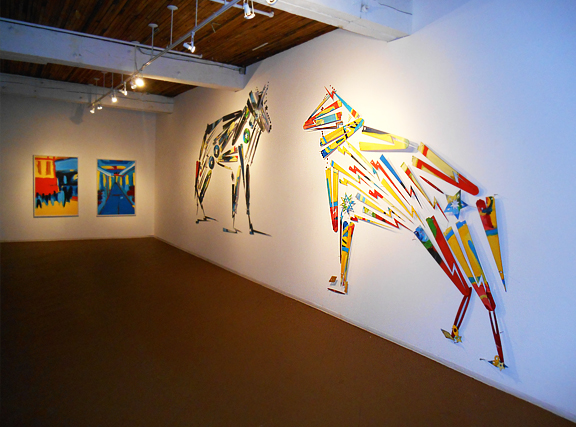 Above images of Nomadic Bounce at Urban Shaman, Winnipeg. Images provided by the artist.