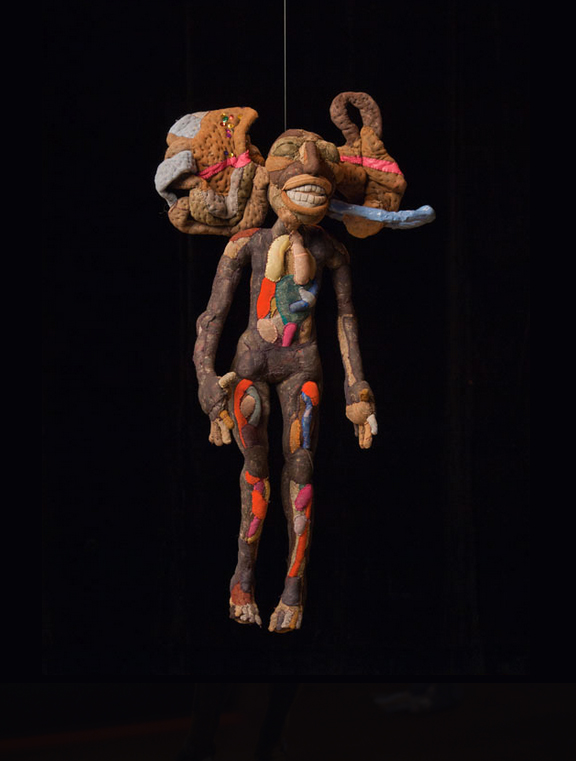 I had two different experiences of Jérôme Havre’s work.

Images taken of a past exhibit showed a presentation that was unique in the way it utilized almost the entire square footage it occupied within the gallery space. A pattern in black and white had been painted onto the wall, wrapping the room and melting onto a grayed floor. I didn’t know what the pattern represented but I knew I loved it. The repetition was calming and invigorating at the same time.

Standing on pedestals (or as I later realized hovering slightly above them suspended from the ceiling) were these beautiful beings that you could tell had been handcrafted with colourful textiles that added more pattern to delight the eye. They were fashioned with lumps and bumps but also with feet so I got the sense that some hybrid being had emerged from the artist’s imagination.

Nothing immediately came to mind to compare them to but the entire effect of the patterned wall, free floating sculptures and pedestals that felt more like architectural remnants made for maximum impact!

I was excited to see the show at the Textile Museum so that I could get a sense of it all – up close and personal. 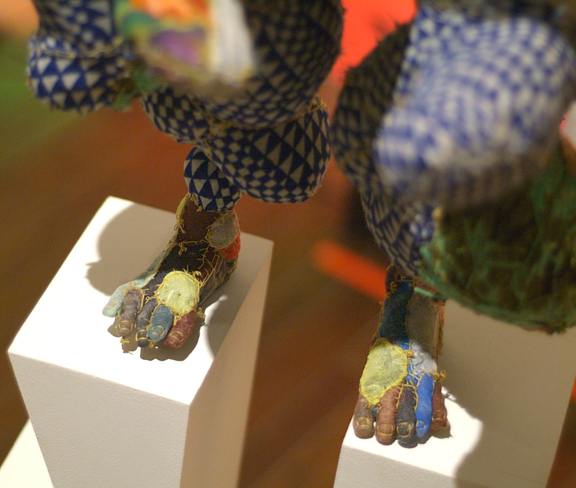 What I was looking forward to the most in seeing Jérôme’s work in the flesh was the experience of being enveloped by the install. I admire artists who know how to create an environment that makes me feel as though I am walking into a very different kind of space, one that catches me off guard – disarming me a little or provoking me a lot. 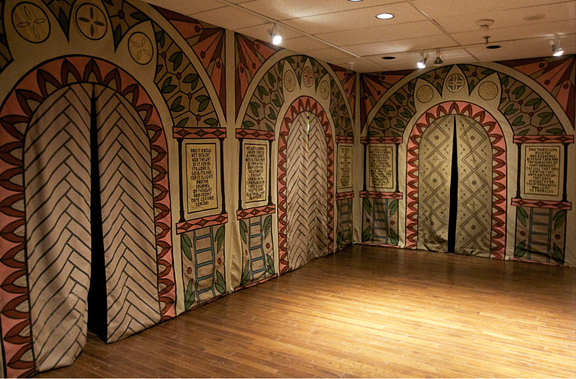 Fictions and Legends, that also includes the meticulous and stunning work of Heather Goodchild, did not disappoint! Immediately upon entering the exhibit you know you have walked into a show that is going to be a very different experience than one would expect at the Textile Museum or any other gallery for that matter.

The first room I walked into was wrapped with fabric on which Heather had painted symbols that felt religious and words that felt sacred. Thick curtains closed off secret spaces. Once inside those spaces I was met with rug hookings that seemed antique in their technique but the scenes depicted didn’t match the pastoral compositions you would expect. They felt foreboding – almost apocalyptic. The scene on the last rug before the entrance to Jérôme’s space made me particularly uncomfortable but I will come back to that. 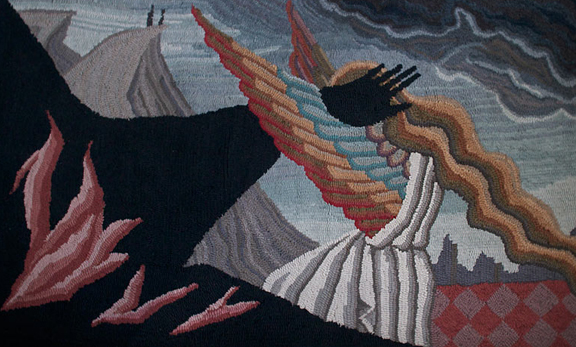 Heather Goodchild, Get Behind Me. Image from the Textile Museum.

I then stepped into the space that Jérôme had constructed. This room was devoid of the curtains that acted as barriers in Heather’s install. In fact, just like the images I saw online, everything was installed without obstructions. 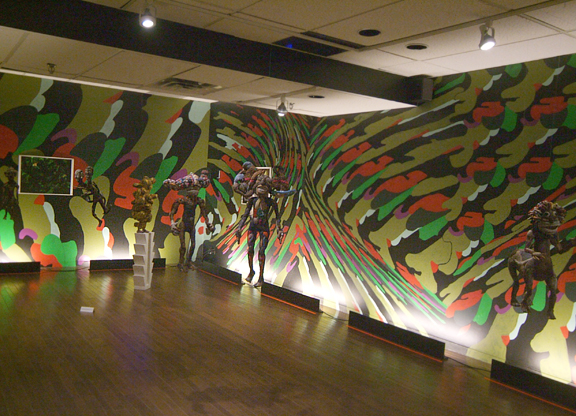 I had yet to see all of Heather’s work so I left Jérôme’s area to enter into the final scenes she had created. This time, instead of textiles on the walls, porcelain figurines, bigger than dolls but smaller than life-size, were configured into scenes that read as vaguely Biblical, some sort of moral tale was being told even if I couldn’t call up an immediate reference as to who and what. The scenes, much like the rug hooking on the walls, were haunting. Some of the female figurines seemed to be committing dirty deeds done dirt cheap. As I overheard one person say Heather’s work contained “creatures we don’t understand and stories we don’t want to tell.” 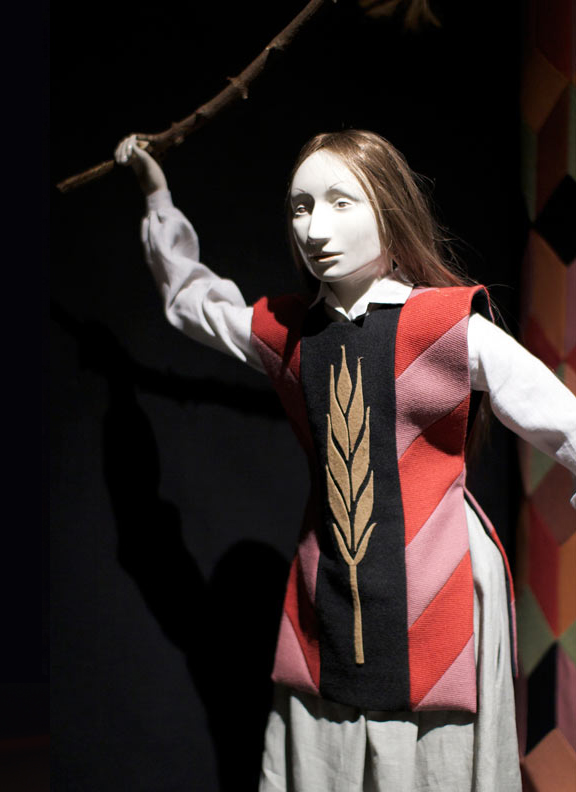 In all of the scenes Heather constructed there was an implied demarcation where the viewer was to stand, like an impotent witness.

Heather’s work was cloistered, staged and secretive; precious and breakable therefore untouchable. Her figures were stark white and clearly female with contrived faces with unbroken expressions; poses that were rigid and fixed.

When juxtaposed with Jérôme’s work I couldn’t help but feel that the two installs where pushing off each other with an intense force – in binary opposition.

For everything Heather’s work was Jérôme’s was not – out in the open and close enough to touch; made of fabric that was flexible enough to withstand impact. The hybrid beings referenced ‘blackness’ and their bricolage bodies were stitched together from fragments of nylon and cotton leftovers making them uneven and soft, although sturdy. They each hung suspended, turning slowly to animate the space. In Heather’s install there was silence. In  Jérôme’s the sound of wild birds.

I didn’t recall, from my reading of the exhibit prior to entering, that it was meant to be an exhibit speaking on the subject of race but in this space, the realities of race seemed inescapable. 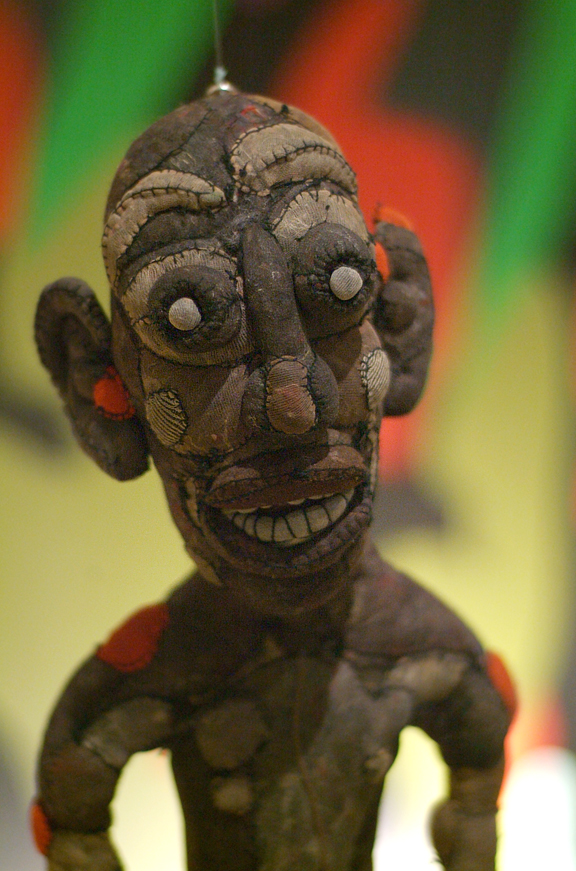 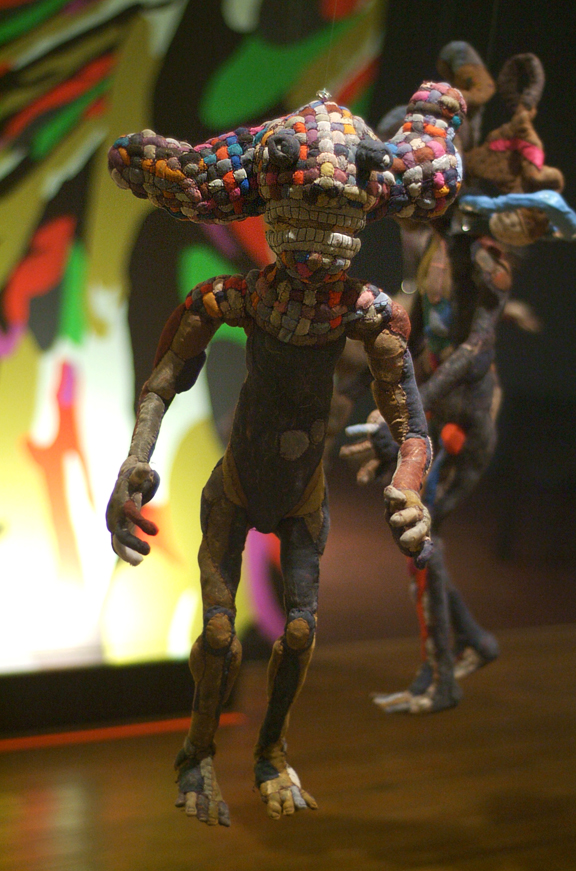 I returned many times trying to reach back to that first moment when I saw Jérôme’s work and had read it so differently.

My experience provoked me and I needed to get to the bottom of it. When I attended a LUFF Art + Dialogue’s Open Sesame Event discussing the Fictions & Legends show I entered into a room full of knowledgeable art professionals but it was a predominately white space. Jérôme was in attendance. Would he would let the cat out of the bag that the artist was present? Even if he didn’t it, the obvious elephant in the room was the fact that he was the one black male in a group of mostly white bodies. How would this fact impact the discussion?

Just prior to seeing Jérôme’s work I had attended the Vodou Exhibit at the Canadian Museum of Civilzation. In an effort to works towards better understanding of their spiritual practice, hopefully resulting in new found respect, members of the Haitian Vodou community in Montreal were involved in the organization of the show. As I walked through the exhibit though I wondered if people would be able to see (feel) past their preconceived notions. We grow up on a steady diet of stereotypes so much so that the unconscious must store those unsettling thoughts, maybe even keeping them under wraps, but they aren’t so buried that they can’t emerge in an unfortunate moment.

And just before the Vodou exhibit  I had visited the National Gallery in Ottawa where part of Carrie Mae Weem’s From Here I Saw What Happened and I Cried was installed on a wall. On the four red tinted ethnographic daguerreotypes of black men and black women are the words:

You become a scientific profile,

In reviewing Jérôme’s work to sit down and write out my thoughts for this post I look again at one of the first images I saw of his work. I see something I hadn’t noticed before. A framed image hanging on the wall that reads:

When will we be just beautiful? 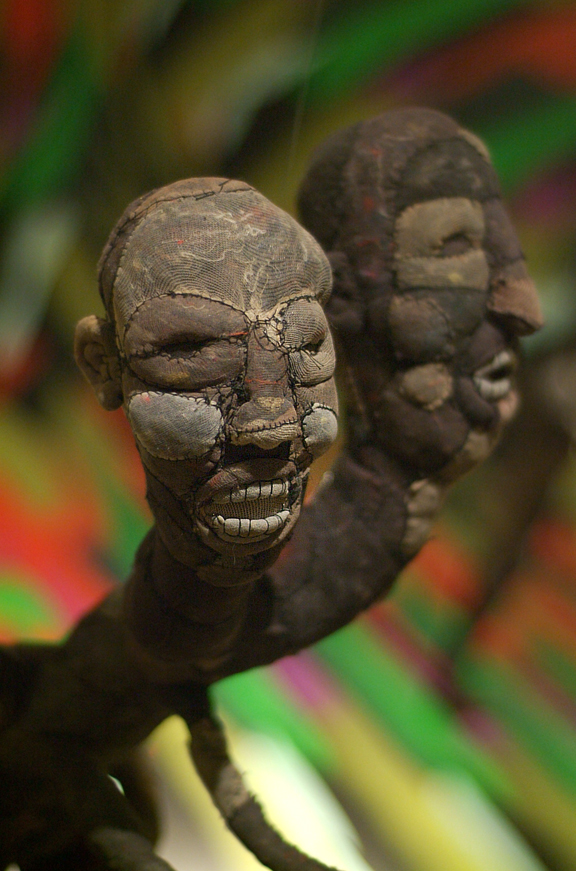 The Fact the lies in Fictions and Legends

In Fictions and Legends, the scene in the rug hooking that left me so unsettled was of a white female body lying on the ground with her back to the viewer. Overshadowing her body like a storm cloud is a black animal-like being, pressing itself into her skin.

In the Exhibition Overview I read:

“Both artists tease out our deepest collective cultural experiences, practices and beliefs by proposing evocative truths in the form of fictions and legends.”

For as far as humanity has come regarding race, in a mind’s deep recesses not consciously inhabited, what lies in opposition to whiteness is still blackness.

Fictions and Legends closes this weekend. Don’t miss a chance to experience this engaging exhibit without comparision!