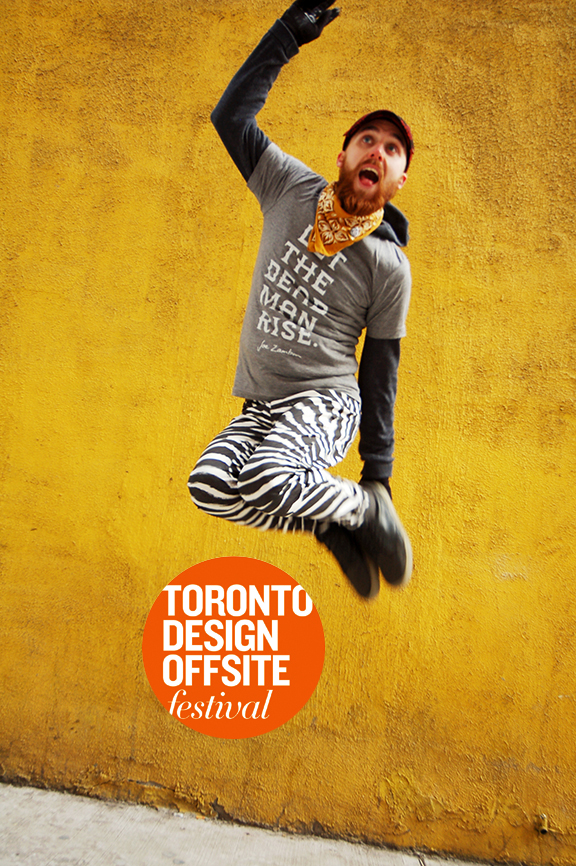 STUDIO JAYWALL, Cut the Cheese, TO DO Tonight! 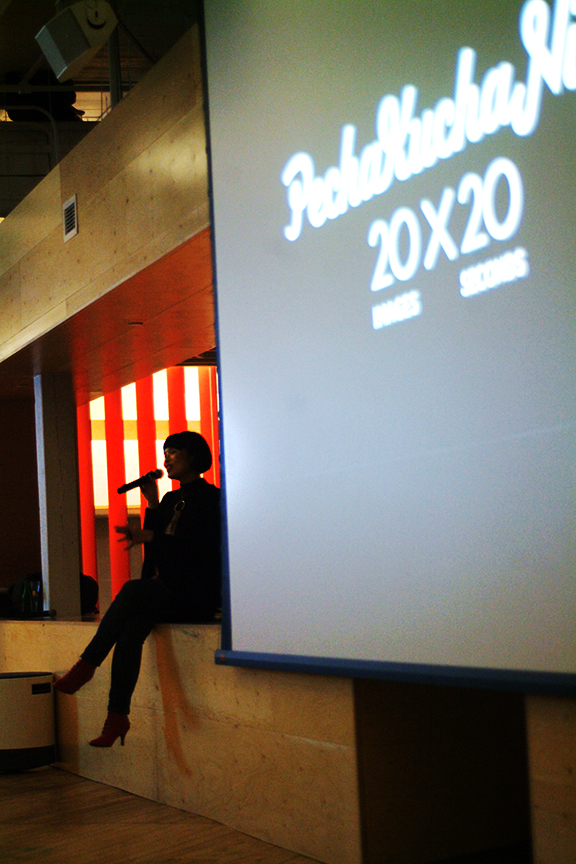 Last night at Pecha Kucha Kevin Yuen Kit Lo of LOKI (Jay Wall’s partner in crime for the show opening tonight in the Junction) asked me how I knew Jay. I couldn’t recall the exact moment of our meeting but I also don’t remember a time when his presence wasn’t somehow on the periphery of my own investigation on how best to support and promote ‘Toronto the Good\ through an alchemic mix of community building, design thinking and iconic visuals.

I was probably first aware of his presence through his work. Jay’s baby is STUDIO JAYWALL a “Toronto-based team specializing in creative direction and graphic/interactive design for social, culture, environmental and city-building initiatives.”

I liked that this guy was using his creative powers for good and that he understood how beautifully designed visuals could motivate people to change – even encourage an activist spirit! 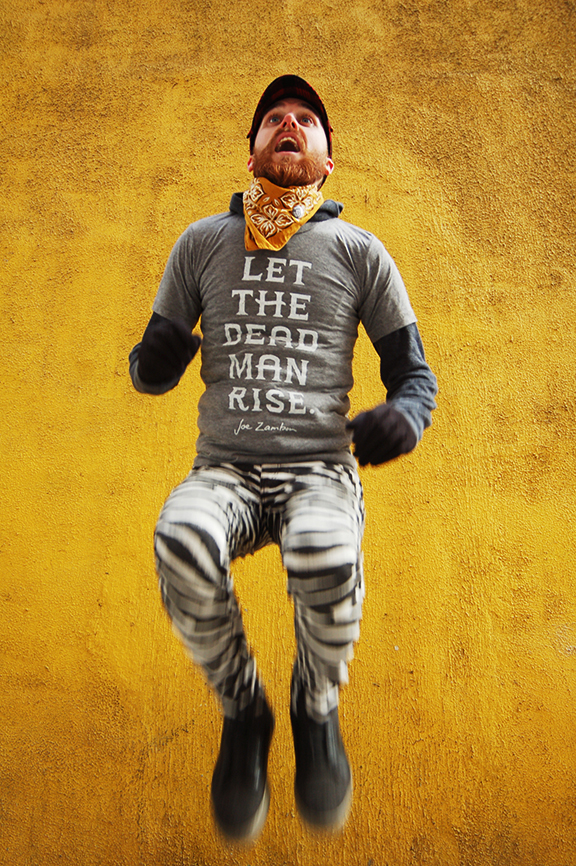 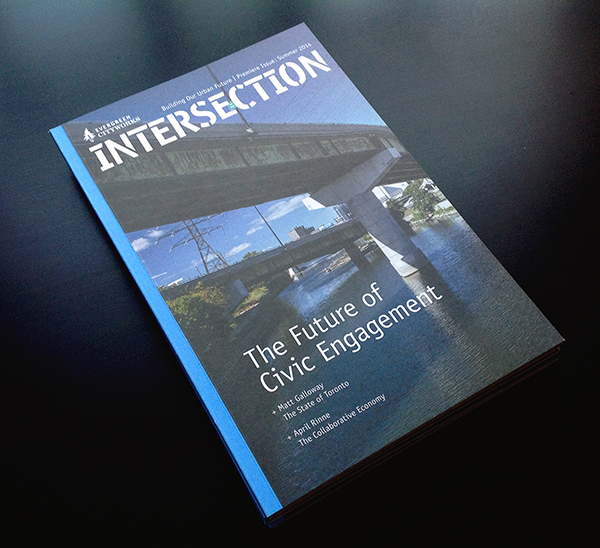 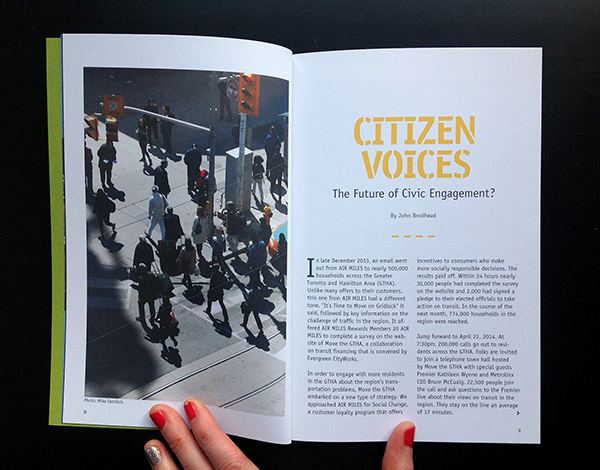 Above images of Intersection (Evergreen CityWorks) provided by STUDIO JAYWALL.

Some of Jay’s local clients include Spacing Magazine, Centre for Social Innovation, Live Green Toronto, Metcalf Foundation and East Scarborough Storefront. Another client is Evergreen CityWorks located at the former site of the Toronto Brickworks in the beautiful Don Valley. For the shoot I had asked Jay to bring some artifacts with him that he felt spoke to design in Toronto. One of the objects he brought was an old Toronto Brickworks brick that he found along the Lake Ontario shoreline. 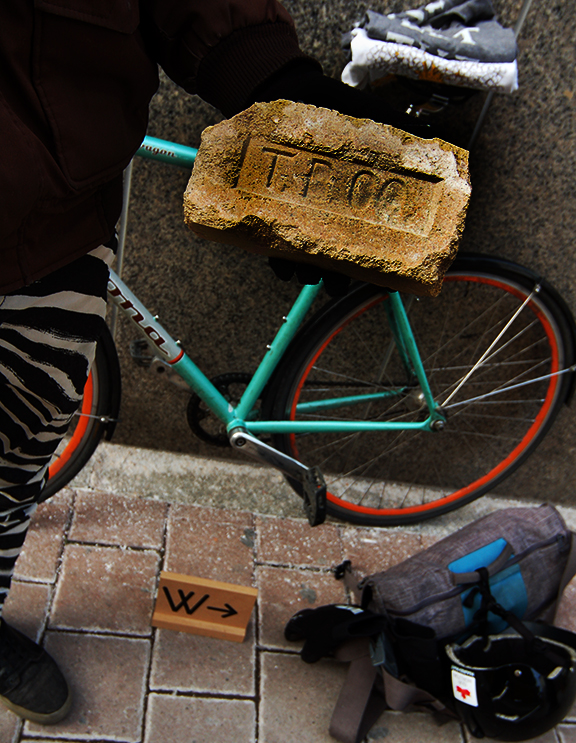 “The type ‘TBCo.’ stands for the Toronto Brick Company which was historically based at the Brick Works. I live near the Don Valley, and I love visiting the Brick Works. It’s also interesting to encounter bricks like this when walking the shore of Lake Ontario, across town from the Brick Works. It’s not uncommon though to find these. Many of the old bricks that the city was built with have been turned to rubble and used as fill to expand the edge of the city out into the lake.

Besides the charm of holding a worn building block of Toronto with old type on it, the letters ‘TBCo.’ take on new meaning for me now. I read them as “To Be Continued” – a reminder that the story of our city is constantly being written, and that we have an important part to play in that. What is the future city that we want? How will graphic design – and decisions as seemingly small as choosing a typeface – help us to get there?” 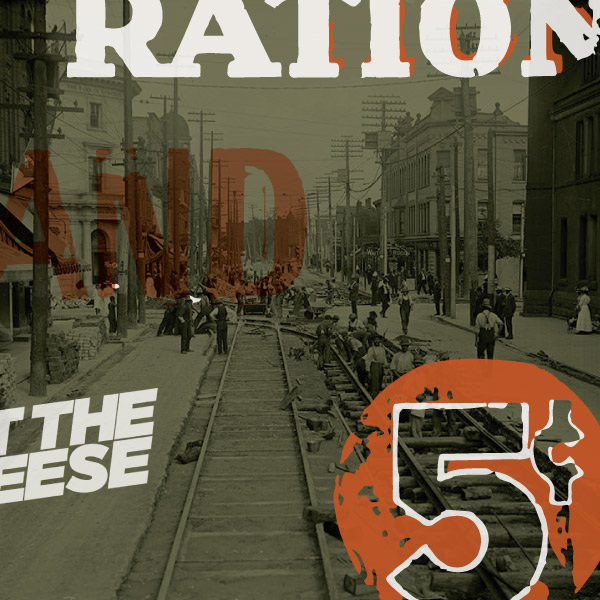 These are the types of questions that informed STUDIO JAYWALL and LOKI ‘s upcoming show at Cut The Cheese, one of the newest restaurants in the Junction. Reading/Writing the Junction opens tonight as part of Toronto Design Offsite but will continue on display until February 28th.
“In a rapidly changing neighbourhood, how does the past meet the future? Through the documentation, re-imagining, and re-composition of vernacular storefront signage, lettering and typography, we present a visual commentary on the changing face of the Junction. We look at how the old and new co-exist – what stays and what gets left behind – in an attempt to spark a conversation about hopes for the Junction’s future.” 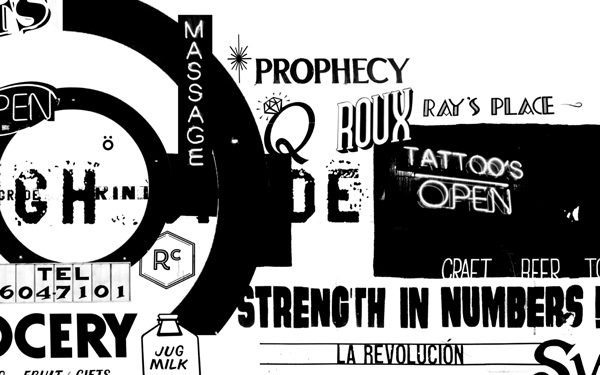 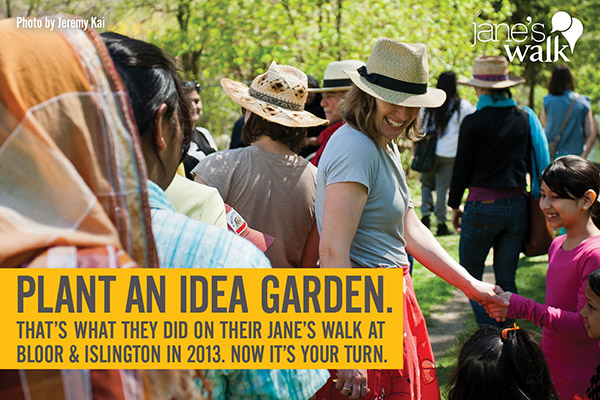 Another artifact Jay brought along was the Jane Jacobs pin he always showcases somewhere on his person. Toronto loves their Jane! When I moved to Toronto my (re)introduction to the city I thought I knew from growing up close by was the unknown stories uncovered through Jane’s Walks around the city.

“I always wear Jane on my jacket or bandana. I like having her company as I’m riding, walking, or working in the city. She’s a powerful icon of citizen-led city-building (especially for Torontonians), and the triad of intelligence, love, and resistance.”

Above and below are examples of STUDIO JAYWALL‘s work for Jane’s Walk Toronto. 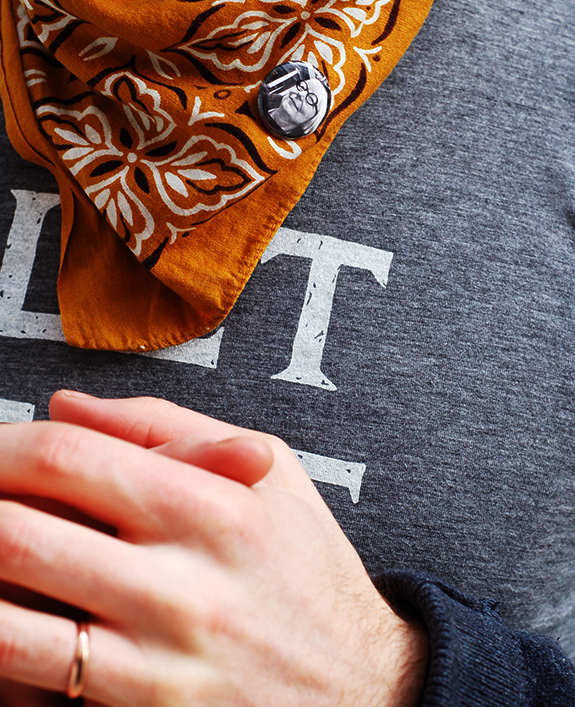 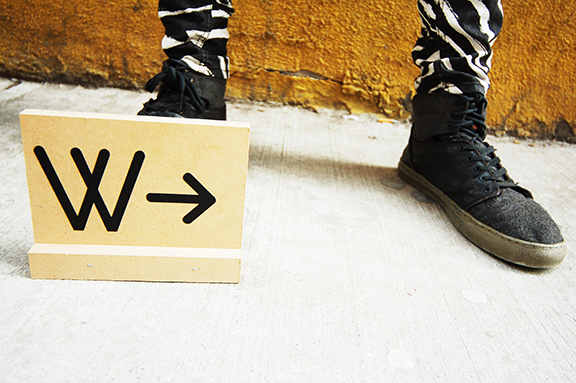 The story behind the “W” and why Jay decided to bring it speaks to the ethos of Jay’s way of working. 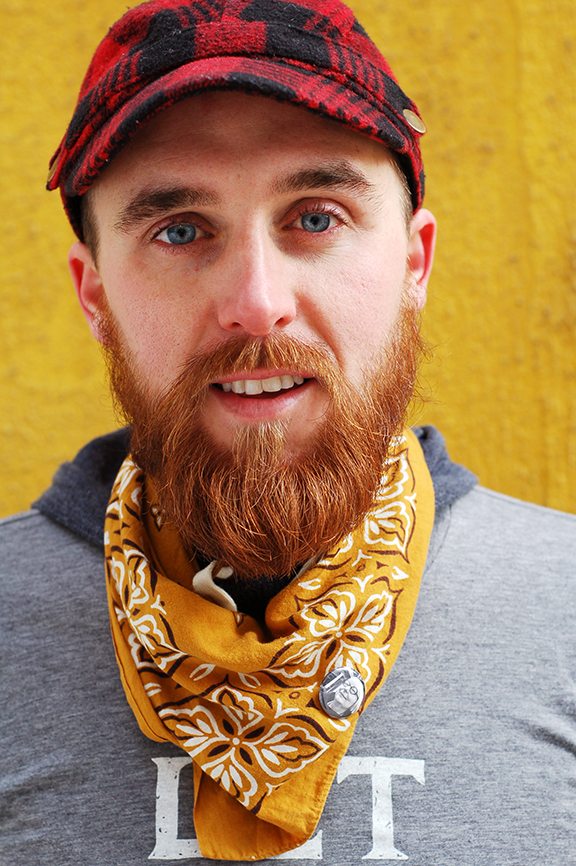 “This is an artifact from my York/Sheridan Design undergrad class grad show exhibition “YSDN 2010.”  The “W” pointed to a table of work created by students whose last names started with W (that’s me). I didn’t actually design this, it’s a typeface that was custom designed by my classmate Jonathon Yule for the exhibition.  It’s a simple reminder of my roots and how I’m part of the collective – like how the W is just one of 26 letters in the alphabet, but no other letter can do the job of the W. In fact, one of the slogans of our show was “The whole is the sum of its parts.” This idea relates to my studio’s work, in that we do projects that contribute to the collective good of society.” 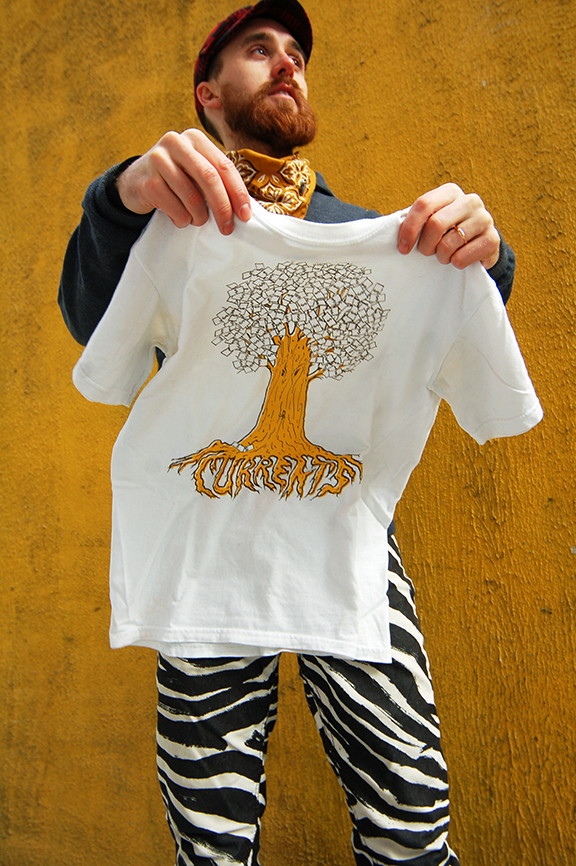 Another example of Jay’s love of typographic expression is this shirt produced by STUDIO JAYWALL for the band Currents.
“We’ve all heard that money doesn’t grow on trees. That was true only until we made this illustration for Ottawa-based post-punk band Currents. The hand-lettered band name fuses into the roots of a money-bearing tree, whose character suits the aggressiveness of the music. We printed the 2-colour illustration onto t-shirts and posters, which have been a hit with fans across North America.” 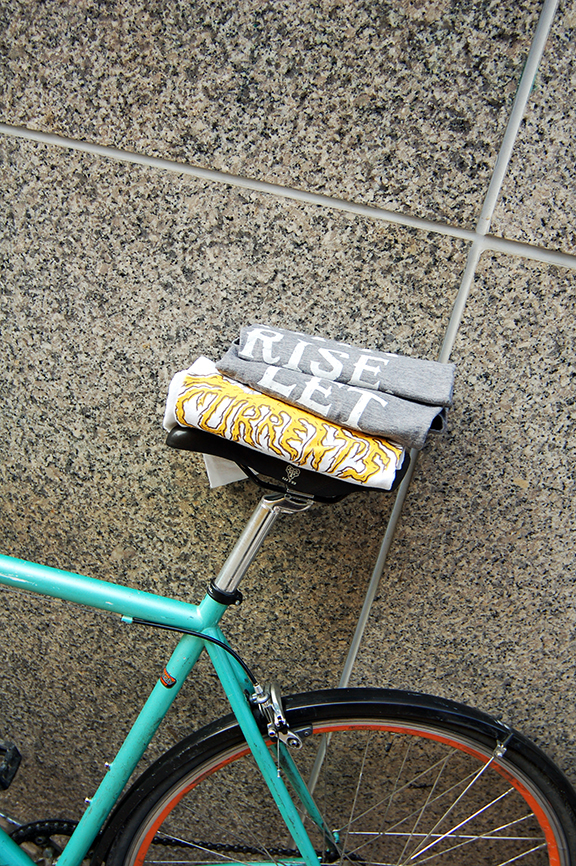 As designers we are constantly scanning our surroundings to take in and then synthesize what we see. The hundreds, possibly thousands of hours, I have spent walking through Toronto has made me understand it better and helped me find its patterns as well as its anomalies. Jay’s way of scanning the city is on his bike. A passionate advocate for a bike-friendly Toronto, Jay is a member of Cycle Toronto and collaborated with the Urban Repair Squad on “street art pieces drawing attention to cycling issues in the city.”
I like that Jay’s way of living is his way of working. They are one in the same. I would say that the most important (although unintentional) artifact of Toronto design that Jay brought along was his bike. Cycling “gives me a ground-level perspective on the city that informs my work. With my studio working a lot on sustainable city-building projects, where environmental and social issues intersect, we get to advocate for bike infrastructure in our own visual way.” 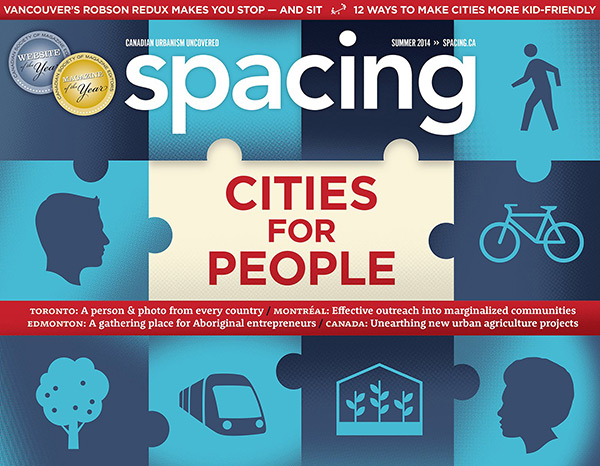 No doubt those future hours that Jay spends engaging with the city while on wheels will bring us more wonderful visuals that may someday become someone else’s artifacts for good design in Toronto!
You can follow Jay on
Facebook, Twitter and
Instagram.
For more information on tonight’s opening of Reading/Writing the Junction at Cut the Cheese join the Facebook Event Page.
Also on tonight is the Toronto Design Offsite’s launch party at SMASH in the Junction. For the full list of tonight’s programming and other #TODO15 openings in the Junction tonight click here.
Various typographic logos designed by STUDIO JAYWALL. 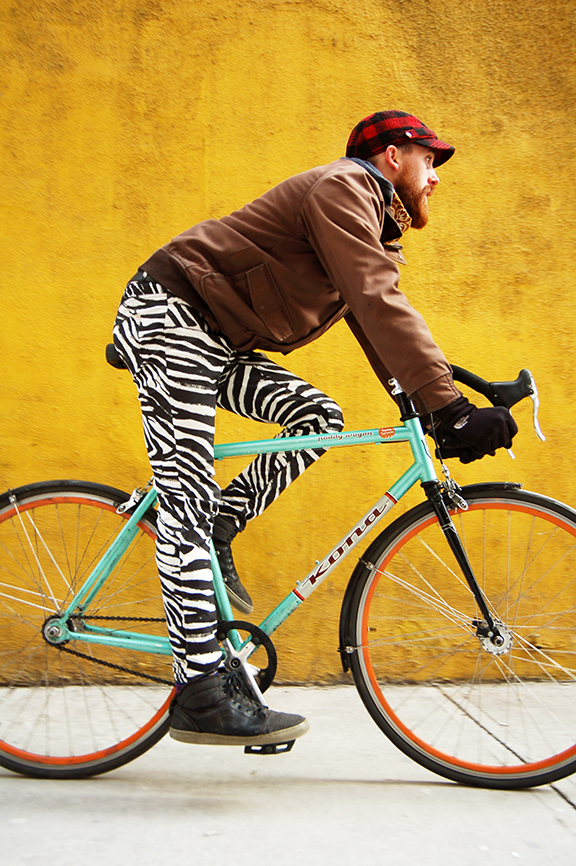 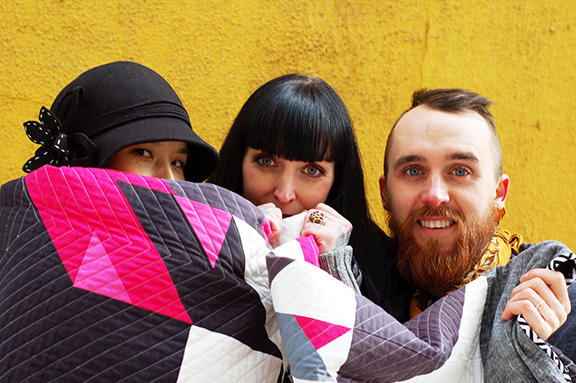 From left to right: Vivien Leung, Libs Elliott and Jay Wall.
Unless otherwise noted, all above images by Leah Snyder for Mixed Bag Mag.