KW | AG’s Senior Curator Crystal Mowry sharing what gets her thinking about cultural institutions and the manifestation of nostalgia.

As we demographically shift as a country so do our demands on how our cultural institutions curate the visual experience of who we are as a Nation.

The galleries and art spaces that are progressive in their programming are the ones who will remain relevant to a population that doesn’t singularly reference Europe as ‘THE’ source of artistic inspiration. Monday’s event “Critical Dialogues: Cross-Cultural Perspectives on Curating and Artistic Practice” (hosted by Ontario Arts Council and Ontario Association of Art Galleries) pulled together an interesting panel of curators that demonstrated that things are indeed changing!

The day was divided into two panels moderated by independent curator and art consultant Betty Julian and The Power Plant’s new Artistic Director Gaëtane Verna. Each of the presenters shared how their curatorial practices began as intentional acts of defiance against issues regarding historical amnesia, nationhood, exclusion, gender and race.

When speaking about their show 28 Days: Reimagining Black History Month Pamela Edmonds & Sally Frater of Third Space Art Projects said that their motivation “arose from ambivalence that we had towards Black History Month and how it is usually disengaged from contemporary art. There is a typical [predicatable] aesthetic, the content usually reflecting on the subject of slavery.”  Pamela and Sally also take issue with how Canada is often left out of the conversation on the Black Diaspora and 28 Days was a deliberate attempt to address this and bring Canada into the dialogue.

Vicky Moufawad-Paul, Artistic Director at A Space Gallery sees the gallery as a social laboratory and her curatorial practice is centred on the ability art has to communicate to its audiences and raise necessary questions. In “Blown Up: Gaming and War”, a provocative exhibit on war games, Vicky asks what happens when the subject finds that they are occupying a contradictory position. One of the works in the show, Weak by Mohammed Mohsen “is a poetic exploration of the architecture of gaming and its impact on a colonized subject who grew up playing these games. Having experienced one of the few ineffectually censored access points to western media in Saudi Arabia in the 1980s, Mohsen suggests ways in which video games were a troubling source of pleasure and political anxiety.” (cited from www.g101.ca) 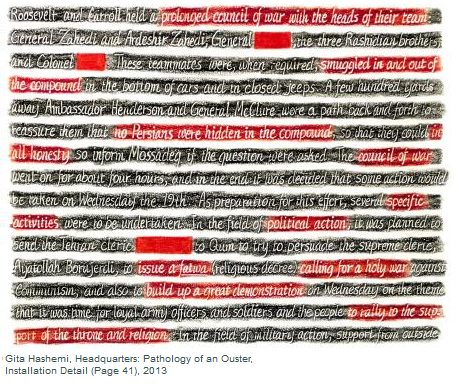 The current exhibit at A Space Gallery is Time Lapsed by Gita Hashemi. The exhibit is about the “historic events in Iran, distilled through a unique web of analysis and channeled into insights that are ultimately as personal as they are historic and political.” (cited from www.aspacegallery.org)

For Gita it was the personal political that pushed her into curating.  “I came to curating because there was a lack of Iranian women but there was a lot of talk about us but not by us.” As an artist, out of necessity, she began to self-curate and says that the “serious separation between artist and curator is a questionable proposition for me.” Is it time that we see more artists like Gita take up a hybridized role of artist / curator? Judging by the presentations of the panel this is already happening.  Along with Gita, Camille Turner and Crystal Mowry, Senior Curator at Kitchener Waterloo Art Gallery, also spoke of how they move from artist to curator and back again depending on their project needs.

Camille opened her presentation by asking “why is Blackness still a surprise in Canada?” Good question. Her projects, regardless of the role she takes, are about “locating discarded narratives” as well as challenging our “Nation’s foundational narratives.” Camille’s project Hush Harbour arose from thinking about how space reveals and conceals.

“HUSH HARBOUR is a SonicWalk that incorporates sound, walking through space and listening through headphones to (re)imagine Toronto’s Black past and to remap Blackness onto the Toronto landscape. HUSH HARBOUR transforms the space that currently hides the Black presence and enables participants to travel back in time. Sound is recorded binaurally and creates an immersive three-dimensional world in which to explore the Black experience.” (cited from www.camilleturner.com)

Another curator who like Camille is challenging Canada’s foundational narratives is Jessie Short, National Coordinator for the Aboriginal Curatorial Collective / Collectif des Conservateurs Autochtones. The mandate of ACC / CCA is to inform “the public about the role of Aboriginal art curators in protecting, fostering and extending Aboriginal arts and culture in North America and around the world, through acquisition, conservation, interpretation and exhibition.” (cited from www.aboriginalcuratorialcollective.org)

With symposiums like Revisioning the Indians of Canada Pavilion: Ahzhekewada [Let us look back] curators like Jessie are taking on the task of calling Canada out on how the stories of this Nation’s Indigenous Peoples are often referenced in the past tense disposing of how First Nations, Inuit and Métis in Canada are impacting and contributing to contemporary culture.

The entangled question of how settler / migrant / indigenous dynamics play out in reality against Canada’s well branded status as a progressive Multicultural society was raised by panel members. Srimoyee Mitra, current Curator of Contemporary Art at the Art Gallery of Windsor and former Program Coordinator at SAVAC (South Asian Visual Arts Centre) related that upon coming to Canada as an international student she was confronted with this clear fact – Canada’s “open” society had closed off and concealed narratives below the surface. In her current curatorial endeavour at AGW she explores the contested spaces that geographical borders can become and how in the context of North America’s Indigenous Peoples the creation of the US / Canadian Border fixed fluid populations to a static location / nation slicing through established communities and family lines.

“Taking place annually from 2013 – 2015, Border Cultures is an exhibition-in-progress, conceptualized as research-based platform for artists and cultural producers to explore and examine the border through different lenses: Border Cultures: Part One (homes, land) in 2013; Border Cultures: Part Two (work, labour) in 2014 and Border Cultures: Part Three (security, surveillance) in 2014. The objective of this series is to mobilize and connect the ongoing critical dialogues on national boundaries in Windsor, with multiple and diverse narratives and experiences of border contexts in different parts of the country and the world. Border Cultures: Part One (homes, land) brings together artists working locally and nationally with those exploring these issues in Ireland, Mexico, Palestine to list a few. Using drawing and printmaking, sculpture and photography, video and sound-based installations, artists in this exhibition develop nuanced critiques and perspectives on questions of nationhood, citizenship and identity in the border-lands” (cited from www.artgalleryofwindsor.com)

Putting theory into practice and walking the talk.

It’s not only the programming in the galleries that needs to be revisioned but also the programming in academic institutions. The discourse that occurs in educational settings can filter out into the practice of alumni to have tremendous impact. Programs like OCAD U’s Indigenous Visual Culture Program allow both Aboriginal and Non-Aboriginal students to benefit from the rich artistic history and core values of Aboriginal Peoples.

Andrea Fatona, Assistant Professor in the Criticism and Curatorial Practice Program at OCAD U, related that when she began her career in the 80s she started by contesting the exclusion of people of colour and Aboriginal Peoples. She goes on to say that it was even hard to find a “language” to address the issues she was grappling with. Andrea shares that it was Paul Gilroy’s book The Black Atlantic: Modernity and Double Consciousness that “gave me a language to debunk the notion of a universal aesthetic.” 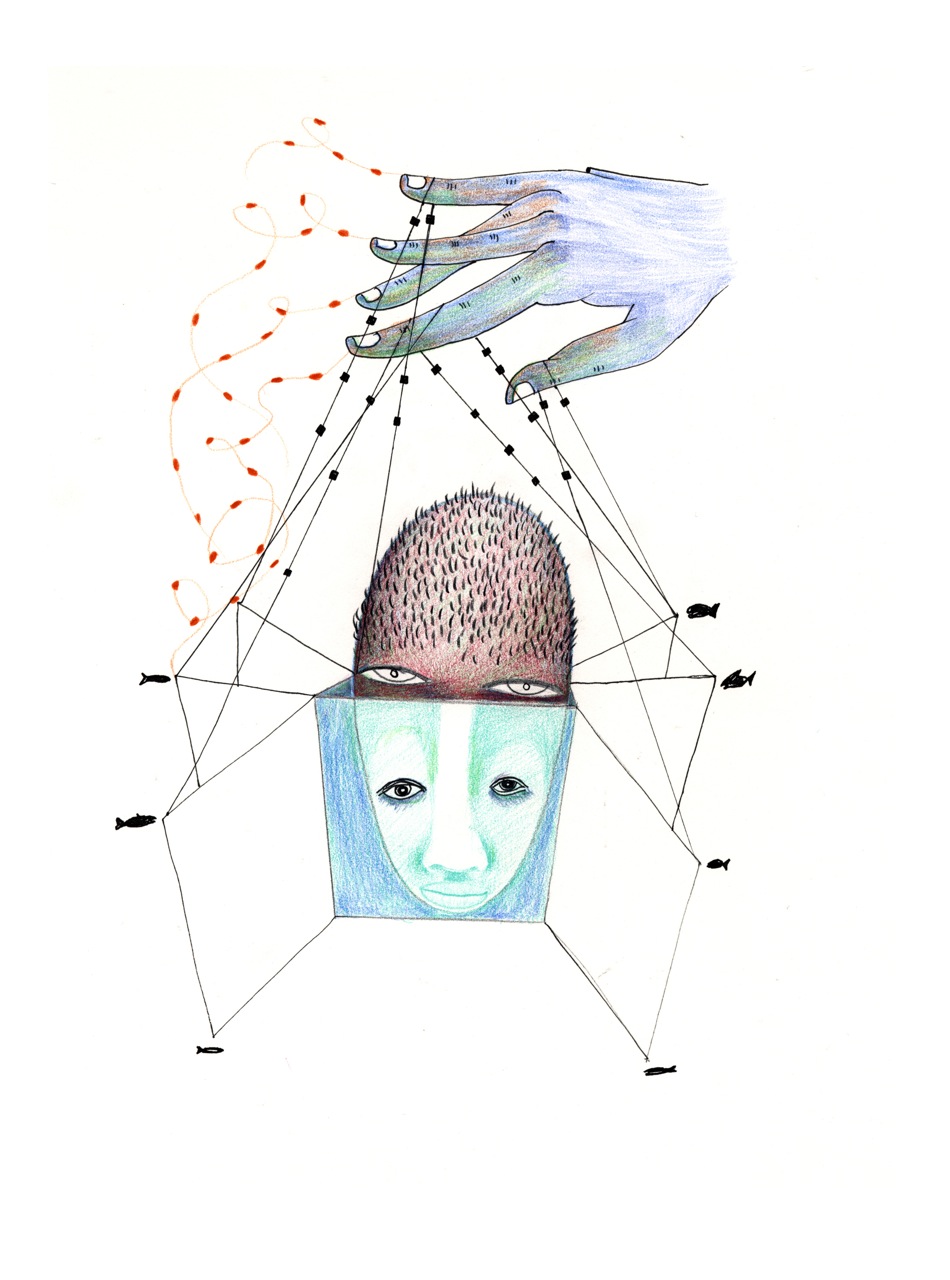 It is gatherings like these that allow us all to explore language and collaborate on stringing together the words that best express our ideas. It is also in these types of spaces where we are able to see how the cross-cultural nature of artistic expression in Canada has given us a visual legacy that is incredible in its depth. The presentations by curators Yan Wu of Gendai Gallery and Tamara Toledo of LACAP (Latin American-Canadian Art Projects) showcased wonderful portfolios of work by Asian Canadian and Latin-American Canadian artists  but in the time allotted they only scratched the surface.

Above art work by Z’otz* Collective.

Softening the silos and creating more cross over communication. 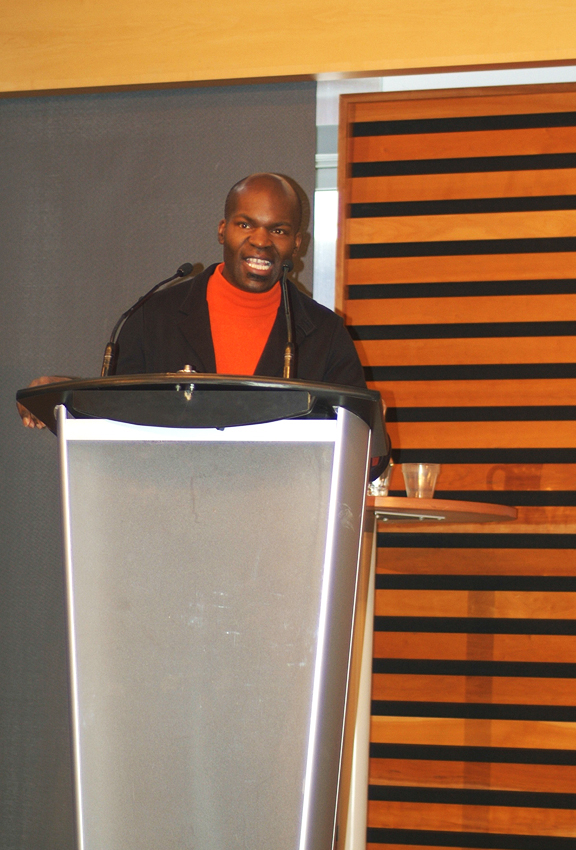 Not just about cultural diversity, this event was also about encouraging a multiplicity of professional voices to be heard by softening silos within the institutions as well as igniting dialogue between all types of art spaces. Keynote speaker Dr. David Dibosa’s call to action was to “bring together your skills” as employees of institutions, community activists in artist-run-centres and independent curators, for it is in these overlapping perspectives we can locate the new directions and the right solutions. He also encouraged the audience to go even further outside the comfort of disciplinarily silos. “Don’t reach for solidarity [with your professional community], go beyond!” Part of the team who executed the research on the groundbreaking project Tate Encounters, Dr. Dibosa related that even the “intelligence of the cleaners and the guards” is important as they “have expertise on the exhibitions that is unique.” In other words, for cultural centres and curators to truly reflect the value of their public they must go broad in their inquiries. Dr. Dibosa feels that it is “only with this detailed knowledge we will ensure that the dialogue will reach and we will hear what needs to be said.” 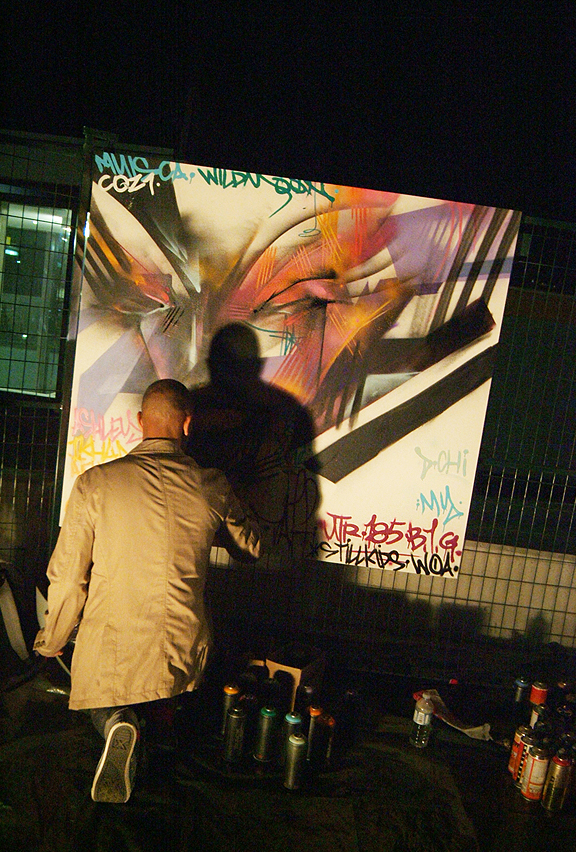 An organization already doing this well is Manifesto, a not-for-profit community-based arts organization that believes in the transformational power of art. Manifesto’s Visual Art Director Ashley McKenzie-Barnes gave great ideas as to how get an audience engaged. Taking advantage of new technologies the Manifesto team encourages attendees to submit post-event digital evaluations. They also utilize low-tech traditional town hall meetings to get important feedback. By doing this Manifesto has been able to galvanize their audience, extend their brand and produce great programming relevant to their community.

Reflecting back on the entire day and the words of each presenter, MIXED BAG MAG was encouraged that in Canada we have a wealth of professionals who approach their practice with rigor and the intention to be self-reflexive, collaborative and inclusive. Quoting Dr. Dibosa “the challenge of democratization is how do we reflect the values of our audiences and [ensure] that their voices are continually heard?”  Monday’s event demonstrated that Canada’s new breed of curators is up for that challenge! 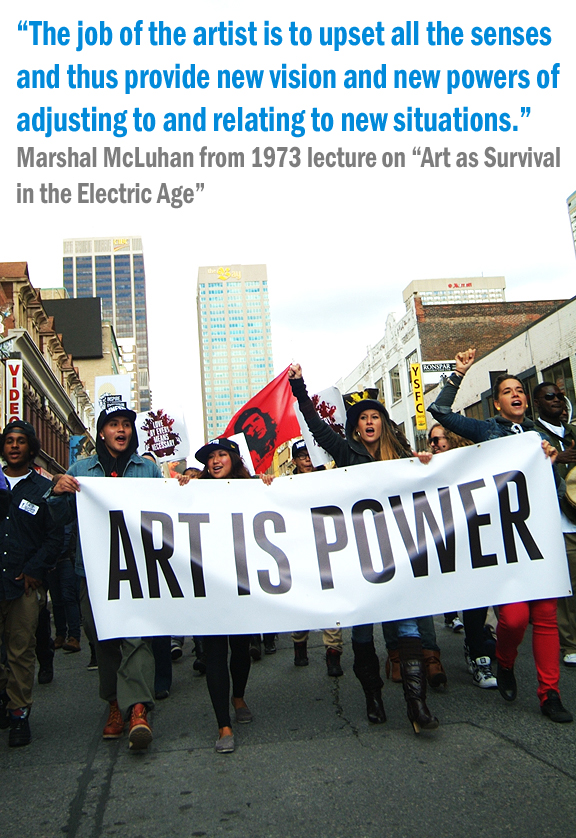 MIXED BAG MAG thanks Ontario Arts Council, Ontario Association of Art Galleries and all the presenters for an important and provoking event.