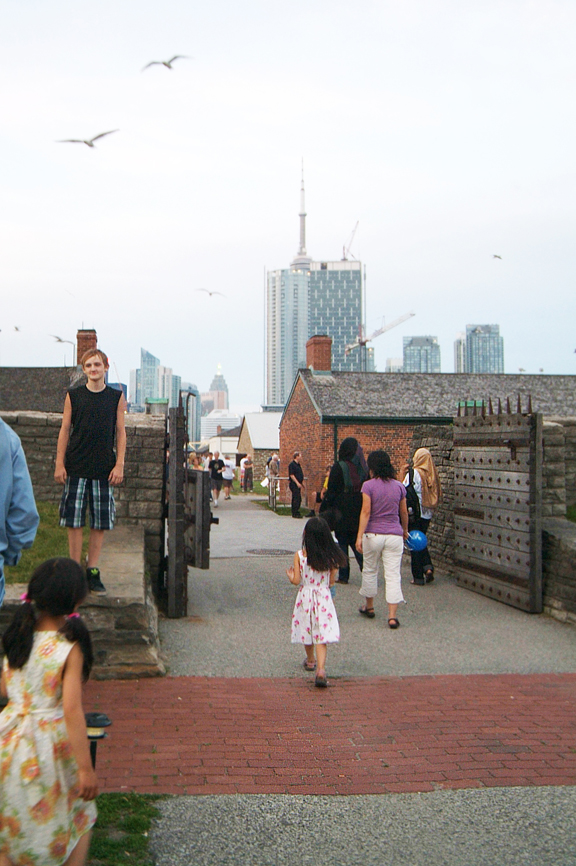 Past history and present tense invoked with installations at Fort York, Toronto.

Today we know of Fort York as the (barely visible) small patch of green space that buffers the expansive condo development that now grinds against the north and south sides of the Gardiner and barricades us from a view of the sky.

In 1793 the plan for a garrison was put into place by John Graves Simcoe. At the time, Niagara was the capital of the province but Simcoe felt that Toronto was a more suitable place for a naval base that would protect the area from the possibility of an American attack. Soon after, it was decided to move the base again – to Kingston – but a community had already developed around the area and by 1800 there was a residence built for the lieutenant-governor on the site.

In the spring of 1813 the Fort was attacked by the Americans. Both the Indigenous nations of the Mississaugas and the Ojibwa assisted Canadian and British forces to keep the Americans at bay but in the years the followed Fort York was continually attacked and occupied by American Forces. Eventually, due to the victory of the British in the War of 1812, Fort York became a more stabilized community that grew to become the settlement that was renamed Toronto in 1934, from the Kanienke’haka (Mohawk) word Tkaronto meaning “the place in the water where trees are standing.”

Two centuries of peace have passed but the site still remains to commemorate the battles and lives lost.

It has also become a great place to showcase dramatic and large scale art and performance. 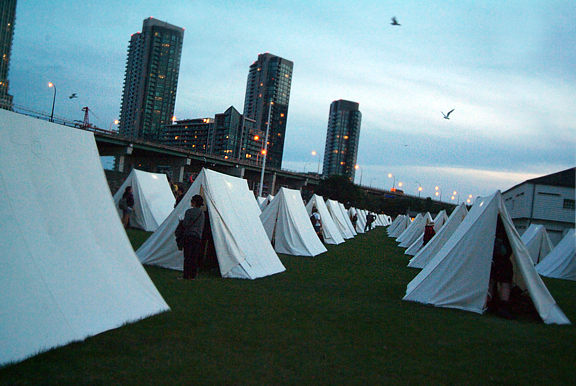 In 2012, as part of the commemoration of the 200 years since the war of 1812, Luminato staged a massive art install at the Fort called “The Encampment.”

“Marking the bicentennial of the War of 1812, The Encampment is both a luminous large-scale art installation and a kind of metaphoric archaeological dig—one that unearths not physical artefacts but long-buried shards and strands of human experience. Conceived as a “temporal village,” the installation comprises 200 A-frame tents pitched on the grounds of Fort York, which fell to U.S. forces during the war. Each tent contains an installation by one of 200 artistic collaborators, selected via an open call for contributors. Each creates a visual representation of an aspect of the war’s civilian history, gleaned from research into real-life stories of family, love, loss, survival, patriotism, collaboration and betrayal. Visible at a distance from several downtown locations, the massive assemblage of tents presents a wondrously glowing sculptural landscape. Explored at close quarters and through social activations, it offers poignant insights into the lives of ordinary people swept up in the epic drama of history.” More info… 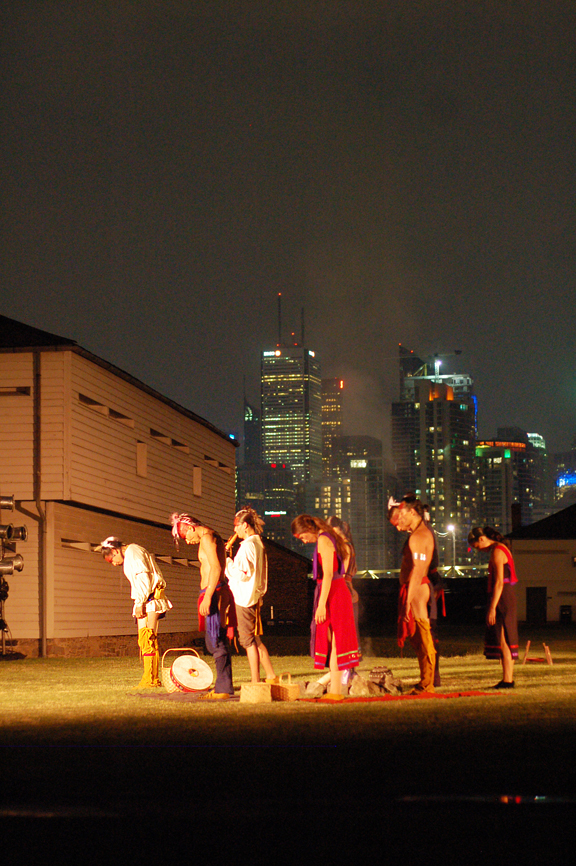 In 2013 The City of Toronto commissioned Kaha:wi Dance Theatre to create a site-specific performance for Fort York that would also travel to Woodland Cultural Centre and Old Fort Erie.

“The Honouring pays homage to First Nations warriors of the War of 1812, featuring Onkwehonwe families who sacrificed to protect Haudenosaunee sovereignty, culture and land.” More info..

Now in 2014, Nuit Blanche has put curator Magda Gonzalez-Mora (Before the Day Break Zone) in charge of creating a (safe) space that reflects on socio-politics, security, pluralism, and of course war.

“Body of War reflects on how man becomes a soldier through the relentless repetition of acts of violence. What happens to the psyche as it learns to transgress social principles and integrates the willingness to kill? Set in the geography of the Normandy Landings and punctuated by testimonies of retired and serving soldiers, a mis-en-scene of visceral hand-to-hand combat is gradually deconstructed. The viewer is invited to engage in the relationship between human intimacy and the brutality of war choreography.

Body of War is as much an ode to the human inside the solider as a question of military structures.” More info…

Male models expose body parts – lower backs, chests, abdomens – peek through holes, materials and standard clothes are transformed into pieces that follow normative fashion standards while calling them into question. Chic Point bares the loaded politics of the gaze as it documents the thousands of moments in which Palestinians are forced to undress in the face of interrogation, as they attempt to move through the intricate and constantly expanding network of Israeli checkpoints.” More info…

“The work is an attempt to explore world orders that defy geo-political definition. A red carpet-flag allows the audience to experience the glamour of walking down the catwalk, while unexpectedly being confronted with different political ideas regarding the fall of a totalitarian system.” More info…

“Located on the original shore of Lake Ontario, Fort York was built for defense. Over time, the Fort has stood its ground against enemy advances, expressways and condos as the lake’s edge has pushed further away. Situated in this context of protection and resistance is Melting Point, a sound and light based installation. Melting Point stocks a pair of cannons with an artillery of glowing good feelings, in the form of sparkling tributaries of light pouring from the mouths of the old weapons. Accompanied by a chorus of rolling waves and trilling harps, the work lays a defense agsinst the swirling market forces beyond, countering hard with soft and dark with light and creating a safe space for Art.” More info… 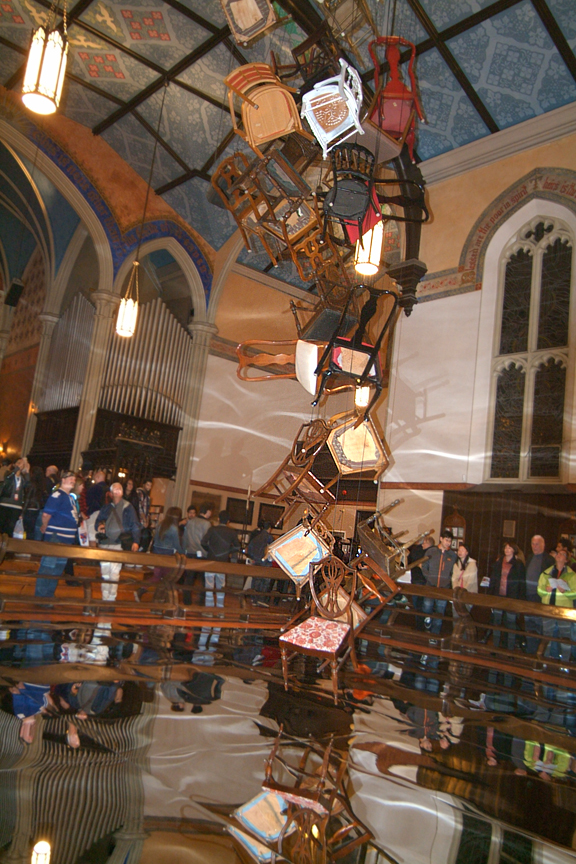 Also on the Fort York site for the Before the Day Break zone is work by one of my favourite Toronto artists, Bruno Billio, whose piece Familia (seen above) was definitely my top choice for my Nuit Blanche 2013 experience.

“Mismatched chairs are gathered from households for re-creation of the moment of a family function. Initiated by the audience, the movement of these objects creates the sounds of a family shuffling their chairs into position at the table.

The mirrored floor captures the physical reflections of the audience and the chairs, imbued with personal nostalgia, thus becoming the medium that retains and reflects private experience and memory.” More info…

“Bright Bundle is a light sculpture ablaze with pulsating light and sound representing the past and present of growth, prosperity, culture and the future. Set in the centre of Fort York, this 1000 metre ribbon of LED lights will glow and pulsate in a golden-white colour seen from a distance and beckon audiences from surrounding pathways towards it to bath in the glow of  its pulsating  lights and sound.” More info…

Wishing everyone a safe (and dry) night!

NOTE: Ascendant Line & Melting Point will continue to be on display until October 13.

“Before Day Break contemplates a sensitive artistic practice. Evoking the complexity of life itself, artists from diverse regions will offer singular perspectives in an attempt to cover different angles of reality. Through these practices they enable the audience to turn the ordinary into extraordinary artistic memory. Like the pixels in a photograph, human relationships, religion, socio-political and cultural behaviour are among the themes used to present a deeper message that speaks to the universality of the human experience. Motivated to challenge and surprise the viewer’s expectations, this vibrant environment will invite reflection on contemporary history, while juxtaposing it to Canada’s quest for inclusion and plurality. All of this leads to satisfaction of the eye and the intellect.Before Day Break defends and trusts the restorative power of art.” More info… 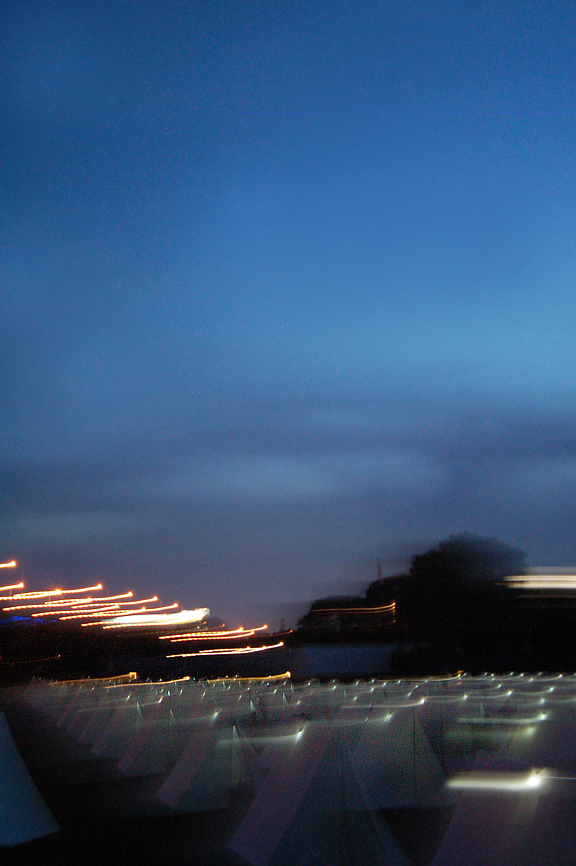 All images above by Leah Snyder for Mixed Bag Mag unless otherwise noted.