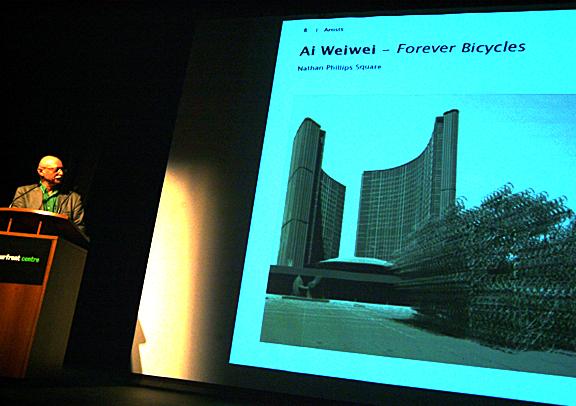 Re-inventing the wheel – what Duchamp’s Ready-mades, Ai Weiwei and Toronto’s cyclists have in common. 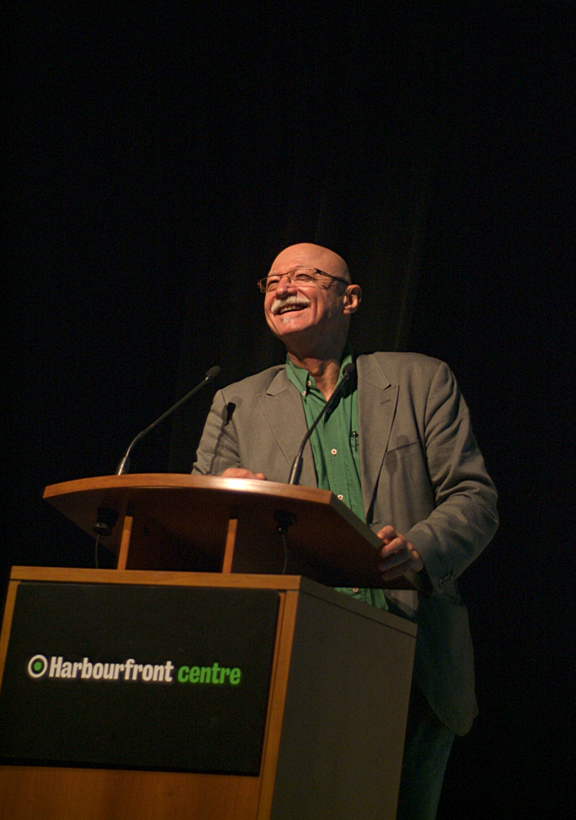 “In 2013, we will celebrate the centenary of the Armory Show, the International Exhibition of Modern Art that was organized by the Association of American Painters and Sculptors in the vast spaces of U.S. National Guard armories, New York and is considered as a breaking point, crucial in the history of modernity. Among the scandalously radical works of art, pride of place goes to Marcel Duchamp’s cubist/futurist style Nude Descending a Staircase. The same year, Duchamp installed a Bicycle Wheel on a chair in his studio and this is considered as well as the starting point of the intrusion of “Ready-mades” (found objects which Duchamp chose and presented as art) in the art world. The idea was to question the very notion of Art and the artistic attitude towards objects. The objects found on the street, chosen by the artist, will take an aura of art object within the frame of the art institution. We now live in a century where objects exist in the museums and the exhibition spaces. If we take the objects back to the street in the context of an event like Nuit Blanche, while allowing the artists to treat and handle them as referenced works of art, we hope to close the loop and reconcile the public with the status of the ubiquity of the object.” ~ Ami Barak, Visiting Curator for Nuit Blanche 2013 on “Off to a Flying Start”

While listening to French curator Ami Barak speak at this week’s Power Plant lecture regarding his curatorial choices for Nuit Blanche I couldn’t help but think of one of this city’s advocates for cyclists and how she’s probably excited for all the focus placed on bikes this year.

Taking it to the streets.

Yvonne Bambrick is a woman about town – on her bike. An Urban Cycling Consultant she has also worked in the capacity of Community Animator for the Centre for Social Innovation, the first coordinator for the Kensington Market BIA and is the current Coordinator of the Forest Hill Village BIA. She knows our community and our city’s streets well and can often be found quoted in the press about the problems Toronto faces as it expands without a clear course of action for the people in this city who choose bikes over cars.

“In addition to the significant lack of on-street bike infrastructure, one of the biggest issues for those riding bikes to get around the city is the condition of the roadways. Years-old utility cuts and potholes are a major hazard on some of the most heavily used routes. This terrible road surface is often found in the already difficult to navigate space between the doorzone and streetcar tracks on most of the East-West routes – this creates an even more dangerous scenario for even the most experienced riders.“ 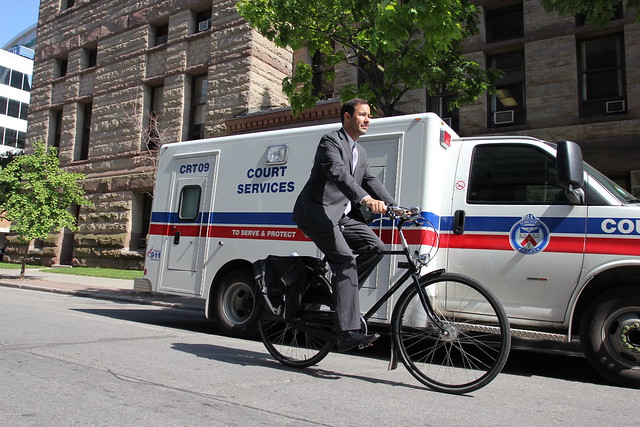 Above image by Yvonne Bambrick for The Urban Country Magazine.

Toronto’s Arts Festivals seem to have a knack for intuitively selecting themes that are timely – Luminato’s choice for its 2011 production of 1001 Nights and that year’s focus on Arab performers and writers helped expand the dialogue around the Arab Spring immediately after it happened. Ami’s choice for installing Ai Weiwei’s Forever Bicycles at City Hall corresponds well with Ai Weiwei’s current exhibit at the AGO that speaks to human rights abuses by the Chinese government but perhaps unanticipated, although certainly important, is how Forever Bicycles speaks to Toronto’s recent issues and the rights of its citizens to have their concerns regarding cycling acknowledged by our government.

Speaking about Forever Bicycles Yvonne says “It’s such a thrill that it is on the doorstep of City Hall. I can’t think of a better place for it to be! Hopefully it sends a message and is not just seen as a structure made of bikes – that it resonates with people at city hall as relating to current issues.” 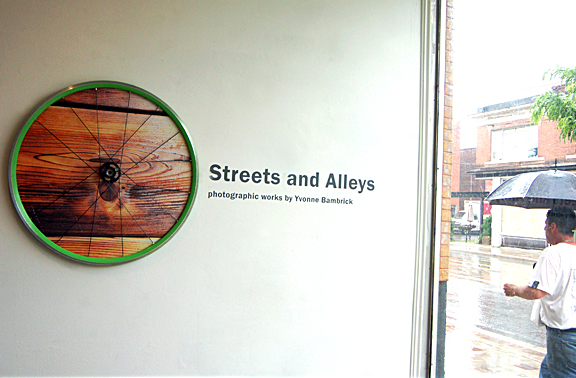 Deconstructing the object by displacement.

Also an artist, Yvonne’s own bike inspired and politically motivated work was on display recently at the Hashtag Gallery on Dundas Street West. Yvonne snaps the city at street level then uses deconstructed bike wheels as frames – an interesting way to open up dialogue around the issues. 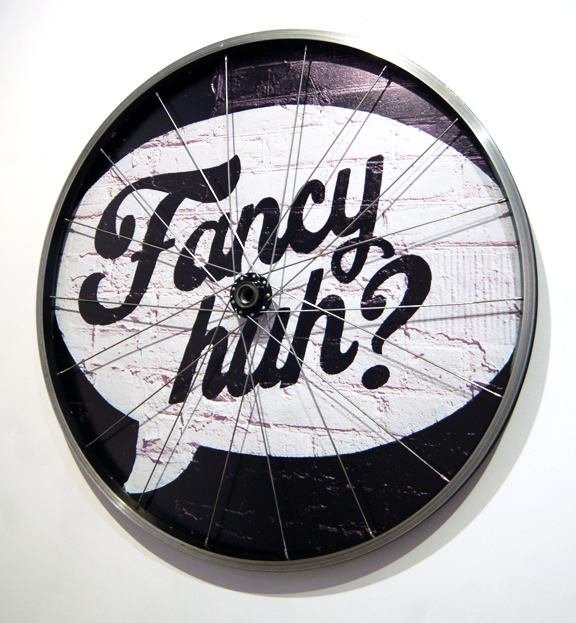 Duchamp’s removal of an object from its familiar state and his presentation of it as an objet d’art was one of the actions of modernity that domino affected us into a century of change. The referential impact still reads as contemporary into the 21st Century as exemplified in works like Yvonne’s as well as those selected by Ami for Saturday’s big event. Thanks to Ami the dislocation of both objects of motion and objects of rest can be seen this year at Nuit Blanche – Toronto artist Bruno Brilo’s Familia, Garden Tower in Toronto by Tadashi Kawamata, Tortoise by Michel de Broin, Melik Ohanian’s El Agua de Niebla and Pascale Marthine Tayou’s stunning presentation efficiently titled Plastic Bags. 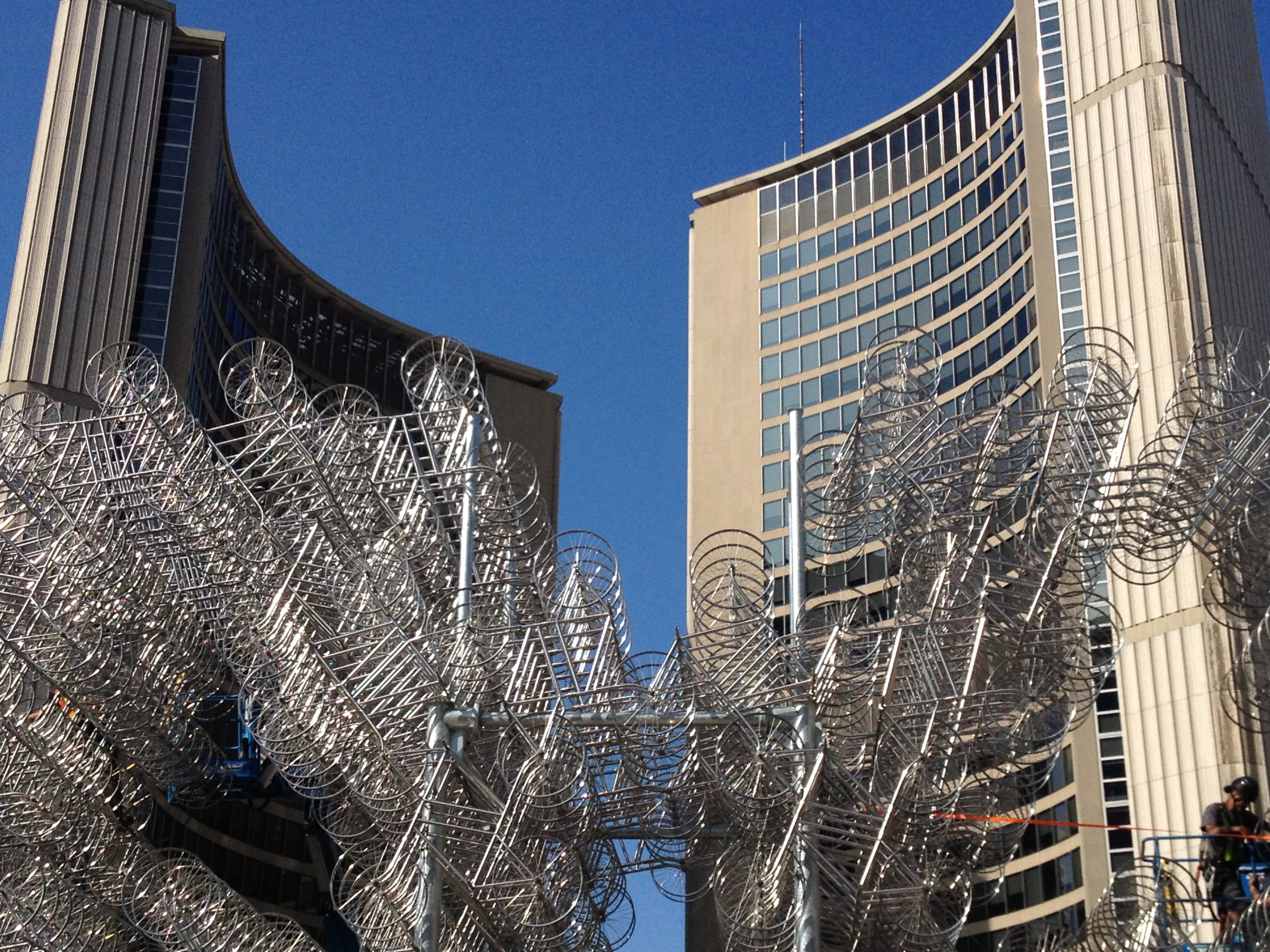 Above image by Yvonne Bambrick

The ubiquity of bikes.

For Ami, this idea of the “répétition du même objet” and how objects repeated over and over change the meaning is important. For Yvonne “speaking to this idea of repetition, I think that at this stage in Toronto it is too hard to ignore that so many people are choosing bicycles and that they are everywhere! You can’t ignore that much of the voting population and that how the city functions with regards to transportation includes bicycles.” 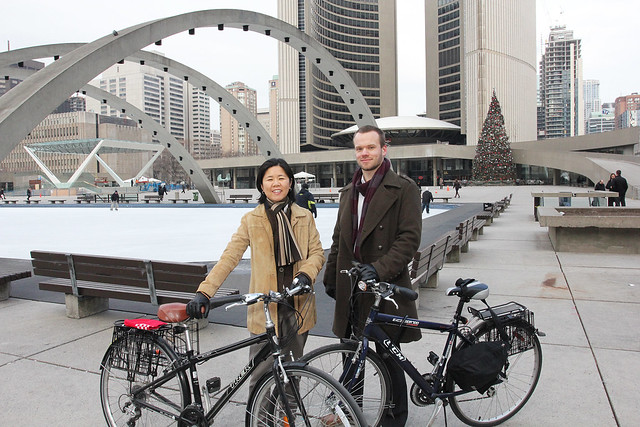 Above image by Yvonne Bambrick for Dandyhorse Magazine.

For more information on how you can be a part of the movement to make Toronto a more bike-friendly city Yvonne recommends Cycle Toronto. “They are a city-wide cycling advocacy organization who are working year-round on improving conditions for people riding bikes in the city.” 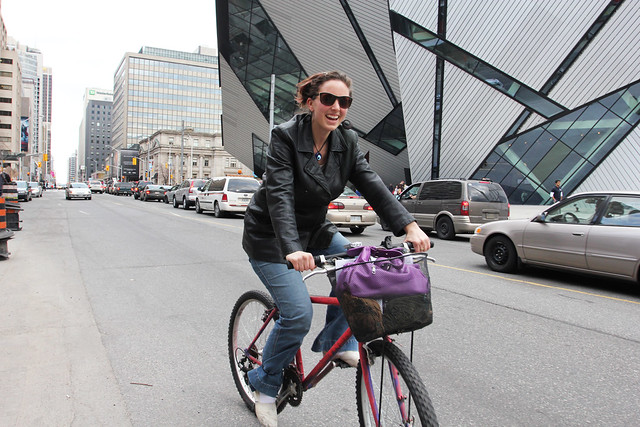 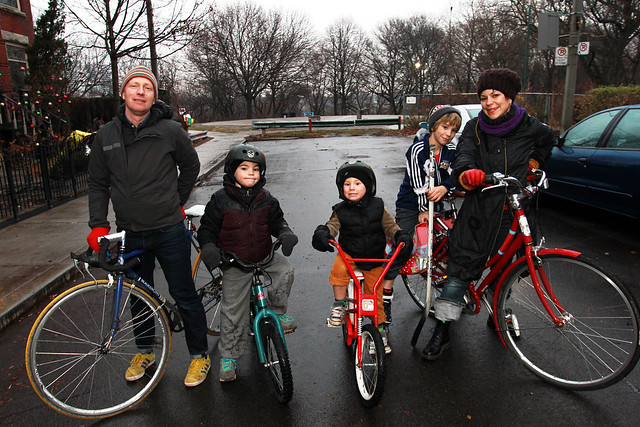 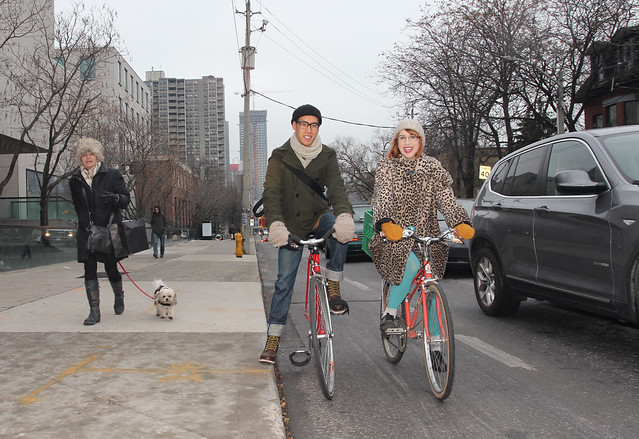 Above 3 images by Yvonne Bambrick for Dandyhorse Magazine.

For more information on Ami’s curatorial statement for “Off to a Flying Start” check out the Consulate General of France’s initiative Paris-Toronto and Nuit Blanche.

FYI – If you missed Ami’s talk this past Monday you can hear him again Saturday afternoon at 2 pm at The Power Plant along with the other Nuit Blanche curators – Patrick Macaulay, Ivan Jurakic and Crystal Mowry.

Every which way, by Kim Adams. Courtesy of Diaz Contemporary. (Image via Dandyhorse Magazine.)