A whole lot of H’Art at Ottawa’s OAG.

Meeting with the Thursday Group of H’Art of Ottawa right before heading into the holiday weekend was a great idea. If anyone knows a thing or two about being thankful and present in a moment of appreciation it’s these women. Open arms welcoming me and lots of parting hugs as I said my goodbyes is what I got from the women who are part of one of the Ottawa Art Gallery’s current exhibits – Open Spaces.

It’s been a busy year for H’Art. Along with the show at OAG some other members are part of the Breaking Barriers show at the Diefenbunker. H’Art was also the inaugural show (Turning the Page) at the new Gallery 101 space and H’Art artist Irene Beck exhibited at SAW Gallery.

In Open Spaces each artist of H’Art’s Thursday group got a chance to dive into the online archives of the Firestone Collection for their inspiration. OAG is now the custodian of the collection that was begun by O.J. and Isobel Firestone, an Ottawa family that valued Canadian artists. They began collecting in the 1950s and their collection expanded to 1,600 works of art. The artists in the collection include names like Emily Carr, Paul-Émile Borduas, and Rita Letendre – names that show the diversity of background and style of artists working during the 20th Century in Canada. Rotating selections from the collection are always on view at Ottawa’s City Hall Art Gallery (the current home of the OAG Annex) and at OAG’s Firestone Gallery (where this exhibit is being held) but this show engages with the collection in a unique way. Each artist was asked to pull from the collection work that they would combine in a grouping with their own. 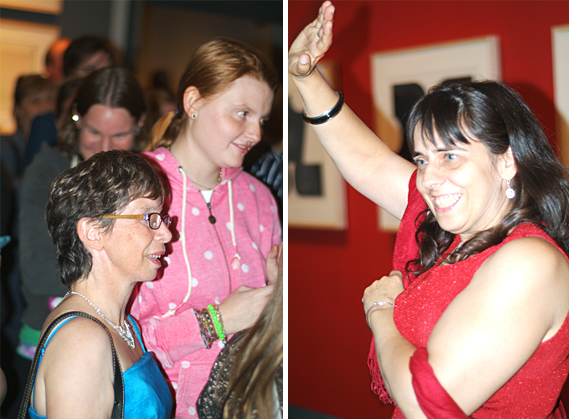 Curator Stephanie Nadeau (Curator of Public, Educational and Community Program at OAG) had already spent time volunteering with the women and had a strong rapport with the artists prior to the production of the show. Her special connection with the artists (Malinda Caron, Anna Coulombe, Jenny Francis, Carol Gregory, Christine Hammond, Jessie McComb, Debbie Ratcliffe, Alexa Vanveen, and Mandy Wellman) was evident the moment she stepped into the H’Art studio at the Bronson Studio last Thursday. It had only been a week since the opening but they expressed how much they were already missing Stephanie and her positive presence in their art practices. 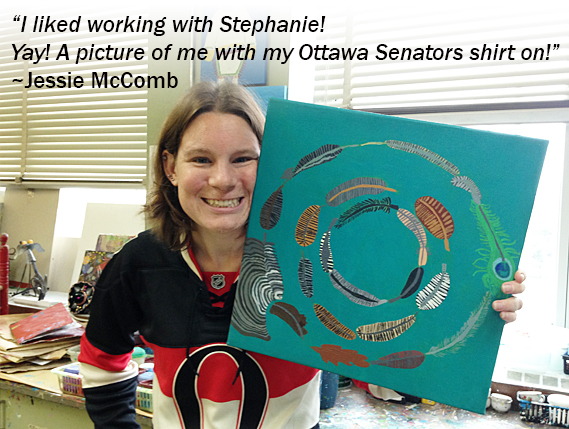 Under Stephanie’s guidance the women explored the digital archives to find works that spoke to them. Sometimes the searches were straightforward and other times more serendipitous. For Jessie McComb, who loves the ways ducks form V patterns as they fly, a random photo from a Google image search became part of her grouping that also includes works by Jacques de Tonnancour, A.J. Casson and AY Jackson. In a vitrine Jessie partnered Florence Wyle’s small plaster and iron casts Totem with her collection of rubber ducks. For her birds are the most beautiful thing and on Thursday she showed me a stunning new work of a circle of feathers looping back into each other.

An older work by Jenny Francis (The Smiling Pig) includes her signature motif of repetitive lines. The same lines are echoed in one piece she chose for her grouping – Norval Morriseau’s Bear-Fish. Jenny is a quiet spirit but her work is complicated and layered. Worlds inside worlds – you could spend hours exploring her visual vocabulary.

Debbie Ratcliffe (aka “The Dragon Lady”) likes to construct elaborate narratives in her paintings that are informed by the novels she reads.  I love Debbie’s technique of grounding the images that build her story on top of an inky background. The way she renders her colourful compositions to involve her storytelling articulates her outgoing personality. What I found interesting about the choices she made was that for how detailed her own work is are she decided to pair her pianting with simple compositions – two paintings of landscapes (Alan Collier’s Near Squamish, B.C as well as H’Art artist Malinda Caron’s Mexico) and two paintings of homes (Alan Collier’s On the Spit, Homer, Alaska and Bay St. Lawrence, Cape Breton, Nova Scotia). For Debbie the image of a home is symbolic of life. 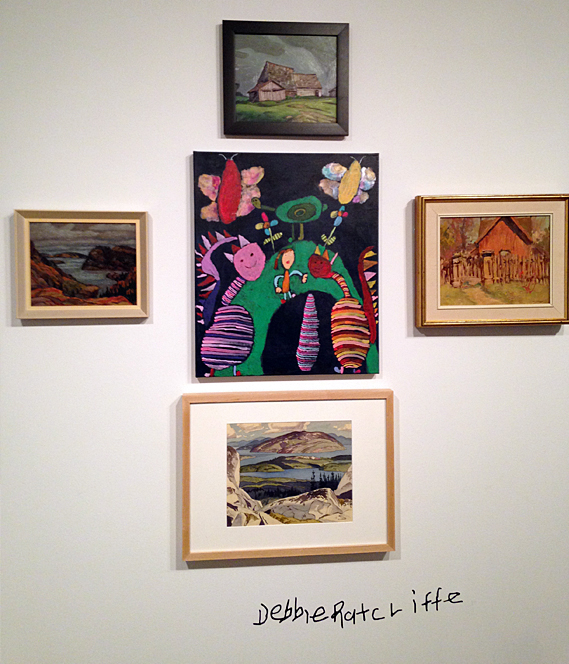 Malinda Caron selected an AY Jackson drawing of an iceberg because it made her recall a beautiful memory she had of seeing icebergs on a trip she took. It’s lovely piece that I have to say I much prefer over Jackson’s sketch! Malinda was really touched by her experience working with Stephanie, who she says is like a big sister. Along with working with her “big sister Steph” Malinda appreciates that each week she can create alongside her best friend of almost 15 years, Alexa Vanveen.

Alexa Vanveen’s way of engaging with the collection was to include a sound component. Some of the other ensembles include audio of the women sharing background about their work but here, in front of Alexa’s choices, she encourages us to have a seat and pause for awhile. Beatles tunes pump through the headphones while viewing Philip Surrey’s Listening to Music and three of Alexa’s own pieces – The Great Blueberry Pie, Strawberry Cheesecake with Lemon Squares and Music is My Life!

Relax for while and enjoy the space she has created for us to sit with the work. 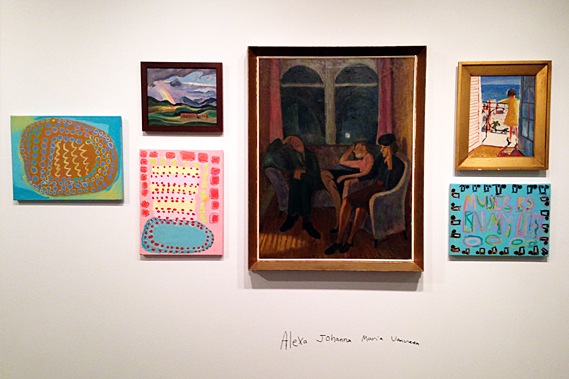 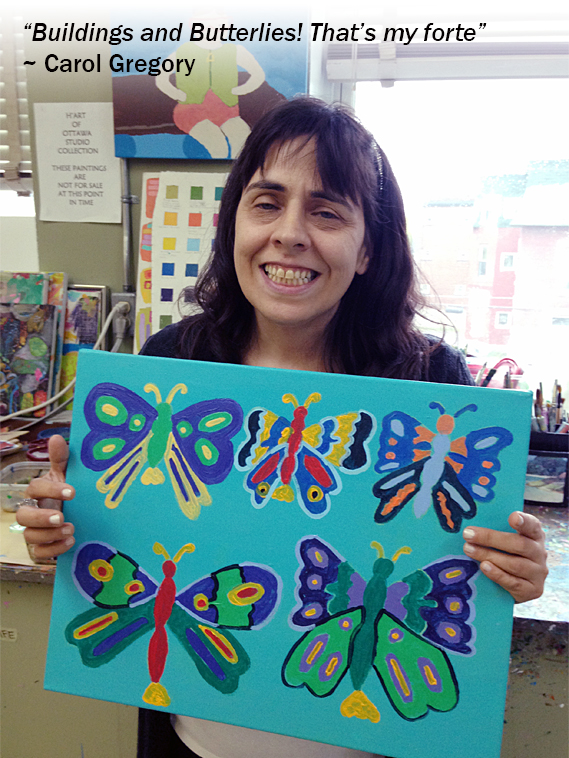 Carol Gregory rediscovered her love of architecture and passion for buildings. As a child she was an avid reader on ancient architecture. Her choices from the Firestone Collection were works of small buildings against expansive horizons but in the works she produced after engaging with the collection she reflects the contemporary reality of how Canada has shifted from a rural population to an urbanized one. Her buildings are bigger and in Happy Day in Old Montreal the horizon is completely erased from view.

Anna Coulombe is another H’Art collective artist who is interested in both landscapes and cityscapes. Her paintings are vibrant. She works with a gorgeous palette we don’t often see used to depict the landscape of Canada. I applaud Anna’s breaking with tradition and seeing the world through rainbow-coloured glasses! You can understand her selection of Marian Scott’s Quebec Fields from 1932 – kindred spirits connecting to each other through lines, form and most obviously colour!

Mandy Wellman asks us “Imagine that the sunset came close to you?” On the gallery wall beside her striking drawing of a section of the sun’s rays the question is written and posed to us. The work that she showed me at the studio was a collection of drawings on paper that incorporated great use of lines so it is of no surprise that she selected two Marian Scott works (Untitled, 1968 and Untitled, 1969) to partner with her own.

The biggest hugger of the bunch is Christine Hammond and much like Debbie, she is a storyteller as much as she is a painter. Her paintings are filled with an array of animals going about their business. Illustrative in nature, she paints what she loves most! “I had a lion fetish as a kid and still do!”

One of the curatorial decisions Stephanie made with the assistance of the group was to have the signature of each artist cut in vinyl and placed on the wall. Another way that delineates each woman’s grouping is a band of colour at the base of the wall. Each artist decided on the colour that would represent them. A decision was also made to include audio of the women’s voices speaking to us about their practice, their passions, and their memories. The group process resulted in these meaningful details that allowed for each artist to mark the space in their own individual way resulting in nine distinct vignettes of nine wonderful women.

Before we left the studio that day the group presented Stephanie with a painting they knew she admired because it reminded her of organ pipes (Stephanie’s dad is in the organ business!). “Stephanie you are someone we trust more than anyone and you are always welcome here” Christine shared from her heart then the rest of the group chimed in with their praise for a woman who has become near and dear to them.

And along with their presentation to Stephanie came numerous farewell embraces. Through them and their process as artists we can learn a lot about warmth of the human spirit. Their openness and the generousity in the space they provide is both their asset in life and the gift they give to us.

Ladies – I will be back! 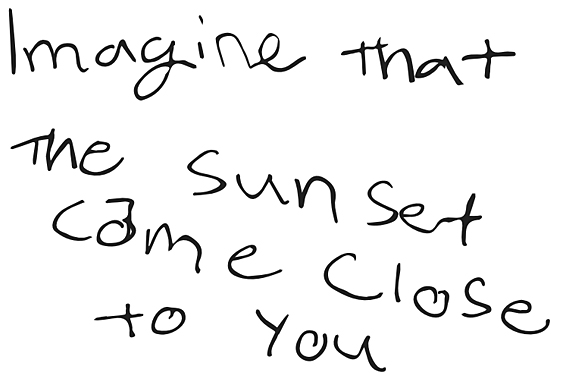