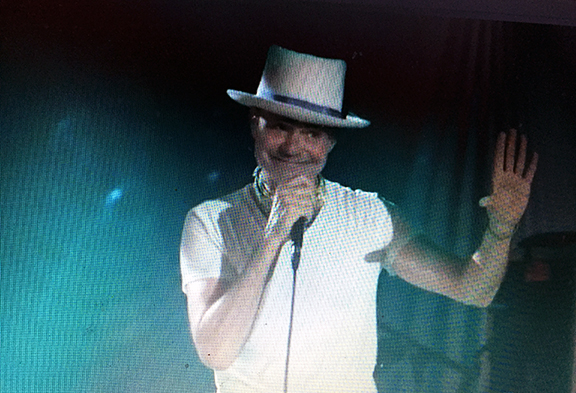 Gord Downie. My kind of man.

As a teenager, I was saving my grocery store pay cheque to get to concerts like Fishbone and Red Hot Chilli Peppers at venues such as the Concert Hall in Toronto. I remember seeing The Tragically Hip around the same time. A friend, an early and super enthusiastic fan, convinced me to go a with her. It was a local venue (The Highlands in Cambridge, Ontario) and the ticket price was dirt cheap. If I recall, it was 1989. They had just come out with their album Up to Here and were gaining lots of buzz in alternative music circles. There probably wasn’t more than 300 people in the bar that night but they played as tight as they did in Kingston at their final concert and Gord Downie moved around on stage like his pants were on fire. I was impressed. This band had presence for sure and you could tell they were about to get big. At the time, The Hip wasn’t necessarily my kind of music but I came to realize Gord Downie was my kind of man – a solid, compassionate and politically astute person who stands behind his convictions. And so, because I am a big fan of the person he is, I tuned into CBC to participate, along with so many others across the country, in witnessing an act of grace.

Last night people experienced the stellar human being Gord is. His affection and love for his band mates came through with the closeness of their body language – the way they embraced each other at the end of each set and before yet another encore. By the end of the night it was clear to everyone, if you didn’t already know, that the Hip’s frontman is an exceptional storyteller. Sometimes cryptic, other times unconcealed, whether he takes his audience deep into a mystery or documents a moment in history his songwriting sets up a scene for the listener. All can enter in and feel the emotion he evokes with words and notes. And those emotions he sings of are complex filled with longing, doubt, courage, truth, frustration as well as joy.

And so it was fitting and symbolic that this man who has protested against corporate energy giant Enbridge (Rock the Line), donated hundreds of thousands of dollars to environmental organizations (WaterKeeper) and performed in support of an Indigenous community in crisis (Attawapiskat First Nation) would confront his audience with the complicated, emotionally loaded story of Canada at a historical moment when so much anger, confusion and shame is rising to the surface. Along with those darker emotions we are also seeing goodwill and empathy. Hearts are opening.

Online, in real time, I watched my Facebook start to percolate with feeds of friends thankful that he took this very heightened and intense moment to drop a truth bomb onto the crowd.

Dr. Kahente Horn-Miller is one of those friends. A proud Kanien’kéha (Mohawk) woman from Kahnawà:ke she teaches at Carleton University in Ottawa introducing students to the concepts of Indigenous Governance. She is also a performer who re-enacts the Haudenosaunee creation story of Sky Woman. She “re-matriates” the ethnographic accounts of Sky Woman written down by white men recording what they believed to be a dying culture. She revives the story of Sky Woman by weaving in the reflections of contemporary Haudenosaunee women who use it as a guiding force for their lives asserting spiritual sovereignty. She shares:

His words connected us to the moment. All of us watching across the internet and television screens, the Indigenous and non-indigenous people who grew up loving the music, he brought us together. His last words to us mean so much. He knew the numbers of people that would be watching world wide and used that as a gift to bring his message home. “There are problems in this country…” he said. “The people way up north, that we were trained our entire lives to ignore, trained our entire lives to hear not a word on what’s going on up there. What’s going on up there ain’t good, maybe worse than it’s ever been…. We’re going to get it fixed.” I think he may be right. 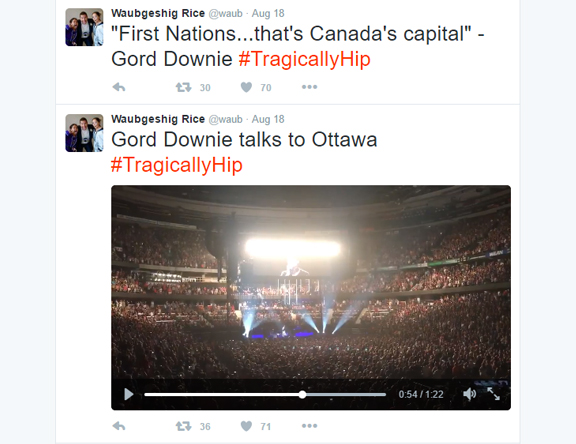 Originally from Wasauksing First Nation, Anishinaabe writer and CBC journalist Waubgeshig Rice is now based in Ottawa and was fortunate to see the second-to-last Hip show here at The Canadian Tire Centre. Although he didn’t view CBC’s livestream of the final performance he caught up with the news and comments online after the show.

It’s very heartwarming to know that with an audience of millions during what could be his last public performance, Gord Downie chose to put the spotlight on the plight of Indigenous people and the government’s responsibility to address the issues. He made few other statements or proclamations during the show, so the fact he spoke about the need to pay attention to Indigenous communities during his limited time was very moving. Hopefully Canadian leaders heed his words, and Canadian fans follow his example.

We need a different kind of land.

We need different kinds of cultural expressions and relationships to this land. So if you are a Hip fan who hasn’t considered how our environment is negatively impacted by corporate / government entanglement around natural resources or considered Canada’s complicated and hurtful relationships with Indigenous folks and the intersection where these problems all meet consider the legacy Gord Downie handed off to the audience last night.

Change lies in the hands of Canadians.

This is serious stuff. If this world has a hope in hell of surviving the climate change tipping point we have arrived at it will be because the Inuit elders in the Arctic are heard and consulted. It will be because Canadians decide that a road blockade that asserts First Nations governance isn’t an inconvenience. Rather, these kinds of actions will be understood as the original custodians of the land offering protection for natural resources. Canadians will be able to see that in the long term these actions benefit everyone living here as well as ensure the survival of the entire planet.

Protection of water, trees, and air is the most critical issue at this moment.

Gord Downie gets that. It’s why he has contributed his time and talent as well as put his money where his mouth is. It’s why he’s been a strong ally in support of Idle No More raising awareness about Canada’s involvement / non-involvement with issues facing Indigenous people living within the political boundaries of Canada. It’s why he is vocal about Canada’s not-so-pleasant past and the current realities faced by everyone living within these borders.

I would not want any part in propagating, galvanizing or burnishing some of the stupid mythology in this country – that we are this clean pristine place, that we got it all figured out, that we know best for the world, that there is nothing anyone can teach us…these things I write about…the Canada I know…I wouldn’t do it if I thought I just was propping up an old stupid mythology. (Q Interview 2012)

Last night this man who has given much to Canada in terms of fleshing out Canadian identity cautioned about the nostalgic trap ‘Canada the Good’ will land this Nation in if Canadians decide to remain comfortable in this narrative. In his role as a storyteller he summoned his audience to critique as well as re-vision what Canadian identity means. Does being a Canadian include consideration of Indigenous sovereignty and support of those working towards environmental equity? He called out his audience as well as Prime Minister Justin Trudeau to be on the right side of history, to push for change.

As a fan, where on this land do you stand?

“ABOUT THIS MAP” by the Tragically Hip

About this map, it’s a bit out of date, yeah
Territories shifted, and things get renamed
There’s coups, revolutions, and boundaries blur
Volcanoes and earthquakes turn words into birds 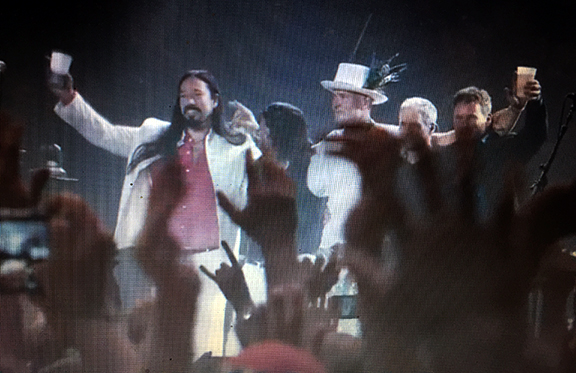