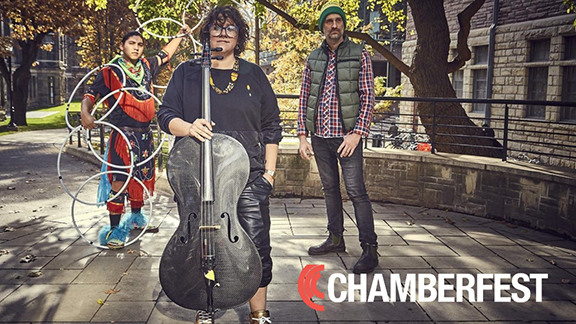 Ottawa’s CHAMBERFEST has begun and as part of the #ChamberFringe programming Chamberfest is bringing Cree / Mennonite cellist Cris Derksen to the stage. The mandate of the The Ottawa Chamber Music Society (OCMS) is to “make classical music accessible to everyone.” Acts like the Cris Derksen Trio fit the bill perfectly with Cris “weaving her classical training together with electronics and her Aboriginal ancestry” and then combining the performance with “master hoop dancer Nimkii Osawamick and percussionist Jesse Baird.” (read more…)

Cris is also known for her collaborative work with other Indigenous artists like Buffy Sainte-Marie, Leanne Betasamosake Simpson, Tanya Tagaq and A Tribe Called Red. I have seen Cris perform on numerous occasions, most recently with Cree / Dene / Irish performer Iskwé. As a cellist, Cris’ compositions add rich depth and resonance to the music of all of the artists she works with. With the addition of Indigenous hoop dancer Nimkii Osawamick Tuesday’s performance promises to be a special night for CHAMBERFEST.

“Electrified and covered in flecks of gold, you exit gasping for air.” – Weird Canada

IMPORTANT NOTE: The ticket price for this show is $30 for a single ticket. For those under 35, there are $16 #TheBuzz tickets available, and a pass for any 3 days of Chamberfest starts at $59.