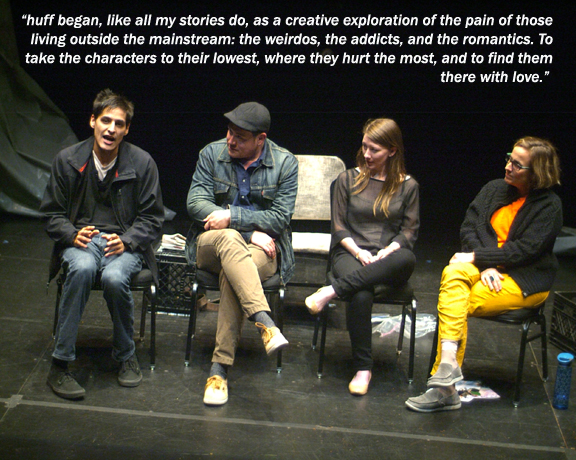 As the Q & A (Talk Back) session wrapped up after NAC’s Tuesday night performance of huff Sarah Garton Stanley (Associate Artistic Directory of English Theatre at the NAC) passionately declared “We are so proud of having this piece and it’s a piece we want everyone to see!”

If you don’t know about huff it’s a play by Cliff Cardinal that explores what he believes is the most taboo subculture existing in Canada – Aboriginal children who are addicted to solvents. And because of the subject matter the play is understandably intense and difficult to watch. Cliff’s strategy of immediately making the audience complicit as witnesses pulls people in so they can’t back out despite the uncomfortableness. It’s the right tactic because now Canadians can no longer say they aren’t aware of issues facing First Nations children. This country’s shame is ever present in the media and as witnesses we have a moral obligation to be part of the process that will lift this intergenerational burden off these children.

Local Métis artist and tour guide Jaime Koebel (www.indigenouswalks.com) was so moved by the play seeing it once wasn’t enough. She has now seen it three times in order to absorb what Cliff accomplished with this piece. She says:

“Cardinal’s ability to take on 16 characters in a one hour time span mirrors the intensity of the content within the show itself and provides a peephole’s view of life on a reserve soaked in destitution. Despite the heaviness of the subject matter, the fact that Cardinal is presenting this play at all is a testament to the resiliency of the fastest growing population in Canada.”

When a gentleman in the audience asked “Is there any way of knowing that we are progressing in the treatment of Aboriginals” panelist Rob Chief, a youth worker, answered “Cliff is here [performing the play] and you are here [watching].” Perhaps for all the steps forward that seem to follow with several steps back, slowly but surely, there is an illumination that leads out of the darkness and artists are leading the way!

A friend who accompanied me was impressed by all the interconnecting issues that were touched on beyond the issue of addiction – the educational system on the reserves, poverty as well as incest. “The parts on incest were hard to watch but these are the things we should be talking about because it is the first step to collectively contribute to the solution.”

She feels that “having these stories on stage is a good starting point to build connections between First Nations people and Canadians around the issues” and she “appreciated that all of the people on the panel mentioned that this is all of our history.” She reflects that “by watching a play like huff and talking about these stories we create the on-going dialogue that needs to happen.”

An experience that leaves you with action steps as to how you can help.

Another strategy Cliff and co-creator Elizabeth Kantor deployed was to have resources on hand for each person in the audience to leave with. These resources give lists of organizations, both Aboriginal and non-Aboriginal, that provide services around these issues. They also gives online links you can visit to read up and become more informed.

This was the most effective part of the performance – the “Talk Back” and provision of educational and support tools. So often we leave a performance (or film or lecture) dealing with heavy topics stunned by what we have just discovered but also lost as to how we can grapple with it. To create an experience that goes beyond just a performance to ensure the audience walks away with action steps as well as support is a strategy I hope to see more of.

I love that the NAC understands the important role they play in fostering these types of safe spaces! Sarah provided the audience with name after name of Aboriginal artists who “shine a path by either entering into the academy [to teach arts education with a different perspective] or not entering but teaching in their own way.” These are the cultural provocateurs who will lead this country to a renewed place.

So the future is hopeful but only if we all reach into our deepest empathetic places. I had some trouble with the play’s ending and final message that the help the main character needed lay just beyond in the spirit world because the help needed in these desperate times lies in the here and now. We need to make intentional decisions around moments when we are intimately faced with another person’s pain to that turn the experience into action.

When asked by an audience member “What do you think can be done?” Cliff addressed us all by saying “In this room you each know people who have influence, perhaps you yourself have influence. Give your time. Write a cheque. I know you can come up with something! I don’t have the answers but I know you have the solution!”

huff runs until Saturday. Performances are as follows:

Tickets can be purchased here. 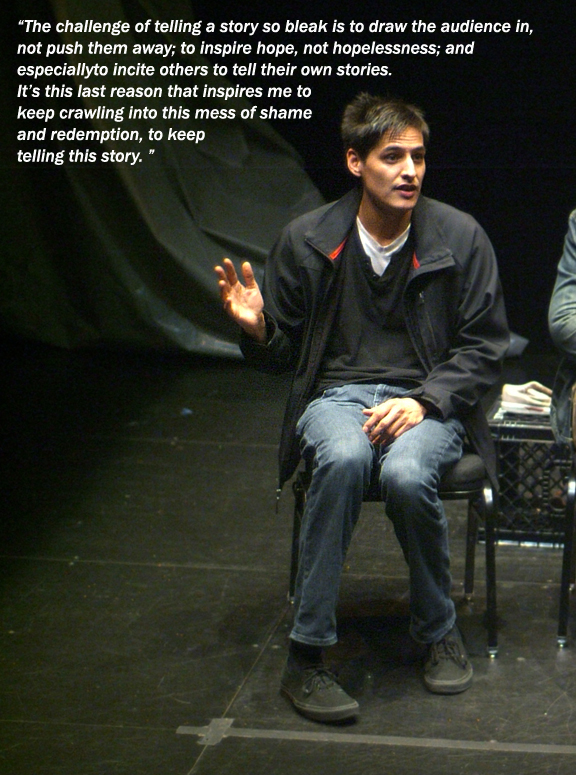