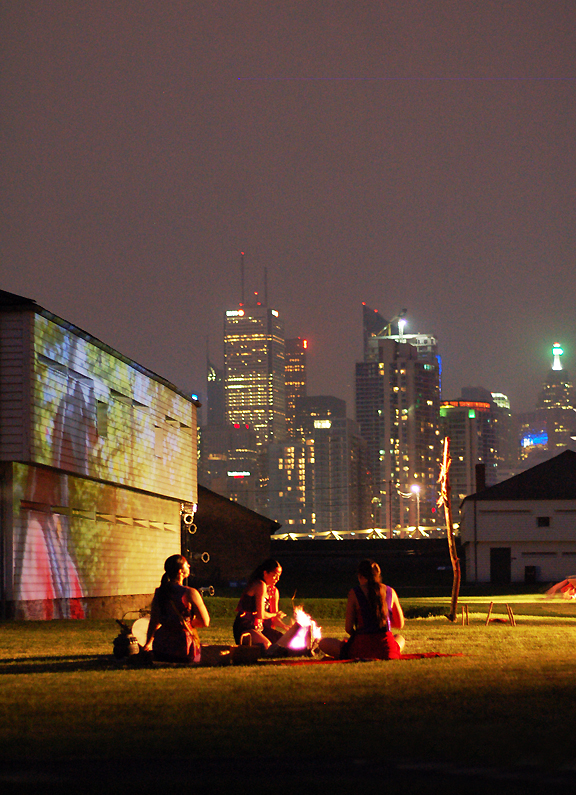 It was a mad dash to Fort York from the MacMillan Theatre just coming out of Feng Yi Ting, the contemporary Chinese opera directed by Atom Egoyan as part of Luminato ’13.

I was determined and praying to the Gods & Goddesses of Transport that they would remove all obstacles one may encounter when riding the TTC.

I made it. A little late but it was worth the sprint up to Fort York from Bathurst, camera bag and all. 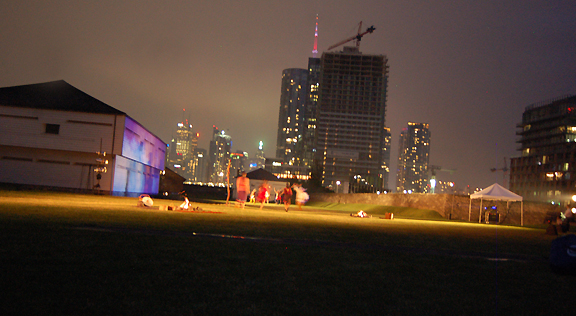 What a stunning venue! The open air, the smell of the fires, the grass covered hills, old rock walls and the cityscape in behind. The context was beautiful but the visual juxtaposition points to an unfortunate history. The Honouring is:

“a site-specific multi-disciplinary performance honouring First Nations warriors of the War of 1812, featuring Onkwehonwe families who sacrificed to protect Haudenosaunee sovereignty, culture and land. Audiences have the opportunity to understand the complexity of the War of 1812 through the experiential lens of First Nations, offering a human face to our history.  All First Nations took part in the War of 1812 as sovereign Nation allies to Britain. The Honouring pays homage to their personal sacrifices and belief in what was the best for their family, community and future generations.”  More info…

Here’s a sampling of just how stunning the work of Kaha:wi is:

As part of a continuation of MIXED BAG MAG’s post on National Aboriginal Day and the challenge put out there to Canadians to find out more about contemporary Aboriginal art here are some MIXED BAG MAG recommendations to get everyone started.

All of these organizations, programs, artists, and exhibitions work to dismantle the legacy of stereotypes that has stopped the dominant culture from seeing the dimensionality that we all carry within us as creative human beings as well as offer a critical voice regarding not only Canada’s First Peoples but Indigenous Peoples from around the world.

The below list focuses on Aboriginal arts in Canada and predominantly new media /visual artists. Stay tuned for a part two that will  include much more!

Woodlands Cultural Centre (Brantford)
“The Woodland Cultural Centre was established in October 1972 under the direction of the Association of Iroquois and Allied Indians upon the closure of the Mohawk Institute Residential School. The Centre originally began its focus on collecting research and artifacts to develop its library and museum collections.”  More info…

Installation by Roland Souliere at Urban Shaman. Image from www.rolandsouliere.com. Work by Natalie Ball at Grunt Gallery. Image from www.grunt.ca.

Grunt Gallery (Vancouver)
“Grunt is an artist-run centre founded in 1984 in Vancouver, BC, with a vision to be an international renowned artist-run centre furthering contemporary art practice. Through the exploration of our diverse Canadian cultural identity we offer innovative public programming in exhibitions, performances, artist talks, publications and special projects.” More info…

Work by Andrew Dexel at Grunt Gallery. Image from gruntarchives.tumblr.com.

AbTec (Montreal)
“AbTeC is a network of academics, artists and technologists whose goal is to define and share conceptual and practical tools that will allow us to create new, Aboriginally-determined territories within the web-pages, online games, and virtual environments that we call cyberspace.”  More info… 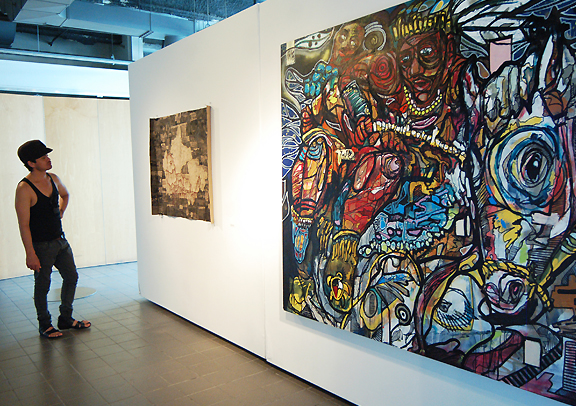 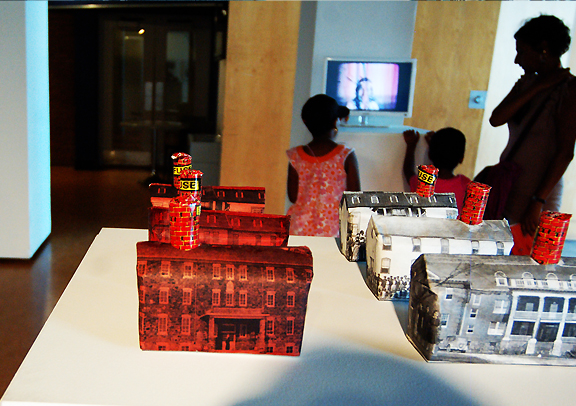 IN THE FLESH (Ottawa)
“In the Flesh examines the hierarchical relationship between humans and animals within a cultural and museological context, and investigates colonial politics, as well as issues of gender as they relate to the mastery of the natural world…In the Flesh grants us visual access to nature while calling into question the politics of representation. As the guest catalogue essayist Ariel Smith notes: “With In the Flesh, the Ottawa Art Gallery participates in a city-wide indigenization of gallery spaces to coincide with the National Gallery of Canada’s Sakahàn: International Indigenous Art exhibition. This indigenization does not exist within a vacuum, and we must reflect on the ways in which these acts of claiming space respond to and are in conversation with both the current and historical politics of Indigenous cultural sovereignty.”” More info…

Sakahàn: International Indigenous Art (Ottawa)
CURRENTLY RUNNING UNTIL SEPT 2, 2013
“Sakahàn—meaning “to light [a fire]” in the language of the Algonquin peoples—brings together more than 150 works of recent Indigenous art by over 80 artists from 16 countries, celebrating the National Gallery’s ongoing commitment to the study and appreciation of Indigenous art. This exhibition is the first in an ongoing series of surveys of Indigenous art. The artworks in Sakahàn provide diverse responses to what it means to be Indigenous today. Through their works, the artists engage with ideas of self-representation to question colonial narratives and present parallel histories; place value on the handmade; explore relationships between the spiritual, the uncanny and the everyday; and put forward highly personal responses to the impact of social and cultural trauma. The artworks range from video installations to sculptures, drawings, prints, paintings, performance art, murals and other new, site-specific projects created specifically for this exhibition.”  More info… 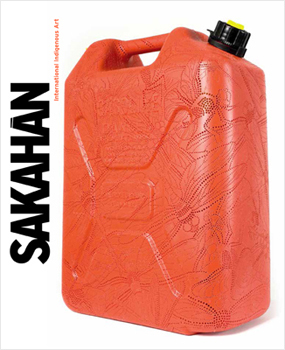 “Border Cultures: Part One (homes, land) brings together artists working locally and nationally with those exploring these issues in Ireland, Mexico, Palestine to list a few. Using drawing and printmaking, sculpture and photography, video and sound-based installations, artists in this exhibition develop nuanced critiques and perspectives on questions of nationhood, citizenship and identity in the border-lands” More Info…

Installation by Dylan Miner. Image by Frank Piccolo on wcontemporaryart.wordpress.com. 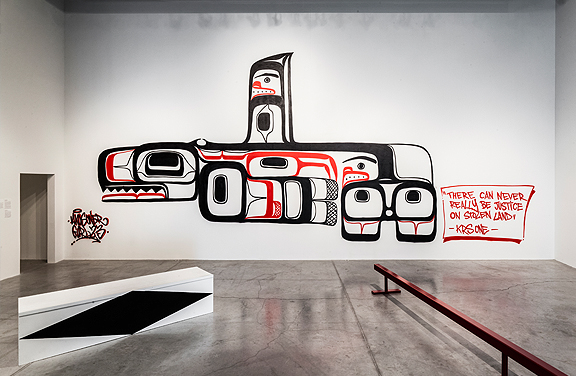 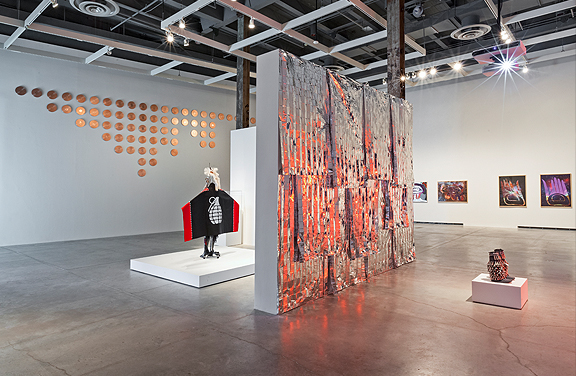 Poster for Fashionality featuring the work of Dana Claxton.

Fashionality @ The McMichael (Kleinberg)
2012
“Fashionality” is a newly coined term that refers to the visual culture and semiotics of dress and adornment. Combining the words “fashion,” “personality,” and “nationality,” it reflects the interplay between clothing, identity, and culture.”  More info…

Poster for Fashionality featuring the work of KC Adams. 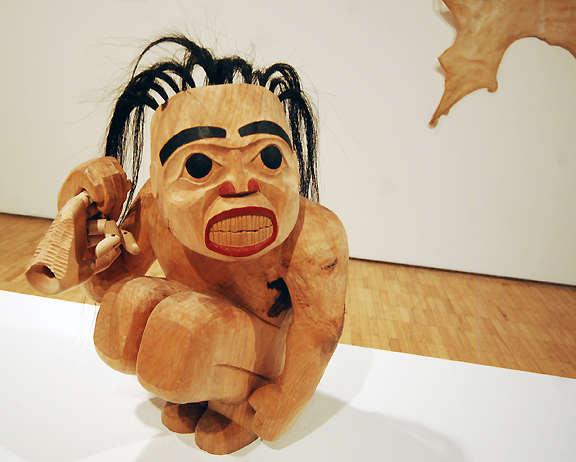 Not So Fast | NSF (Toronto)
2012
“Objects tell a story and reveal a history through the way they are made. In the current state of late-capitalism, value is often measured in terms of speed and efficiency. NOT SO FAST | NSF invites a reconsideration of time and place to present different kinds of value. This exhibition brings together works by seven Indigenous artists who address the many products and by-products of consumer society.”  More info… 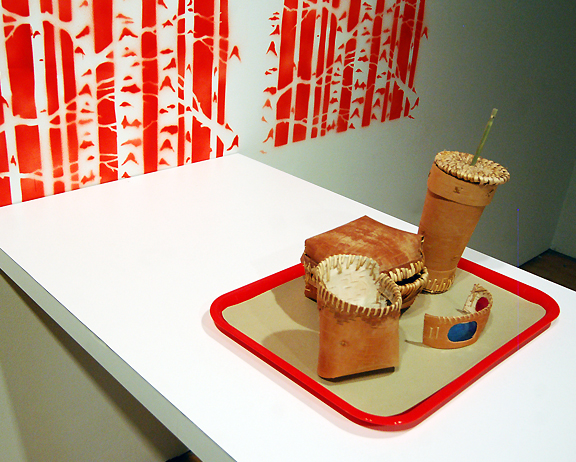 Decolonize Me (Ottawa)
2011
“Decolonize Me features six contemporary Aboriginal artists whose works challenge, interrogate and reveal Canada’s long history of colonization in daring and innovative ways. Deliberately riffing on the title of Morgan Spurlock’s film, the pop-cultural phenomenon Super Size Me (2004), the exhibition’s title emphasizes the importance of recognizing the role of the individual within larger discussions of shared colonial histories and present-day cultural politics.” More info…

Decolonize Me show at Bishop University. Image from www.ubishops.ca. 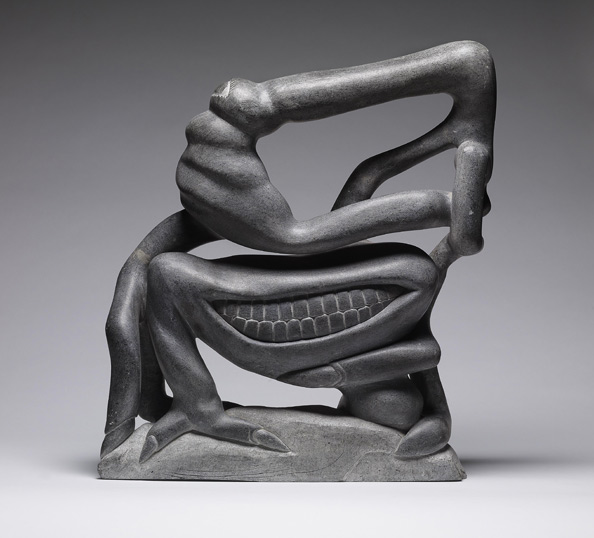 Inuit Modern @ The AGO (Toronto)
2011
“The exhibition considers how the Inuit have coped with and responded to the swift transition from a traditional lifestyle to one marked by the disturbing complexities of globalization and climate change.”  More info…

& The Inuit Modern Symposium
“Inuit artists and thinkers reflected on this statement during a three-part online symposium... It explored the questions: What are the current issues affecting Inuit art today and how has modernity complicated life in Canada’s far North? How has Inuit art changed the way that Canada and Inuit are viewed internationally?”  More on…

Image from the cover of Close Encounters Catalogue.

Close Encounters: The Next 500 Years
2011
“A banner project for Winnipeg Cultural Capital of Canada 2010 Program comprised of a large-scale exhibition focused on presenting Indigenous art from around the world. This is an incredibly important show, featuring the work of a number of renowned Canadian Indigenous artists, complemented by some of the most innovative and engaging work drawn from Indigenous populations across the globe” More info…

The content on MIXED BAG MAG is about exploring the possibilities of what a new cultural landscape could look like in Canada. The people in projects listed above are our contemporary storytellers that are assembling an inspired mythology that has as its centre core values regarding the protection of our peoples and our environment.

Aboriginal cultural provocateurs are playing a key role in compelling Canadians to re-think identity and the national narrative. 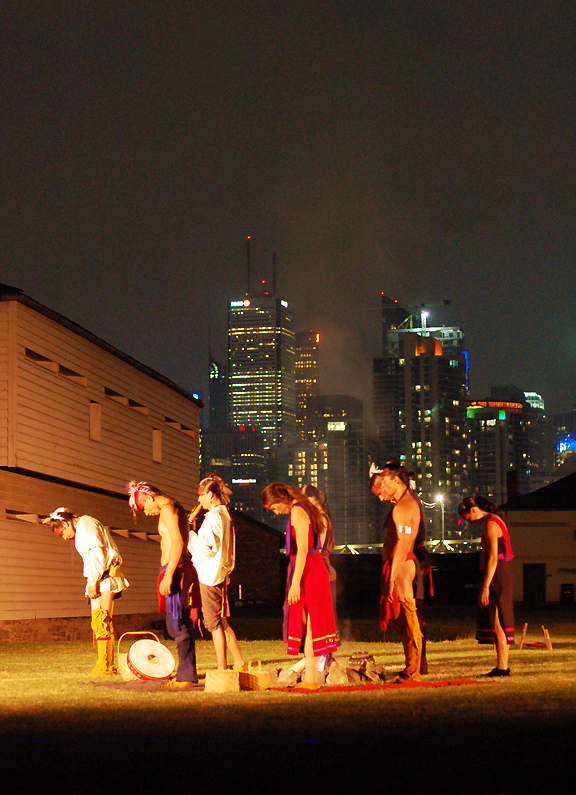